Kelly Macdonald starring as Mrs Walker and Andrew Scott as Lazlov, with me, Sophie Neville, as a dithering lady in a hat and rusty-coloured jacket getting into the steam train behind Roger at Portsmouth Station. Blink and you’ll miss me.

So opens the new film version of Arthur Ransome’s story ‘Swallows and Amazons’ (2016) directed by Phillipa Lowthorpe, which is coming out in cinemas around the UK on 19th August.

Meanwhile, here’s one I made earlier:

For news of all things ‘Swallows and Amazons’ please click here 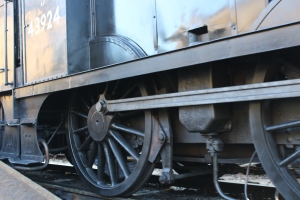 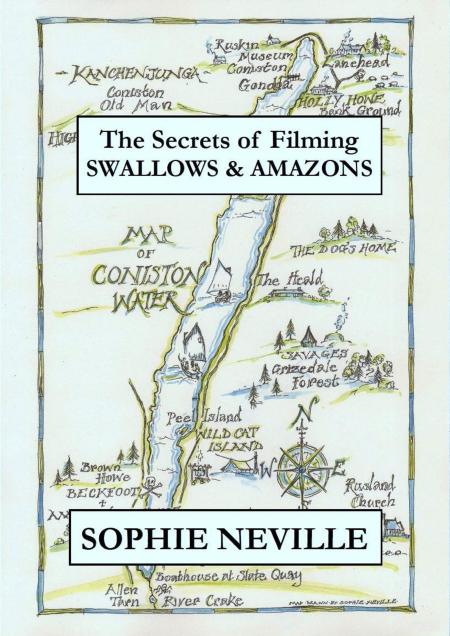 If you would like to know how the movie of Swallows & Amazons (1974) was made and know where the real locations can be found, ‘The Secrets of Filming Swallows & Amazons(1974)’ is currently available as an ebook on Amazon and Smashwords for £2.99.  The paperback was launched to mark the 40th anniversary of the film’s release and is available online here.

The paperback, which is suitable for any age group, is based on the diary that I kept when I played the part of Titty Walker in 1973. It is illustrated with behind-the-scenes photographs and memorabilia such as one of the tickets to the Royal Gala premier in Shaftesbury Avenue held on 4th April 1974. You will also find out what the actors who played the Walker family ~ the Swallows ~ are doing now.

The joy of the ebook is that it includes a number of home-movie clips that my parents took of life behind the scenes that you can play wherever you have internet access.

If you have any questions about making the film, please add them to the comments below, and I will get back to you.

There were rather over-excited headlines in the Times and Telegraph when the ebook was launched but they only spoke of the legendary drinking of Ronald Fraser. Please don’t worry – there is nothing X-rated about the book – it is just the price one pays for half a page in a daily newspaper, especially since it came out on a Saturday. 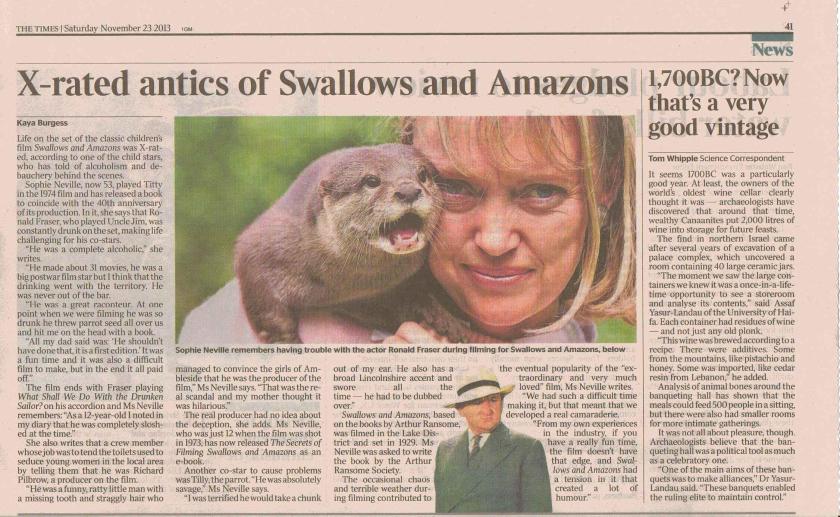 The ebook has been doing well in the Amazon charts and hit Number 1 in the category ‘Stage and Theatre’. 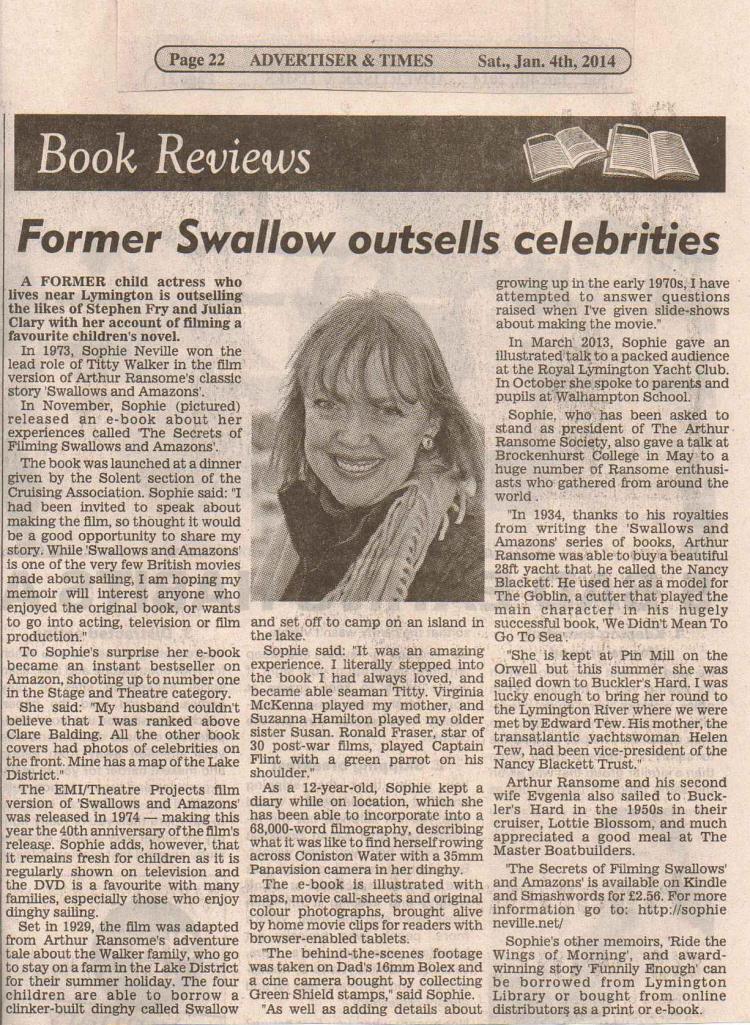 A preview of what the book holds in store can be watched here:

‘The Secrets of Filming Swallows & Amazons’ – the book trailer

Very many thanks to all those who have left customer reviews on Amazon. It is always exciting to find out how the book has impacted others, especially those who love the Arthur Ransome books.

The classic movie of Swallows & Amazons is often broadcast on BBC TV. If you would like to know more about how the film was made you can find the details on this site or leave any questions in the comments box below.

To read about our first day’s filming at Haverthwaite Railway Station click here and keep reading.

Do you know what lake we were on in the photograph below?  We were busy loading urns of tea into a run-around boat to take out to the film crew who might have been on Cormorant Island. If you click on the photo you will get to the page of my diary, kept in June 1973, which describes this day.

There are still many questions about the making of the movie that remain unanswered.

This shot was taken while setting up the scene at Peel Island when Captain Flint brings Sammy the Policeman to question the Swallows.  If you click on the photo you will find the photograph that the journalist ended up with. Titty’s hand is still on Captain Flint’s arm.

Making a movie is very different from watching one. Here is a record of Titty rehearsing the shot when she moves the camping equipment for fear of a tidal wave. It was a cold day on Coniston Water. The jersey came off when they went for a take.

The location used for Beckfoot and the Amazon boathouse can be found at Brown Howe on the western bank of  Coniston Water. If you click on the photograph of Peggy you can read more about what happened that day.

You can read the full story about the making of Swallows and Amazons here:

My mother, Daphne Neville, who worked on the crew of  Swallows & Amazons (1974) is appearing in Summer in February, which is now out on DVD. Although she’s a hustler, invitations to take part in both films arrived out of the blue. Here she is 40 years on  with Dan Stevens and Dominic Cooper ~

My mother and I reached Ambleside in the Lake District in what must have been Mum’s Renault 5. I know it was packed to the gills. We found the Oaklands Guest House, a solid stone Edwadian house that the film company had booked us into, along with the other children in the cast.

The cast ~A striking girl called Kit Seymour, who came from London, was playing Nancy Blackett, ‘Captain of the Amazon and terror of the seas.’  Her sister, Peggy Blackett, was played by Lesley Bennett.  Simon West, who was playing my brother John Walker, came from Abingdon. He held a National Optimist title and was an excellent sailor. Suzanna Hamilton, who came from Islington where she went to Anna Scher’s theatre group, took the role of  the very practical Susan. The part of our younger brother Roger had been given to  Sten Grendon, who had played the young Laurie Lee in the BBC Play Cider with Rosie, which I had also been in.  He came up from Gloucestershire with his mother Jane, who was to chaperone us with Mum.

The director ~As my diary relates, were were taken for tea at the Kirkstone Foot Hotel to meet Claude Whatham, who was directing the movie.  He was a small man, habitually clad in jeans, with a denim jacket.  He seemed young and trendy for an adult.  Sten and I had worked for him two years previously on Cider with Rosie  and the others already knew him from the weekend sailing audition.   Claude had just finished making his first feature film, That’ll be the Day, starring David Essex and Ringo Star. He went on to become a revered and prolific director with a long list of credits including the TV mini-series Disreali, Play for Today, Tales of the Unexpected, C.A.T.S. Eyes and the adaptation of  Mary Wesley’s book Jumping the Queue. Mum took me to Yorkshire to watch him making the moive of James Herriots’ vet story All Creatures Great and Small, starring Anthony Hopkins and Simon Ward. He went on to make the feature films Hoodwink (for which he was nominated for an AFI Award), Murder Made Easy and Buddy’s Song, but for all that, Cider with Rosie  (for which he received a BAFTA Nomination) and Swallows and Amazons remain his best known works, with terrific DVD sales. Somehow they never felt dated. 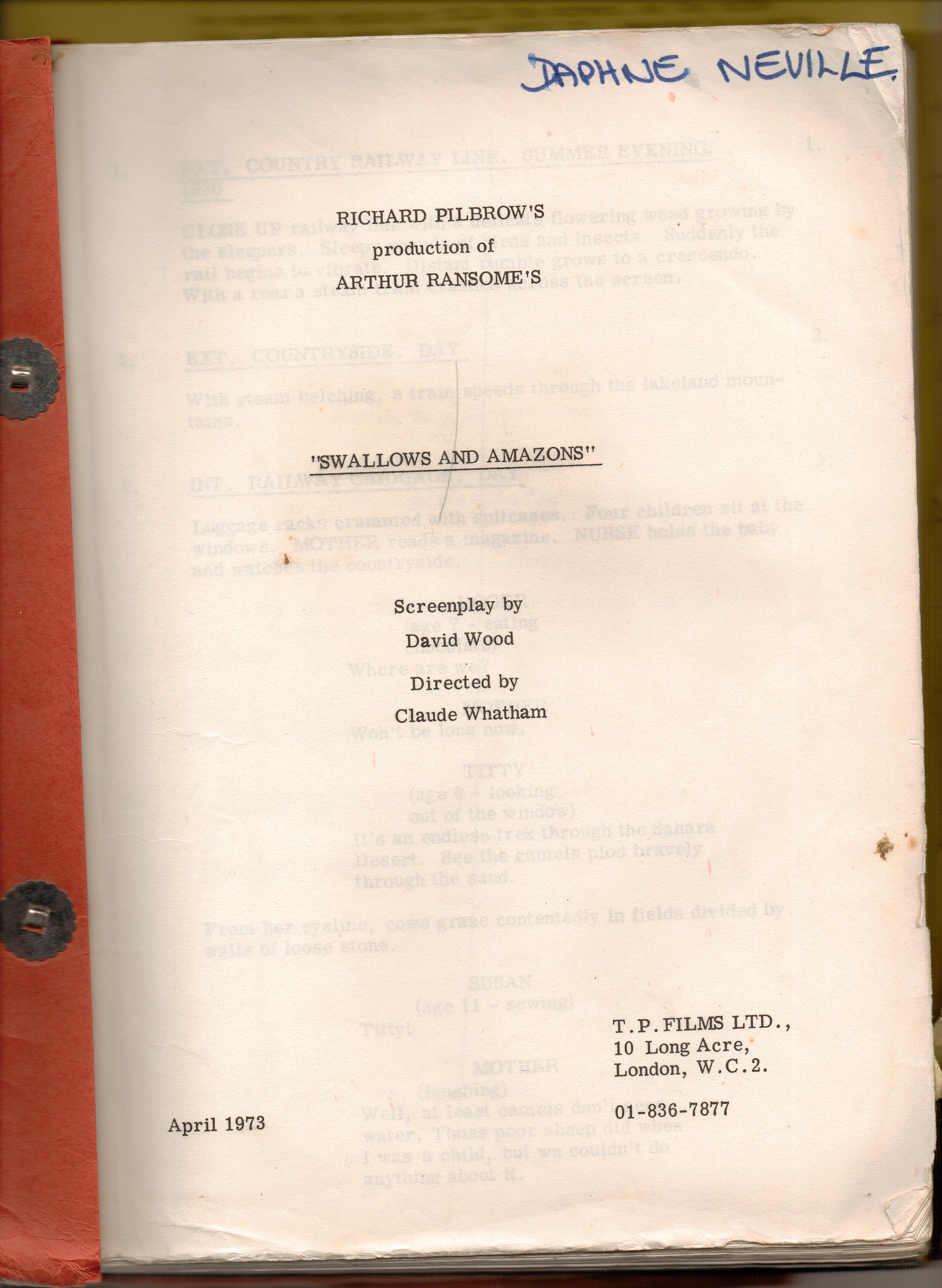 I can only think that we were thrilled to hear that we would not be learning lines, never realising it was Claude’s key to gaining natural performances out of us.  His other secret was that he never allowed us to see the ‘rushes’ – film that had just been recored – as  he thought it might make us self concious.  I learnt later in life that he was quite right.  We were also encouraged to start using our character names, which is something we enjoyed. I knew from my parents that Claude had wanted to cast children who didn’t go to stage schools.  I think he chose us for our spiritedness as much as anything else.

The producer had been keen that we could all sail and swim well and  Claude looked for children who were members of sailing clubs. I don’t think he realised until we were out on the lakes in gusty weather how deeply he valued the confidence in sailing dinghies held by the children playing John and Nancy.  They were so good that there were times when they told him what to do.  That amused him.

One thing that amused me intensly was watching the large colour television at the hotel. I’m not sure if I had seen one before.  They were hugely expensive in 1973 and considered a great luxury. The set, which had a wooden veneer, stood on legs and showed all three channels – BBC One, BBC Two and ITV.  We all thought it was amazing. That dates me and the period, doesn’t it?