Arthur Ransome’s book was adapted for the big screen by David Wood.  The first time I saw this script was early in 2011 when my mother pulled it from the back of a wardrobe. It’s really only now that I fully appreciate how beautifully it was crafted.

The film opens with a shot of a steam train passing through Cumbria. This does not feature in the book but was a powerful first image and good way of introducing the Walker family, setting the period and the very Englishness of travelling up to the Lake District for the summer holidays. It was a wonder that this was possible; The Lakeside and Haverthwaite Railway , with it’s restored steam train, had only been open and running for two weeks ~ on 2nd May 1973 to be precise. It was a private concern run by a bunch of enthusiasts on the old Furness Railway branch line. The engine was a Fairburn 2-6-4 tank locomotive of 84 tons, of approximately 1930s vintage, standard guage and coloured black-berry black

~ The crossings out were made by my mother, in the tradition of marking a scene that has been recorded ~

What I never knew until I read the third scene today was that we added quite a bit of dialogue. I can’t remember if it was improvised or given to me by Claude but I said quite a bit more than was scripted, and recoded the fact in my diary. 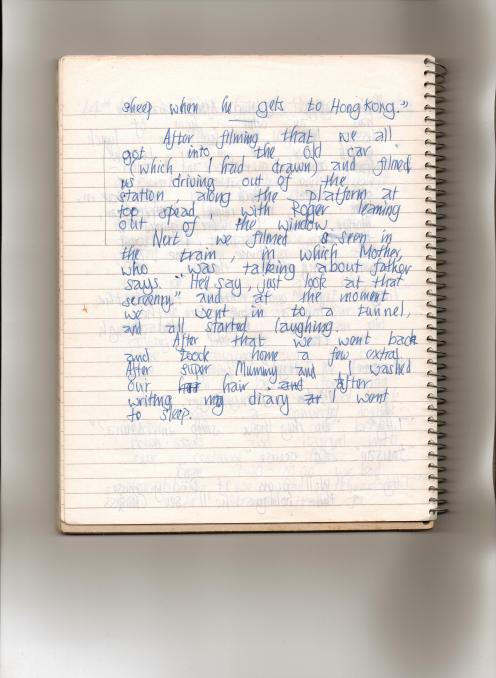 Claude Whatham was keen to shoot the film in ‘story order’ as much as possible as he thought this would be easiest for us to comprehend. INT.RAILWAY CARRIAGE. DAY was, however, a difficult scene to execute. Once the railway carriage contained movie lights, the director, a huge 35mm Panavision camera, the cameraman and assistant, with microphones and an assistant sound recordist there wasn’t any room for me.  When it came round to the shots of me I had to give my lines to imaginary family members. They were no longer there – the camera had taken their place. It also got extremely hot.

I look back on all this now and feel our opening performances, so vital to capture the audiences attention, were understandably rather wooden. Later on, when I was directing films that featured children I tried to schedule unimportant, ‘running around scenes’, which were easy for them, so that they could get used to working with the crew before tight close-ups were required.  I found that even six year-olds were unfazed by recording scenes out of story order, in fact they were probably less disorientated than the adults.

With Virginia McKenna’s magazine, our picnic and Susan’s tapestry the matter of continuity in this scene was important. We greatly enjoyed learning about this technicality, so vital if the shots that make up the scene are to cut together smoothly. Numerous Polaroid shots were involved, which was exciting as these cameras had not been around for long and we enjoyed watching the photographs develope.  We did our best to be helpful and keep an eye on the picnic, but somehow it all went wrong. The continuity in this opening scene is out. This probably because Sue Merry, the Continuity Girl could not get in –  into the railway carriage, that is. There was simply no room for her.

3 thoughts on “‘Swallows and Amazons’ the screenplay of the 1973 film, adapted from Arthur Ransome’s book by David Wood”