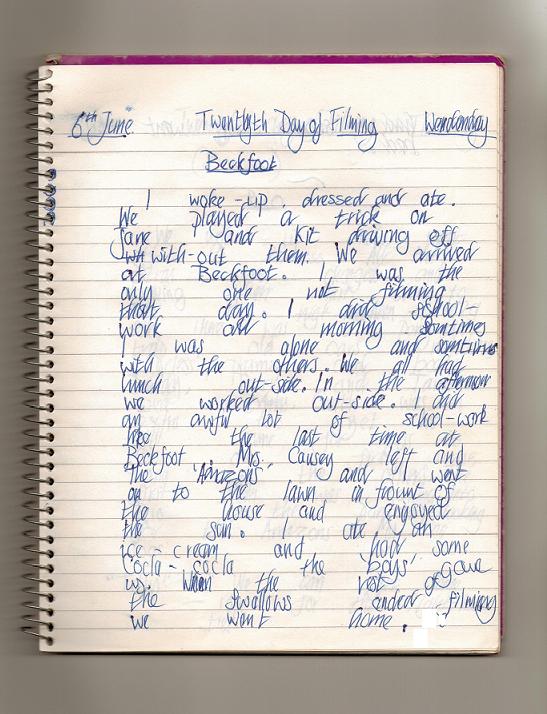 A hot sunny day in the Lake District, at last. This was 1973 and Mum had a blue sunhat firmly wedged onto my head. I suppose this was so that I wouldn’t go pink. It was lovely to be able to eat lunch outside under the rhododendrons with my sisters but I started to roast in my stripy acrylic polo-neck jersey and begged to be able to wear something cooler. Terry Smith the Wardrobe Master was not pleased when he found me wearing one of Suzanna Hamilton’s costumes, especially since I was eating a choc-ice in it.

Mrs Causey, our long suffering Tutor, was helping me to swot for the summer exams we knew being sent north from my school. These were taken very seriously. My father was still paying my fees. They amounted to as much as I was earning for appearing in the film. I don’t think my little sisters had any formal education at all that week. I can only suppose that they learnt a little more about being in films even though this was the one day that I didn’t appear in Swallows and Amazons.

Who were the boys?  The lad in the film clip with a Motorola and cigarette, who seems to have taken off his shirt for the first time that summer, is Gareth Tandy, the Third Assistant. The boys mentioned in my diary were slightly older. Why did we call them Prop-boys? Is it something left over from the theatre? I know Bobby-Props ~ Bob Hedges ~  must have been over 40 and was regarded as the father figure of the unit. He worked out of a lorry with a sunshiny roof with John Leuenberger, Terry Wells and Bill Hearn the carpenter. Dad caught them on film when they were having lunch. I think they must have later gone off to Bowness to help set up for our big scene the next day and kindly returned with ice-creams and Coco-cola, which would have been a great treat. They were generous to a fault.

The Prop-men on Swallows and Amazons have movie credits to their names which would delight any actor. They never seemed to stop working. Claude Whatham may well have asked for them to join us as they’d all been on the crew of  his first film That’ll be the Day.  Bobby Hedges later worked with some of the others on The Rocky Horror Picture Show, Julia, The Shout and Midnight Express. John Leuenberger went on to work on Stardust, Bugsy Malone, Chariots of Fire and Superman III.  Terry Wells is listed as having been the Property Master on amazing movies such as The Mission, Braveheart, Quadrophenia, Cry Freedom, Full Metal Jacket, Troy, 101 Dalmatians and the most recent Robin Hood starring Russell Crowe and Cate Blanchett, as well as big TV series such as Holby City and The Increasingly Poor Decisions of Todd Margaret.

If you look at our Call Sheet for the day you can see at a glance how important the Property Master’s job was. Swallows and Amazons was a technically unusual film as the dinghies were action props. Swallow had to be kitted out with exactly the same rigging – plus the same ‘continuity props’ – the torch, compass, whistle, charts, blankets and provisions, originally listed by Arthur Ransome, that were in the little ship when she left Wildcat Island in the scene when John gave me the telescope. 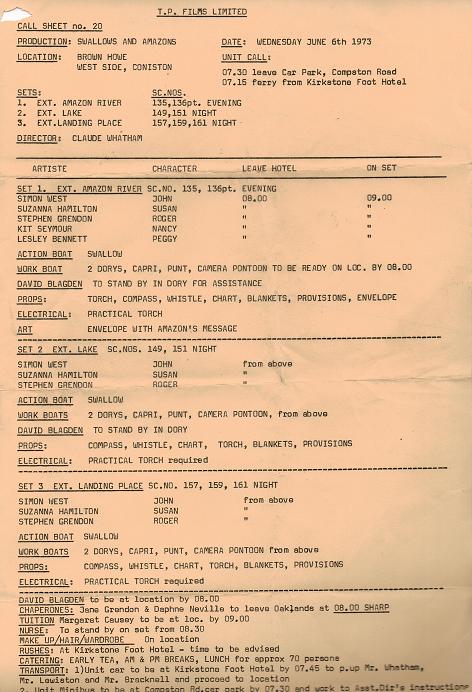 In Scene: 135 the envelope containing the Amazon’s message is key to the action, thus an Action Prop. If we’d seen it before it would have been known as a ‘Continuity Action Prop’. You can see it pinned to the post in the short film clip. Simon Holland, our Set Designer, to whom the Prop-men were working, had a number of identical envelopes made. Lesley Bennett, who played Peggy Blackett, wrote the message in her clear, italic writing quite a few times so that there would be replacements for re-takes after John scrunched up the first one and flung it in the water. There are times when a continuity action prop such as our telescope, which was irreplaceable, becomes very precious indeed.  Had it been forgotten or lost it would have caused major disruption to the day’s filming.

There was very little ‘set dressing’ for theses scenes but you can understand that it was crucial that the guys mounted Captain Nancy’s scull and crossbones on the Amazon boathouse. They would have taken this off at the end of the day and stored it in case re-takes were needed, which is why the carpenter returned from Bowness with a long ladder in the lorry and ice creams for us all.

We loved the props as children. I treasured the few items that Bobby made on the set and gave me at the end of the filming, such as his prototype flags. When I became an Assistant Floor Manager, the BBC’s equivalent to a Second Assistant Director, I found myself responsible for the Action Props with one or two prop men working with me. The few times that continuity props were forgotten or mislaid are painfully etched on my memory. That awful feeling, when a lost item effects so many people, like losing a wallet or your car keys, is magnified hugely when filming is so costly and involves so many. Despite always being terribly careful I had a continuity prop stolen from the Eastenders’ studio (see my ‘Career’ page and scroll down until you find the section with William the pug dog).

Someone once stole the soap from the set of Bluebell. I can’t think why. It was a miserable little piece for a scene set in Bescancon Internment Camp. Prisoner of war soap. The Prop-buyer got very angry. I quickly made up something that looked like the original but I couldn’t do the same when our Prop-man lost Gerald Durrell’s pre-war binoculars on the island of Corfu. I remember him turning out his van in despair before finding them carefully stored in bubble-wrap behind his seat. I don’t think any of the props were mislaid on Swallows and Amazons, despite all the rushing around in boats, but Mum says that we shot a scene wearing the wrong costumes.  We are not sure which this was but no doubt it will be recoded in the later pages of my diary, which you can read here…