If you ever see a cormorant you must sing out, ‘They’ve got India-rubber necks!’

And then, if you are on a long journey you can add, ‘ Cormorants. We must be near the coast of China. The Chinese have cormorants. They train them to catch fish for them. Daddy sent me a picture.’

If you ever get lost – or the journey really is a long one, you can say,

‘Here we are intrepid explorers making the first ever voyage into unchartered waters. What mysteries will they hold for us? What dark secrets will be revealed?’

They were most complicated speeches to deliver afloat, ones I had to learn.  In the end the second part was heard OOV – out of vision. I could have read the lines.  But then they wouldn’t have stayed in my head forever, as they have.

If, on your journey, you happen to see a man sitting in a chair writing notes you score high and can say, ‘What’s that man doing?  He’s probably a retired pirate working on his devilish crimes.’

(I’m a bit hestitant about that one because my Aunt Hermione really was approached by pirates when she was sailing round the world. The Daily Mail published her dairy chronicling the adventure; a full page double- spread with photographs no less. Rather sadly they ran  headline ‘Intrepid Pensioners…’ What a swizz. She should have lied about her age and said she was 27 instead of 60. Well perhaps 57, what with the photos.)

The scene behind the camera that day on Derwentwater was rather different from from the scene in front of it. 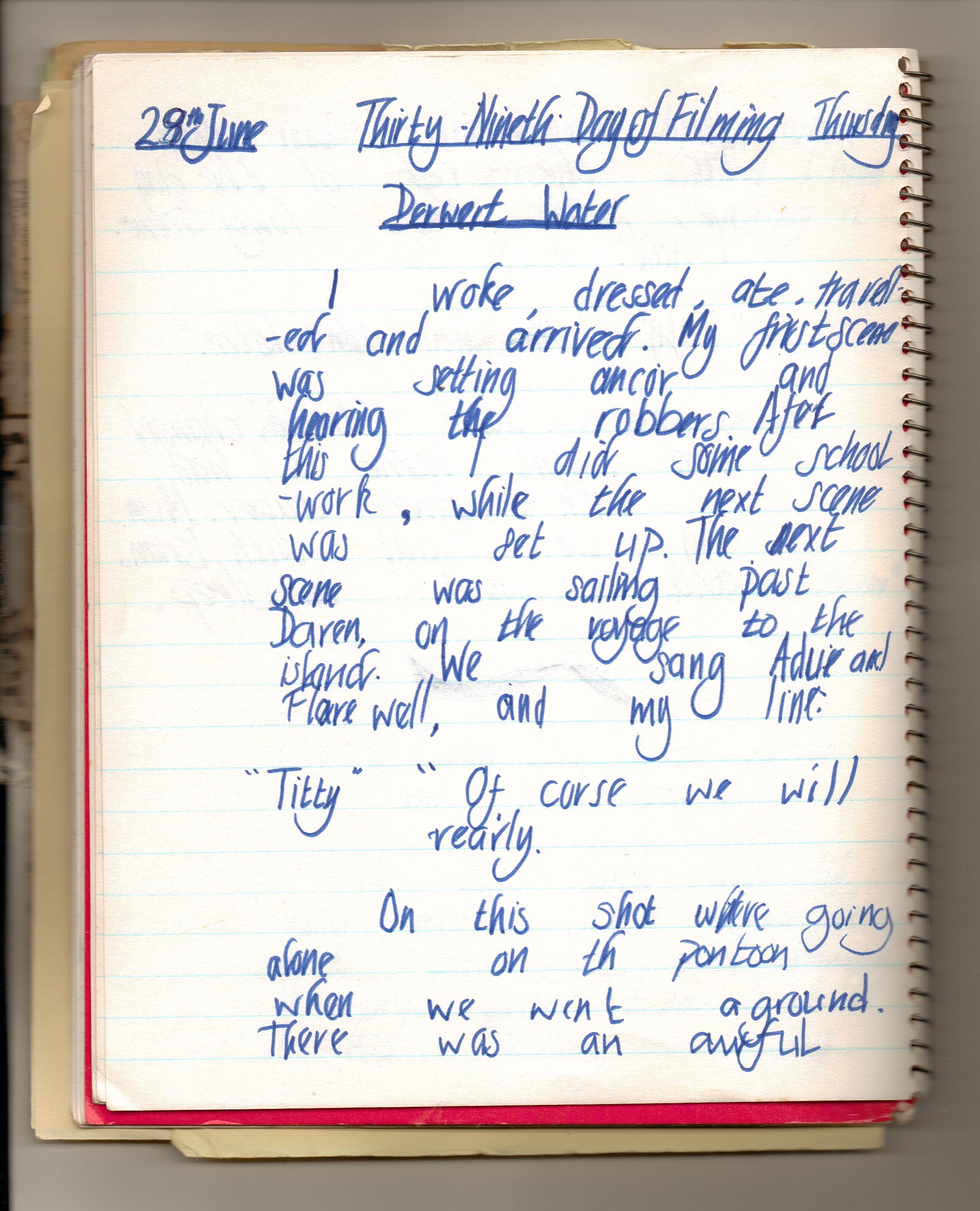 I’m pretty sure that the photographs below were taken this same day. Please let me know if the far bank is indeed Derwentwater or if I am mistaken and this was shot on Coniston.

I got cold sailing but it was a glorious sunny day with a fair wind. We achieved a huge amount even if Cedric fell in. As you can see, some of the boatmen and crew were wearing life jackets, others were not – including my mother. We wore BOAC life jackets for rehearsals but Swallow is a safe little boat – her keel ensuring we didn’t capsize if we happened to jibe and we never fell in. The pontoon was really rather more dangerous being a raft with no gunwale. Any one could have misjudged their step and plopped overboard. Luckily we were not stiffled by Health and Safety in those days – only the rigorous demands of movie insurance companies.

I’m sure we had already shot the first two scenes of the day when I was in Amazon, setting the anchor and later hearing the robbers. I expect Claude needed to re-shoot for technical reasons. Day-for-Night filming requires clear, sunny days and he would have needed still water.

I have some of my father’s 16mm footage showing us at around this stage in the filming. It was shot on a different day but shows us on the shores of Derwentwater, waiting around before rushing off across the lake in motor boats to finish filming before Claude lost the light. You see the pontoon and a safety boat towing Swallow, me snapping bossily at Roger to get a move-on, (unforgiveable but I was 3 years older than him and irritated to distraction), the third assistant Gareth Tandy in blue with glasses, our sound recordist Robin Gregory throwing his arms wide open, Kit Seymour and Lesley Bennett by the lake shore, David Blagden with his short hair-cut splicing rope, me in my Harry Potter-ish blue nylon track-suit top with Albert Clarke the stills photographer, Swallow and some mallard duckings.

If you are enjoying this blog, please find an expanded version of the story in the ebook, available from all online retailers such as Amazon Kindle for £2.99 and on Goodreads here It has also been published in two illustrated paperback versions, which make good presents.