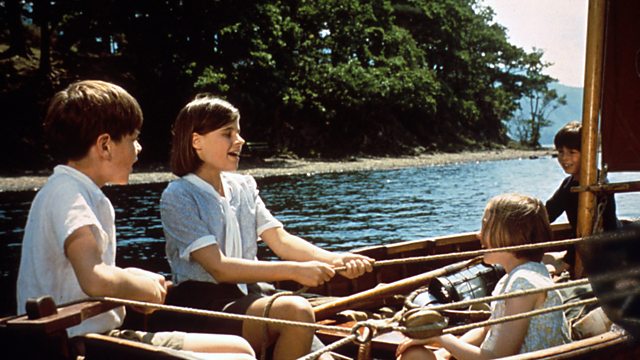 If you enjoy ‘Swallows and Amazons’ do think of joining The Arthur Ransome Society who often visit the film locations or the Arthur Ransome Group on Facebook where you will meet like-minded people – of all ages. Most are dinghy sailors who love the books.

At least one film fan held a TV party with and 1930’s theme to celebrate. Others stoked up the wood-burner and settled down to spend an afternoon re-living summer in the Lake District. It is as if Christmas wouldn’t be Christmas without ‘Swallows and Amazons’ – a timeless classic to watch again and again.

For the latest edition of the paperback on ‘The Making of Swallows and Amazons(1974)’ with details of where the film was made and what those who appeared in it are doing now,  Please click here

The ebook, entitled ‘The secrets of filming Swallows & Amazons (1974)’ is the same with a few more stories for adult readers and has links to behind-the-scenes cine footage. It can be downloaded from iTunes, Smashwords, Kobo and Amazon Kindle

It would be lovely to hear from anyone who saw it in the cinema when it first came out in cinemas in the summer of 1974 – more than forty-five years ago.

Simon Hodkin kindly sent in this cinema programme that he has kept since watching the movie when he was a boy growing up in North Wales. 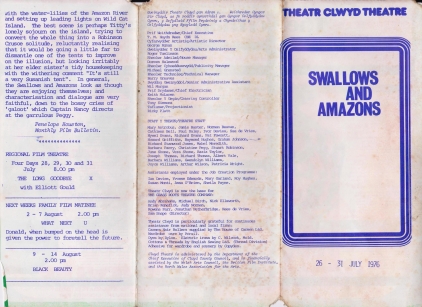 Can anyone remember the films scheduled later that long hot summer of 1976: ‘The Long Goodbye’ (1973) with Elliott Gould, Nina van Pallandt and Sterling Hayden, ‘What Next’ and ‘Black Beauty’ starring Mark Lester?

Arthur Herbertson managed to track down these rare publicity sheets for ‘Swallows and Amazons’ typical of movie games of the period:

Arthur has a collection of the four jigsaw puzzles and the Puffin paperback that came out with the film.

There was a vinyl LP narrated by the screenwriter David Wood that you can still purchase. 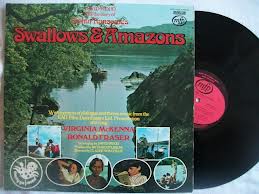 Arthur found a publicity brochure that I had never seen before. 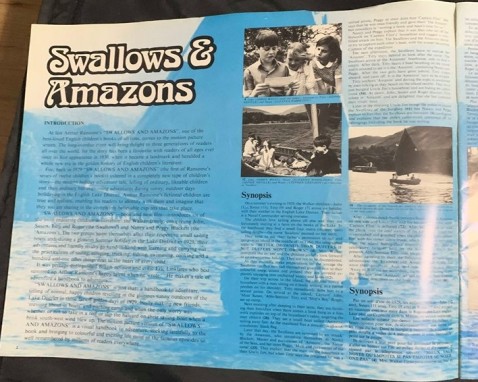 To read comments from people who saw the film at the cinema in 1974, please click here

The original story was written by Arthur Ransome in 1929 ninety years ago, so the film hits the half-way mark between the original readers and today’s audience.  It’s funny, the critics in 1974 are asking the same question as raised in the billing this week: Do ‘modern youngsters struggle to relate to such old-fashioned game playing’?

Do add your thoughts to the comments below. 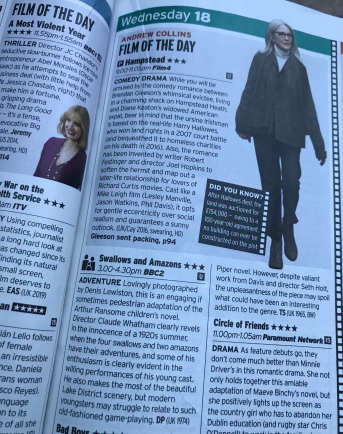 ~Billing in the Christmas edition of the Radio Times 2019~