As you can see from these paintings, Fadi Mikhail, the artist famous in the UK for painting one of our Christmas stamps and being commissioned by the Prince of Wales, as well as the Duke and Duchess of Cambridge, was certainly inspired by the film of ‘Swallows & Amazons’ made in 1973. He has kindly let me publish this remarkable series of paintings.

Since my last post, comments have flooded in as to why the simple story is so popular:

‘…the Swallows don’t own ‘Swallow’ – they’re having a farmhouse holiday and the boat belongs to the farm, and that could just have happened to any of us. Norman Willis… used to rise up against critics who considered that children from poorer backgrounds should read books full of gritty reality related to their daily lives: he pointed out that they wanted to escape from their daily lives for a few precious hours, not always into a zone of dragons and princesses but into an alternative realistic world.’ Jill Goulder of The Arthur Ransome Society.

‘What I liked most about these stories was that the Swallows and Amazons and their friends behaved like real children, but lived in a completely different world from the one I inhabited. I’d camped with the Girl Guides, but the Swallows and Amazons had astounding freedom – camping alone on an island, going out at night and sailing wherever they liked without needing to ask permission.’ Emily Lock ‘…the books gripped my imagination forever’. Please click here to read Emily Lock’s full review.

Christopher Tuft thought the enduring success is, ‘Because it’s a wonderful adventure story, with well rounded characters, played out in a beautiful setting, reminding us of a time now gone.’

‘The combination of practical realism – everything that happens could happen – and the child’s viewpoint makes the story and it’s sister volumes almost unique even now,’ Andrew Craig-Bennett of The Arthur Ransome Group on Facebook.

The whole series of books clearly have a worldwide following popular from one generation to another. ‘I don’t find this surprising. I got my first Arthur Ransome book (Swallowdale) as a present, in 1948. At the time it was a copper-bottomed dead cert as a present for any child, couldn’t be criticised, known to be virtuous, and incidentally known to be good. All that is still true and has been for decades. I don’t think it could fail to be up there. Children may now prefer Star Wars, Lego books or Minecraft (my grandsons certainly do), but books are still *bought* by adults.’ Peter Ceresole

‘The book has lasting appeal, particularly for children, because there is nothing in the adventures of the Swallows and Amazons that readers feel they could not do themselves. They felt they could sail a dinghy like the Swallows. I know, because when adults came aboard Ransome’s restored boat Nancy Blackett in recent years, many had tears in their eyes and said: ‘I learned to sail from the books; and Arthur Ransome was the biggest influence on my life.’ The story is not like so many others an unachievable fantasy. This must stem in part from the fact that the characters are based on real children and on Ransome’s observation of those real children. The quality of the plotting is superb. Ransome was utterly clear about the stories he wrote, sometime writing chapters in the middle of the book before writing earlier ones. His prose is spare and simple and very easy to read, and bears comparison with the writing of Jonathan Swift in Gulliver’s Travels — another writer with appeal to both children and adults.’ Michael Rines Do add your own thoughts in the Comments below.

Hugh Shelley wrote, in his Bodely Head Monograph of Arthur Ransome, that it is the joy with which the story is written that makes Swallows and Amazons a great book. In many ways it is a reflection of Arthur Ransome’s own childhood holidays with his brother and sisters on Coniston Water. And even today, children can discover the places mentioned for themselves. Holly, aged six, wrote to me recently saying, ‘My Mummy and Daddy took me to Wild Cat Island. It was my favorite day… When I am bigger I want to be like Titty.’

While ‘nearly all enduring books do so because of the writing,’ as another reader commented, children enjoy the camaraderie and the action that have been captured in these semi-abstract oils.

Some of these paintings have already sold, some are available from the Lawson Gallery in Cambridge, some from Gallery Rouge in St Albans, at Highgate Contemporary Art, the Aubrey Gallery in Great Dunmow and direct from Fadi Mikhail, the artist himself. You can see more here. 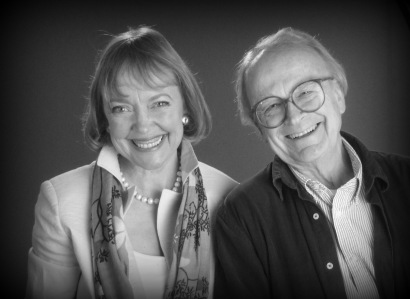 On 21st March and 28th March, the new CBBC TV show ‘Cinemaniacs’ included guest appearances from Sophie Neville and from David Wood, who wrote the screenplay for ‘Swallows & Amazons’ back in 1973.

Oli White, the vlogger and presenter of ‘Cinemaniacs’, asks a number of people involved in movies about making their first film. Others featured include Michael Sheen, Sir Ian McKellen and Matthew Lewis famous for playing Neville Longbottom in all eight Harry Potter movies.

Watch Episode 7 (from 18 mins in) on BBC i-Player by clicking here.

David Wood appears with other screen writers in Episode 8

To find out more about how the film ‘Swallows & Amazons’ (1974) was made, along with how the children’s parts were cast, please see earlier posts or read the book! It includes more than 120 photographs taken on location in the Lake District.