Roger still couldn’t swim, but he was trying to. Very hard.  The production manager had kindly scheduled the second of our swimming scenes as late in the summer as possible. The weather was warmer – we’d elected to go bathing in a river up near Rydal Water on our day off – but it was still pretty chilly out on Coniston.

Whilst we tried to acclimatise by running around in our swimming costumes the crew were all in their thick coats as you can see from this home movie footage shot by my mother. We had bought her 8mm camera by saving up Green Shield stamps. (Can you remember collecting Green Shield stamps from petrol stations? They were an icon of the early 1970s all by themselves.) I remember someone on the crew calling out ‘Second unit!’ as Mum lifted what looked like a grey and white toy to her face. It was a bit noisy so she was not able to record during a take. You only see us before and after the sequences in the film, but her footage shows quite a few of the members of the crew – all smoking away, even when they were trying to warm us up after each sequence. You can watch Jean McGill, from Cumbria, our unit nurse who was dressed in red popping Dextrose into our mouths and giving us hot drinks to warm us up. Jean made Gareth Tandy, the third assistant, who was aged about 18, wear a sun hat because he had previously suffered from sun stroke. David Blagden can be glimpsed as one of the only other men with short hair.

The camera pontoon must have been left up on Derwentwater. Claude was obliged to shoot these scenes from what we called the camera punt, which was smaller but quite useful. Richard Pilbrow sent me a picture. He has included others in a new book that he has written about his career, including a section on the making of ‘Swallows and Amazons’ called ‘A Theatre Project’

Do please let me know if you can tell me the names of the three Cumbrian boatmen featured in this photograph who helped us. Others are featured in the home-movie footage. They all look like pirates. Real ones.

Goodness knows that Health and Safety would say about that punt today. The DoP managed to get two sizeable electric lights, on stands, into a boat already overloaded with personnel and expensive equipment. You can see for yourself. Were these ‘Filler’ lights powered by portable batteries?  The Lee Electric generator was on the shore. I was in the water. Busy being a cormorant. 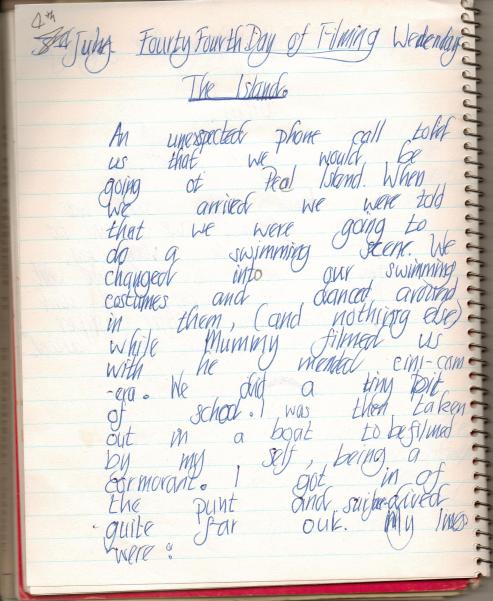 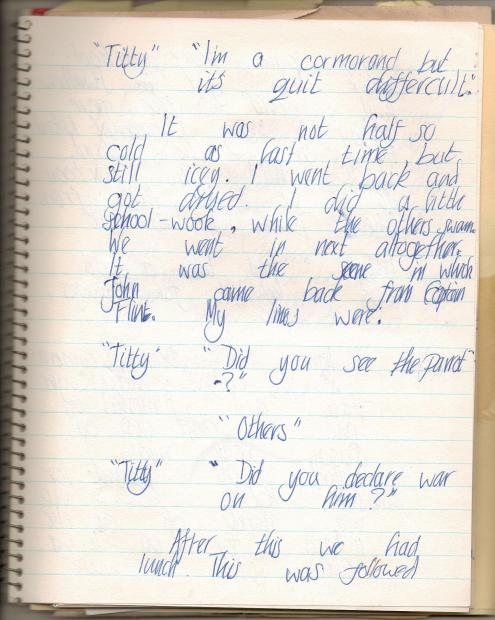 We had an interesting afternoon filming with both dinghies. At one point we had the camera with us in Swallow. I found these photographs of us on the internet.

I was given the honour of clapping the clapper-board and calling out, ‘Shot 600, Take one!’ for a close-up of Suzanna Hamilton. 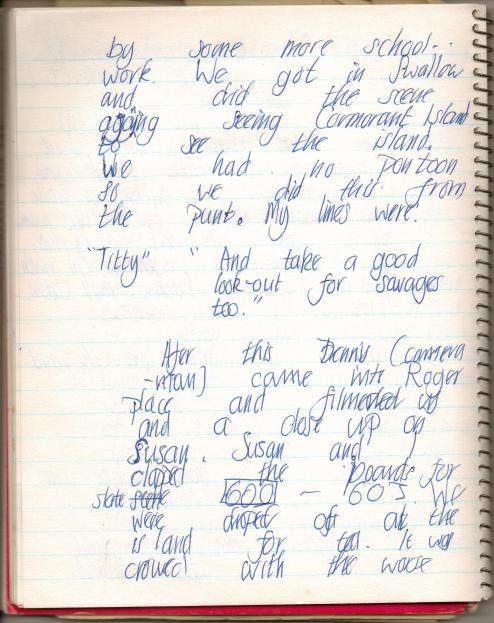 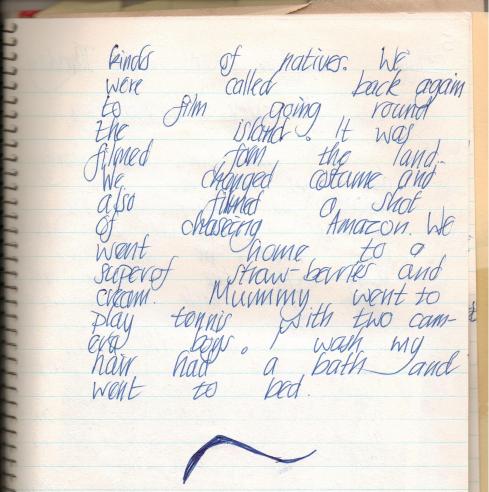 ‘The worse possible kinds of natives’… Tourists were beginning to arrive for their summer holidays in the Lake District and we still had quite a bit more to film.

You can read more about the adventures we had making the original film of Swallows and Amazons here: