Since Classic TV Press published ‘The Making of Swallows & Amazons’ in 2014, a number of facts have floated to the surface. The most amazing recollection was one that occurred to my mother.

‘The letter inviting you to come for an interview for a part in the film was addressed to your father. He was working abroad when it arrived. I never, ever opened his mail but something urged me to open that one envelope. It was a good thing I did as he was away for three weeks and we would have missed the opportunity altogether.’  She was amazed by the contents and replied at once, sending a photograph to Theatre Projects. I think it was this rather miserable one of me wearing a Laura Ashley dress.

A date was made to meet the director. I now remember that I was taken up to Long Acre in the West End to meet Claude Whatham very soon after Dad arrived back from his business trip. We walked through Soho and visited a Chinese grocery store on the way home. 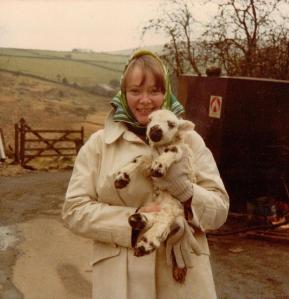 ‘I was never paid to work on the set as chaperone,’ Mum told me. ‘Neither was Jane. We were just happy that our expenses were covered but it ended up costing me quite a bit as I had to travel back to Bristol to work now and again.’ She was working for HTV as a television presenter alongside Jan Leeming, who is currently appearing on ‘The Real Marigold Hotel’. For the photo of them both on an HTV West show, please click here

Jean McGill said she didn’t get paid for acting as the Unit Nurse, as far as she could remember, ‘But I wouldn’t have missed it for the world.’

The most exciting thing was meeting Kerry Darbyshire, who played Vicky’s nurse, at Zeffirelli’s cinema in Ambleside for the 40th Anniversary screening of the film. I learnt to my horror that I had mis-spelt her name in the credits I gave the actors. All I had to go on was her signature in the back of my copy of the hardback book of ‘Swallows and Amazons’ where I’d collected autographs.

Kerry laughed, telling me, ‘I should have had more legible handwriting.’ She  appeared in the film quite a bit. ‘It was a pity I wasn’t able to bring my own child. She was the exact same age and colouring as the little girl they found to play baby Vicky.’ Kerry was with us in the compartment of the train on day one of the shoot. ‘I found it very difficult to laugh with you when the train went into the tunnel.’ I couldn’t think what she meant at first but it was the laughter that followed Virginia McKenna’s line: ‘He’d say, “Just look at that scenery”.’ at the moment the train goes into a dark tunnel. ‘You children found it no problem at all, but I couldn’t laugh. I was too shy.’ Zeffirelli’s are next screening ‘Swallows & Amazons’ (1974) at 7.30pm on 2nd March.

I never knew the name of the snake wrangler – who brought the charcoal burners’ adder along, but Ken Foster wrote in recently to say it was his father, John Foster whose family farmed near Satterthwaite. He was once employed as an assistant at the fresh-water biology research establishment at Windermere and became a biological specimen supplier. You can read more about his unusual occupation here

To read more about the day the adder arrived on location, please click here.

Simon West, who played Captain John, remembered that Claude Whatham often used to take us for a quick run before going for a take. It freshened us up and was appropriate when we had to run into shot, slightly out of breath.

One little girl wrote to tell me how she pulls her dress over her knees just as I did when I played Titty, as I got rather cold in a scene when were were first sailing Swallow to the island.

George Marshall, the veteran film accountant, assured me we had a very talented film crew. Mark Birmingham, a film producer currently working on the bio-pic of Noel Coward, knew quite a few of the individuals working on ‘Swallows & Amazons’ and told me of the amazing careers they went on to lead. ‘Your Best Boy, Denis Carrigan, went on to run Sherperton Studios.’ Denis worked closely with Ridley Scott who made many great films there. ‘Sadly one of the other electricians died when he grabbed a live cable.’

Other people have written with interesting stories relating to the film locations.

‘The shop in Woodland Road was my grandfather Tom Kirkbride’s cobblers shop from 1930s to 1956,’ Brian Salisbury wrote. ‘After he retired, the wooden building became Stan Cropper’s sweet shop doing a roaring trade with the boys at St Mary’s Boys School just along the road and the newly built Droomer Estate.’  This was the shop where we bought rope for the Light House Tree that is now a barber’s in Windermere. To read more about this location and others in Windermere, please click here

Have you received the same despatches as me?

I opened my post to find not one but three reviews of my books, including this article published in The Outlaw and another in Signals, for which I am very grateful. I have pasted them here for fans of the film who do not yet subscribe to these literary magazines.

This review was followed by by a comment from Winifred Wilson, librarian of The Arthur Ransome Society:

The Library Supplement in The magazine of The Arthur Ransome Society gives a full description of all three books: 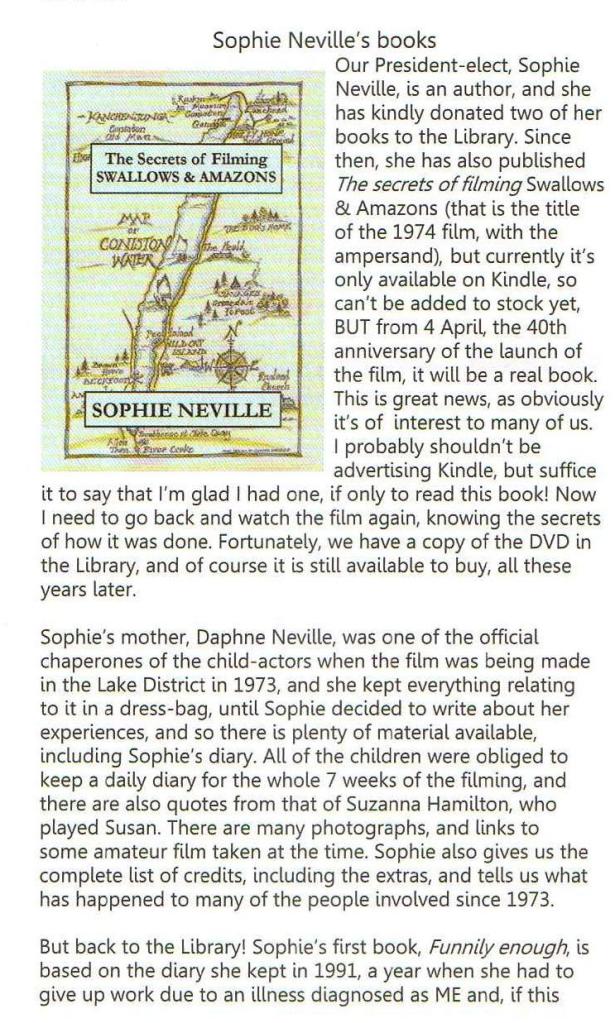 Mixed Moss  arrived before Easter with Spurrier’s map on the cover:

I found another review inside, this time from New Zealand: 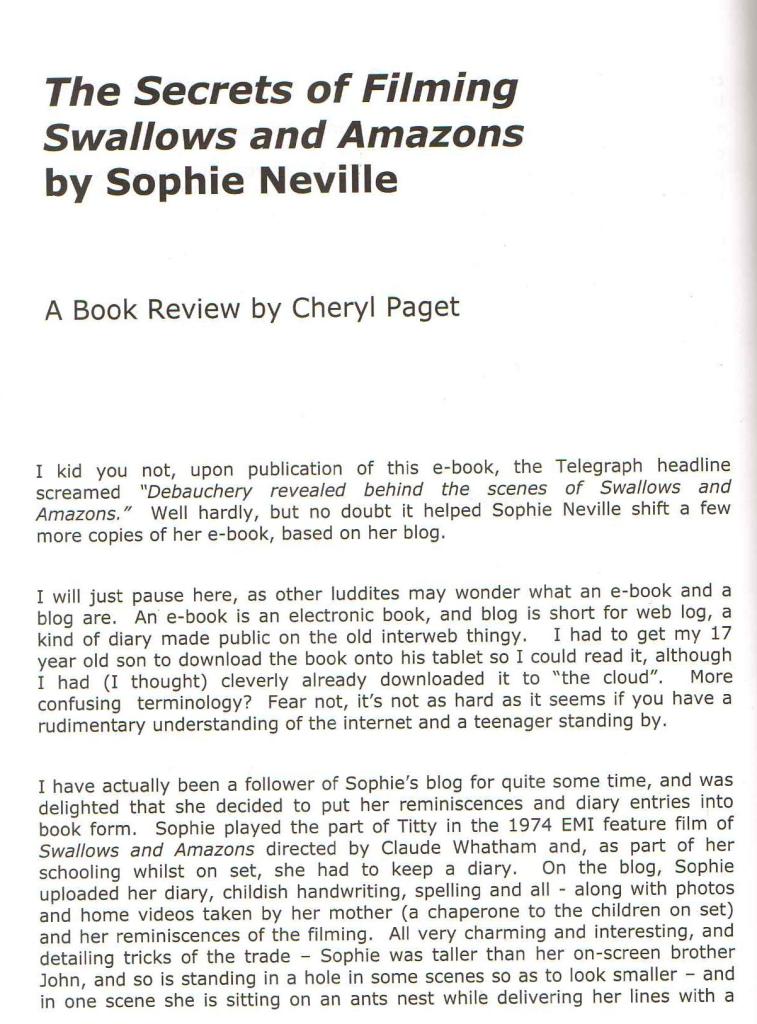 The News is that The Secrets of Filming Swallows & Amazons has been signed up by the publisher Classic TV Press who plan to bring out a new edition in paperback this July. It will include glossy photographs and additional points of interest. If you would like to order a signed copy please email: classictvpress@live.co.uk

Here is a shot from 1973, capturing some of the deb-archery:

Sophie Neville with Peter Robb-King (Make-Up) and Ronnie Cogan (Hair) watching Lesley Bennett and Kit Seymour trying out their bows and arrows with Terry Smith (Wardrobe) while on location near Peel Island on Coniston Water in the Lake District.