‘Let’s just run though our lines, shall we?’ Old Jack Woolgar said, in a gentle Cumbrian accent. We were waiting about for some reason, so did just that, sitting by a wood stack.  Titty had a lot to say in the scene where we went to see the charcoal burners, but the dialogue was straight out of Arthur Ransome’s book so I it was easy. Or I thought so, until there was Old Billy saying – ‘Ehh, then you’ll be climbing into that mini-bus and off back to Ambleside, I expect.’

I thought, ‘That’s not in Swallows and Amazons! That’s real life.’

‘Eee, lass! You forgot to come in on your cue.’ I had too. I was so entranced by Old Billy, so lulled by the music of his voice, that I had simply gone on listening to him.

We were still having problems with the weather. It was grey at first but grew to be a bright sunny day in Cumbria, cold with a gale blowing that was knocking the tops of the trees about and making life hard for Graham Ford, the Sound Recordist. This was all a bit difficult as it was meant to be dead calm. ‘It’s blowing up a bit,’ Old Billy put in. I don’t think anyone watching would have noticed if we’d left it at that but our hair was blowing about so madly that Young Billy had a few savage-like words with John about why we weren’t sailing. These are not in the book.

I think Mum did well with her photographs. She only had a small camera but she tried to capture what it was like to be on set, involved in the filming, rather than just focusing on the story. Because her camera made a clicking noise she was only really able to take shots when we were in rehearsal, wearing our Harry Potter-like nylon tracksuit tops, me in a sun-hat, the rest of the crew wrapped up in their warm jackets.

When I watch this scene I notice one technical bit about acting that is never talked about much. You have to hit your mark. Without this being obvious. No looking down. Your mark is the exact position established when the shot is lined up.  The camera focus, certainly back then, required actors to be consistent and hit the same position in each take as established in the rehearsal. Look at the opening shot at the top of this post and you can see it is carefully composed – a nice triangle, with all our faces in vision. The important bit – Roger holding my hand is not masked. Do I spoil the magic if I say we are standing on our marks?

If feet can’t be seen a piece of tape was usually placed on the floor in front of the actors’ toes to provide an mark. I used to use different coloured tape for different artistes later on when I was an assistant director. We used chalk on tarmac roads. Tape didn’t stick to most of the locations on Swallows and Amazons  so we used sticks or tree bark, taking quite a pride in disguising  them. Sometimes a box would be placed on the ground so we could feel it and not have to look down. This could not be done at the charcoal burners’. We all came out of their dark wigwam blinking in the bright sunlight shuffling onto our secret marks, Suzanna glancing down quickly to check she was on her’s. 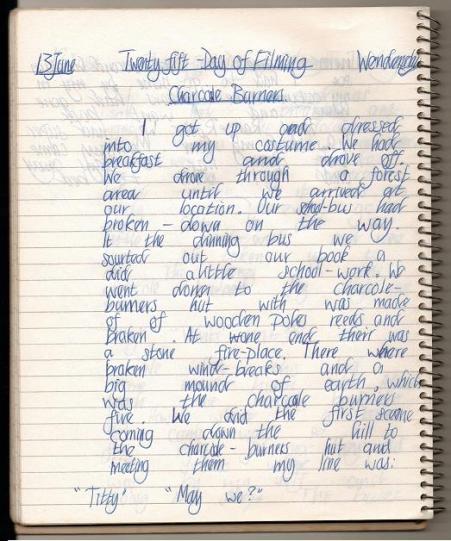 Was the charcoal heap was a real one? I’m afraid I think, since that hole had to start smoking on cue, that it was constructed for us with a prop man called Terry inside with a smoke gun. I know he suffered rather from getting too much smoke in his eyes and had to be treated by the nurse. There was certainly a great deal of smoke around, which had a wonderful effect.

We could all see the adder but the Sound Recordist wanted to hear her so he buried one at our feet. She was a lovely serpent.  Suzanna, who loves snakes with a passion, got close to touching it. She was very disappointed that you can’t see this in the movie. I was a bit scared. Ransome had added that frisson of danger – real life danger – there for us to see.

Jean Woodhouse wrote to say that, ‘I came to watch Swallows and Amazons being filmed. It was the charcoal burner’s scene. We walked down from our village Primary School (Satterthwaite) but the scene was actually just down the road from where I lived… we were all terrified re-the snake.’ She was about 10 years-old at the time. ‘…because I used to go up and down through the wood each day, I knew the real charcoal burners who worked in there and so that scene in the film has always felt quite special to me.’

One of the most magical things for my mother was meeting the real charcoal burners. They looked exactly like the actors playing the Billies. I will include their photographs in the next posting, as we returned the following day to record the scene inside the wigwam.