Forty years ago today we were filming with Virginia McKenna at the location used for Arthur Ransome’s Holly Howe above Coniston Water. It was a day of days – the sunshiny day that we had all be waiting for.

The buttercups and daisies were still out in the field that flows from Holly Howe to the lake. Roger was able to tack up the meadow to receive the despatches from Mrs Walker, described in the opening pages of Arthur Ransome’s book.

‘…Each crossing of the field brought him nearer to the farm. The wind was against him, and he was tacking up against it to the farm, where at the gate his patient mother was awaiting him.’

I don’t think you can tell that this section of the scene was recorded seven whole days later than the sequence that runs directly on from this when the Boy Roger delivers the very same ‘If not duffers’ telegram to Captain John. The hole that had been dug for the camera alongside our picnic had been filled in. You can see this from Mother’s perspective when I was milling about near the lake looking towards the island I couldn’t actually see.

Poor Sten, he had to run up the field on what proved to be our hottest day. I remember Jean McGill, the Unit Nurse ministering cool drinks and a flannel soaked in cool eau de Cologne to make sure he did not get dehydrated. We all wanted a go with the cool cloth on the back of our necks at lunch time.

It was good to escape the heat by getting out on the water. We shot the scene set on the old stone jetty at the boat houses below the farm when Titty leads ‘Good Queen Bess’ down to the harbour to inspect her ship. I didn’t realise she had a large box of matches in her hand. Virginia kept it a surprise from us in real life. I was excited to find out that Simon Holland, the Designer had painted the branded cover by hand.

As the Call Sheet specifies, our dinghy Swallow had been loaded with all the tents and camping equipment that had been on Peel Island the day before. I didn’t realise at the time quite how often the design team had struck camp and made it up again. I just sat on top of the equipment singing Adieu and Farewell, not very well, as we sailed out onto Coniston Water, waving goodbye to our Fair Spanish Ladies.

I am sure that we had already recorded the scene in David Wood’s screenplay when the Walker family arrive at Holly Howe, but Claude decided to take advantage of the golden light and shoot it again.  I am sure this was a good decision. It had been a long day and we were tired but the excitement of our arrival is tangible.

My mother thought that Mrs and Mrs Jackson, Mrs Walker’s nurse and Vicky the ship’s baby, who are listed as Extras on the Call Sheet, were particularly well cast. It must have been a long day for them. It was a long hot day for all of us, but a happy day.

The girls who had been taken on as our Stand-in’s the day before did not seem to be around to help limit the hours we spent on set, but perhaps I am muddled. They may have only materialized on Peel Island at a later date.

What I really did not know, until I watched the documentary broadcast last Sunday, was that Mrs Batty, who held the lease on Bank Ground Farm, had locked out the crew. She explained that when she was originally asked if we could film on her property she did not quite realise the scale of operations and only asked for – or accepted – a location fee of £75. The arrival of the two red double-decker buses, the Lee Electric van, the generator and other lorries, not to mention the Make-up caravan rather daunted her, as did the furniture moving activities involved at the start of the filming when we shot the interior scenes. She said that she decided that £75 was not enough, padlocked her front gate and wouldn’t let them back in until they agreed to pay her £1,000. It was a lot of money, more than double the fee I received.

You may have seen the BBC documentary about the making of Swallows and Amazons, when Ben Fogle interviewed Suzanna Hamilton and myself at Bank Ground Farm for ‘Big Screen Britain’. This was  re-packaged last year on a programme called Country Tracks. My father’s 16mm footage had been skilfully inter-cut with an interview with our Director, Claude Whatham. I did not know that it was being broadcast but was able to watch on-line. 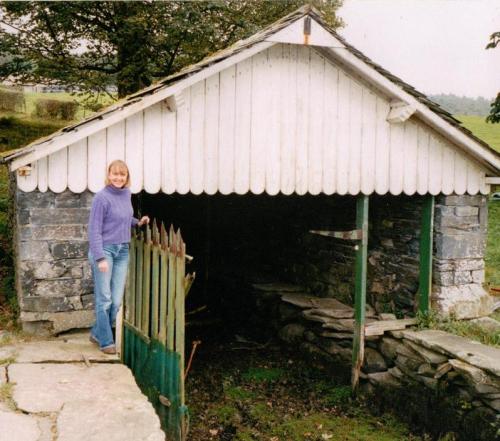 The Making of SWALLOWS and AMAZONS (1974)

Ride the Wings of Morning

There was an error retrieving images from Instagram. An attempt will be remade in a few minutes.