Something very exciting happened last week. Suzanna Hamilton came to see me, bringing the photographs that she was given during the filming of Swallows and Amazons along with a bundle of papers. I immediately recognised the blue bound diary that she had kept.  Her God-given sense of humour fills the pages.

Although Titty was the one who always kept the ship’s log in Arthur Ransome’s stories, we children all kept journals during the filming as part of our school work. It was quite a task. 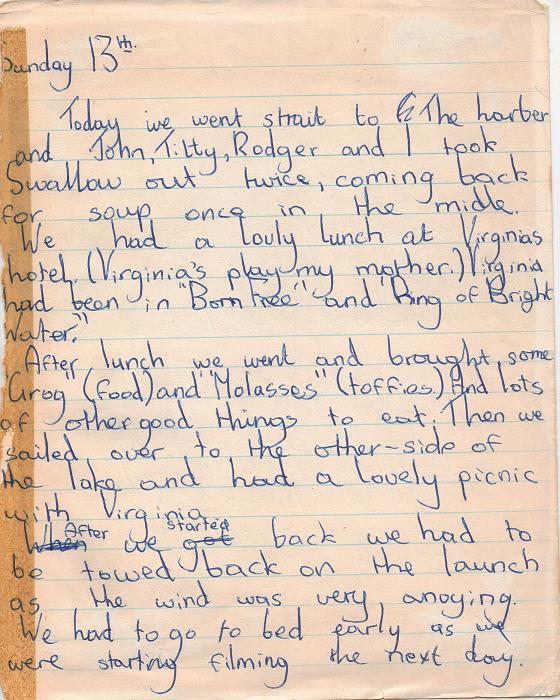 Suzanna’s diary gives the story of making the film of Swallows and Amazons from the perspective of an actress, the actress she was then and ever more will be. Even before we began filming she was  getting as excited as Susan about grog and molasses, calling us by our charcter names as Claude Whatham suggested.

Anna Scher ran the most wonderful children’s theatre club in Islington, which Zanna went to after school, along with Pauline Quirke and Linda Robson. I visited Anna Scher’s Theatre Club ten years later when I was casting children for the BBC drama serial of ‘Coot Club’ and ‘The Big Six’. Although I didn’t find anyone there who could sail I held Anna Scher in huge admiration and respect, using her exercises when I was auditioning kids in Norfolk. She did so much for the young people of east London, giving children confidence with self-discipline aquired during their drama lessons and workshops.

David Wood, who wrote the screenplay of Swallows and Amazons, was already well known as an actor. Mum was rather in awe of him since he had played Johnny in Z Cars and had starred the feature film ‘If…’   alongside Malcolm McDowell. He had been a storyteller on the BBC Childrens Television programme we all adored called Jackanory.  Suzanna had been involved in the same series when E.Nesbit’s ‘The Treasure Seekers’ had been read.  She had also appeared in ‘The Edwardians’  form the book by E.Nesbit directed by James Cellan Jones in 1972. By coincidence Pauline Quirke played Eliza in ‘The Story of the Treasure Seekers’ in 1982 and I worked with her a few years later on Rockliffe’s Babies. My mother appeared in a pantomine David Wood wrote called The Gingerbread Man when it was produced at The Everyman Theatre in Cheltenham. She wore red with a pill-box hat as Miss Ginger.

You can read more in the ebook ‘The Secrets of Filming Swallows and Amazons (1974) available from Amazon Kindle and all ebook retailers.