‘When you went to see the charcoal burners, did Susan really leave her basket behind?’

‘Yes, she did!’  I’d totally forgotten, but she left it behind by mistake.

I was invited to speak after dinner at the 11th Arthur Ransome Society Literary Weekend held at Willis Hall, Bristol University. It was a joy and delight to meet the organisers and delegates, of which there were about 150. All seemed interested in learning more about the making of Swallows and Amazons, the feature film of Arthur Ransome’s book produced  in 1973 by Richard Pilbrow of Theatre Projects and distributed by EMI in 1974. 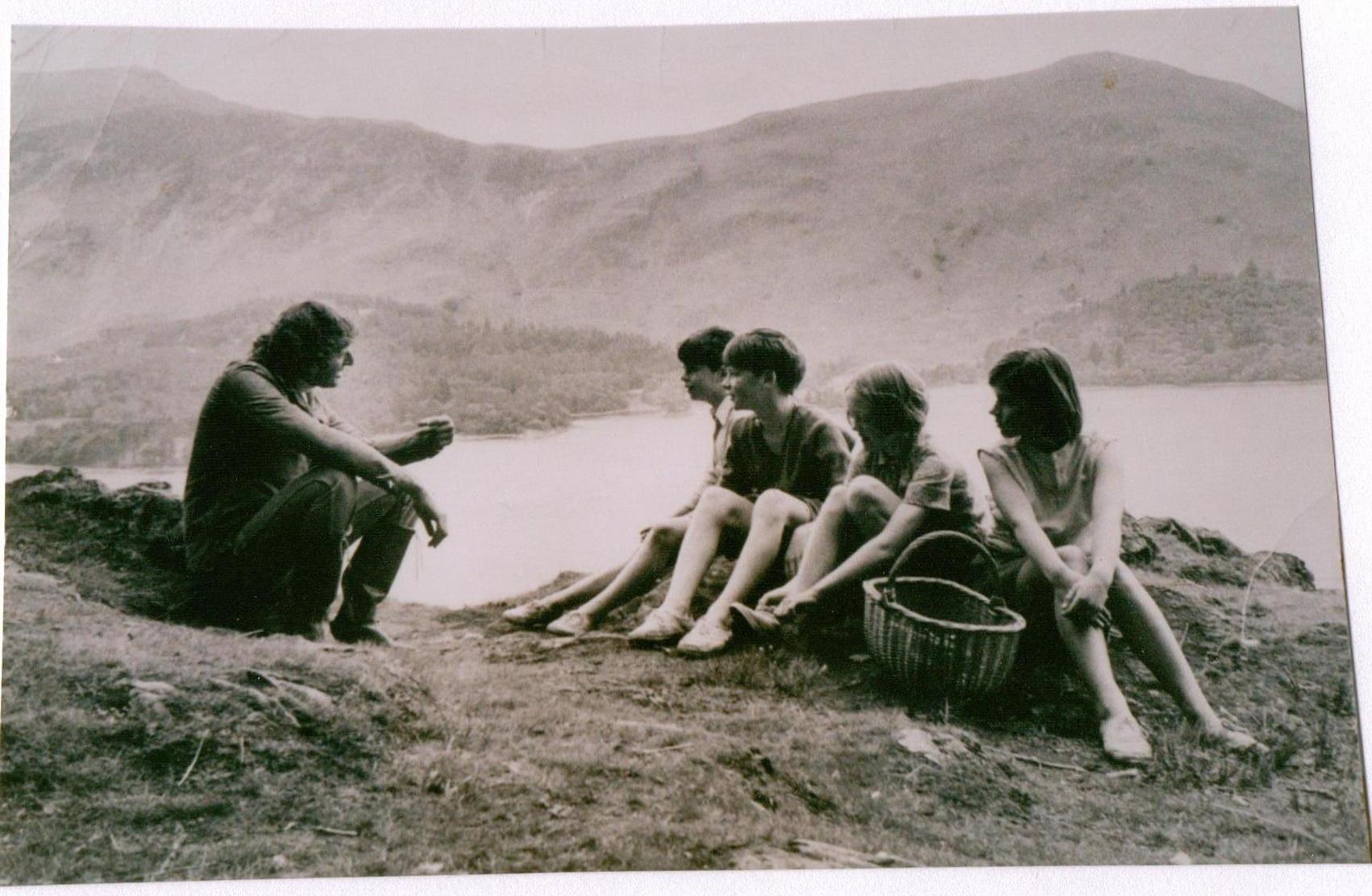 Director Claude Whatham with his cast of Swallows and their basket

‘Ahh, that is rather a secret,’ I had to admit. When the filming began I was twelve, yet playing the part of Titty who was meant to be only nine. I managed to pretend to be much younger but the reality was that, although skinny, I was a tall child with long legs, so tall that in some shots you can see that I am taller than my elder brother John.  Claude Whatham, the director, seemed unconcerned but had either holes dug for me or a box produced for John to stand on when were side by side. At other times he simply had John in a higher position.

John was played by Simon West, who even aged eleven was a true leader and excellent sailor. He became a National Optimist champion in 1975. Suzanna Hamilton, who played my elder sister Susan, was aged twelve. Lesley Bennett, who played Peggy was actually the eldest aged thirteen, and Kit Seymour turned thirteen during the filming. But, unlike at school, it didn’t seemed to matter to us. We all felt the same age and got on well as a result. Sten Grendon, who played the seven-year-old Roger was actually aged nine. He couldn’t swim well, but somehow survived. 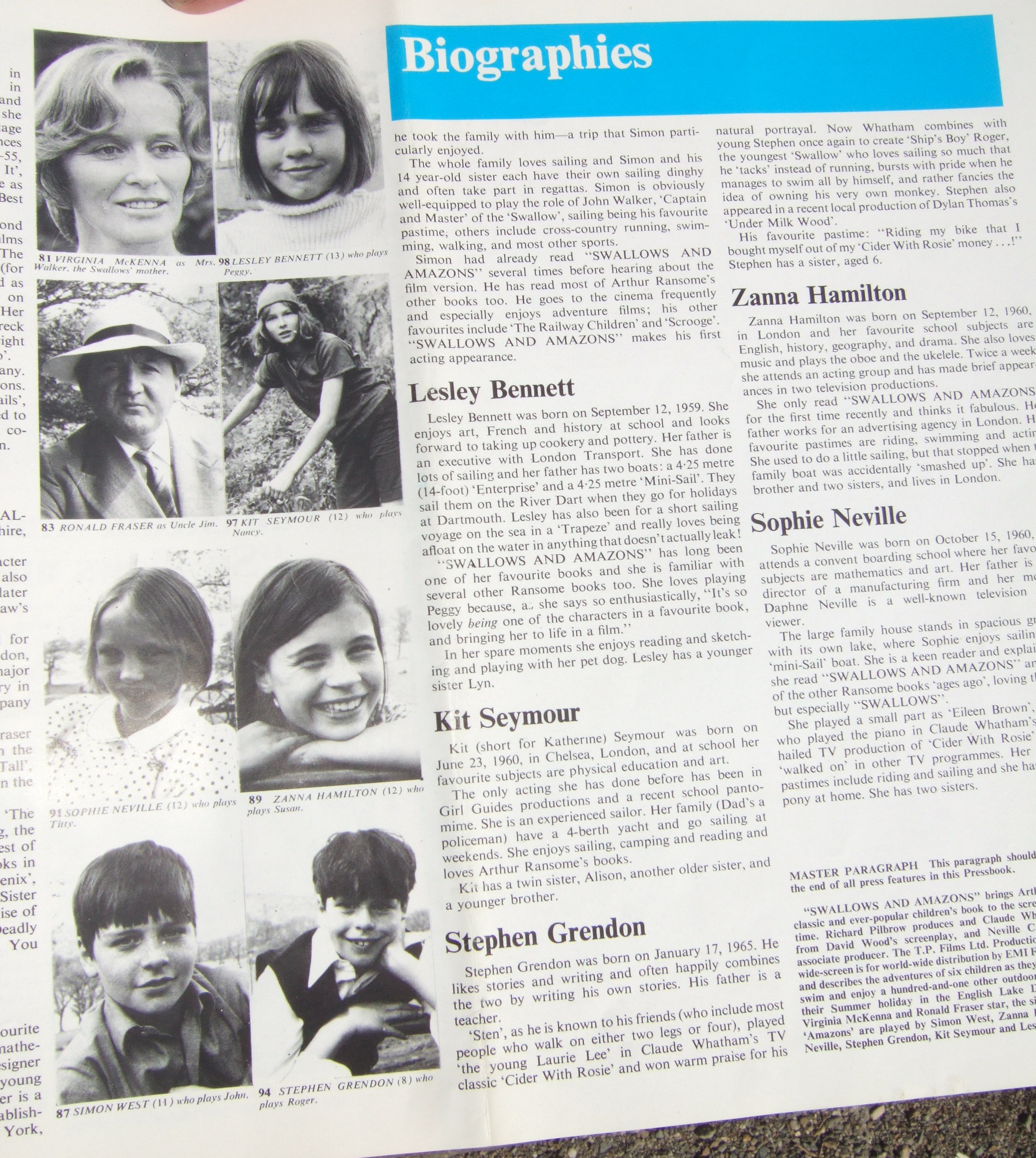 I do remember that Roger received more danger money than any of us. Claude would compensate us for getting scratched by brambles – as poor Roger was – by handing out extra pocket money. I think we earned £2 each for enduring the icy waters of Coniston when the swimming scene was shot on a grey day in May. The water was so cold that it was agony and the money hard earned.  Titty, who was keen on imitating cormorants, had to dive underwater. I nearly passed out.  I am not very good at being wet and cold or when it comes to heights either, so it was encouraging to be rewarded after climbing trees, ‘For fear of ravenous beats.’

When you watch the film you can see that Susan inadvertently burnt Roger with the large flat frying pan, which she’d just taken off the camp fire. He flinches and she muttered ‘Sorry’, before ploughing on with the scene. The moment was captured in the film.

One problem encountered when filming with children is that they can unexpectedly lose their milk teeth. I did. People still comment on this today.  I lost an eye tooth.  In some scenes it is there, then it will suddenly vanish only to re-appear again.

Claude was not very pleased that his continuity was blown and there was definitely no tooth fairy. He wasn’t very pleased when I grazed my leg falling off a swing at lunch time either. Suzanna cut her hand whittling wood. Bobby, the Props man seemed so happy and absorbed making bows and arrows for the Amazons, out of local hazel saplings, that we all wanted to try for ourselves and started carving. I bought a penknife with my danger money and made a bow, which I still have today. This occupation kept us all quiet until of course Suzanna nearly chopped a finger off and ended up with such a big bandage that Claude howled with dismay. We were banned from whittling after that, but I did learn to shoot with the bow and arrow. This proved providential since I gained the part of an archery champion in the next feature film I appeared in. Years later I met the man who became my husband at an archery event. He was chairman of the society. I might never have met him if I hadn’t learnt to shoot for the feature films. 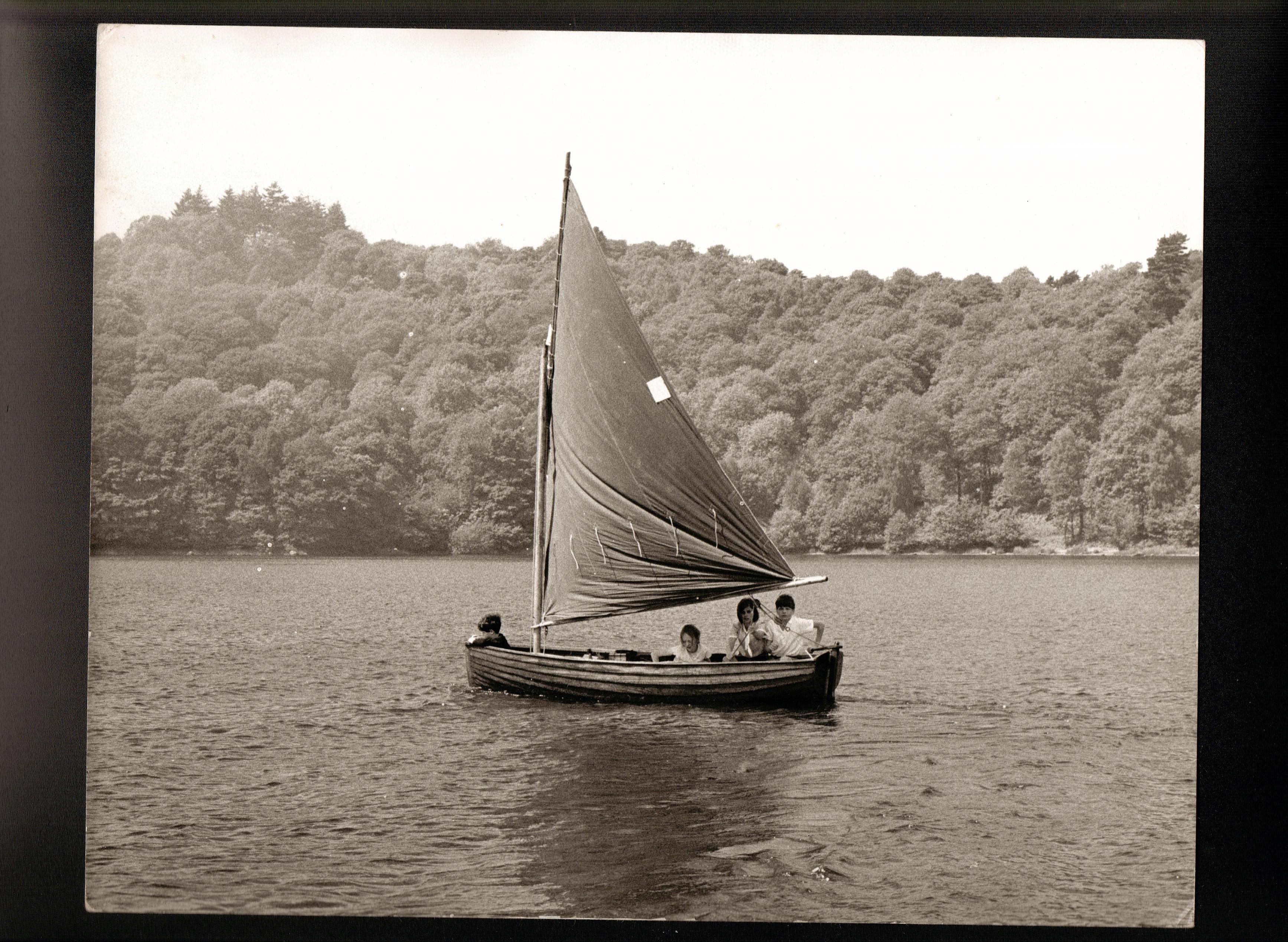 ‘Here we are, intrepid explorers, making the first ever voyage into uncharted waters. What mysteries will they hold for us?  What dark secrets shall be revealed?’ Titty uttered dramatically as she looked out towards Wildcat Island. In fact we weren’t that intrepid. Our dinghy was wired to a pontoon on which was a 35mm Panasonic camera, a few yards of track and an entire film crew: sound, camera, lighting, wardrobe g et al.

The little bit of extra money Claude gave us was indeed compensation for encountering grave danger on one occasion. I don’t remember there being anything about it in Arthur Ransome’s book, but in the film there is a sequence when the Swallows nearly collide with the Tern, an elegant steamer that has taken tourists up and down Windermere since 1891. There is rather a large difference between the shot of the dinghy with the Tern coming towards her when Susan calls, ‘Look John! Steamer ahead!’  which was shot when Swallow was attached to the floating pontoon, and the next shot, a top shot, which was taken from the steamer when we were sailing free. 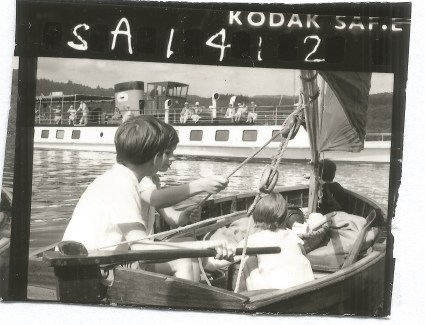 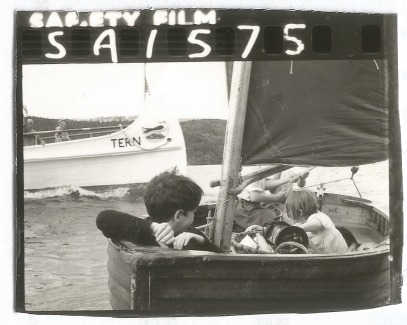 That is when things went wrong. The Tern turned, John lost his wind in the lee of the larger vessel and we four children came perilously close to ending up in a very Duffer-ish state.  Swallow had no centre board, only a keel and a shallow rudder, so she was difficult to turn at the best of times. We were acutely aware that Roger couldn’t swim, we had no buoyancy and I was perched on a pile of heavy old camping equipment. My father, who is a good dinghy sailor with years of experience racing in the Solent, was watching from the deck of the steamer, helpless. He could foresee the problem and yet was able to do nothing. Although we just managed to avoid a true collision he was so shaken someone had to find him a glass of whisky. 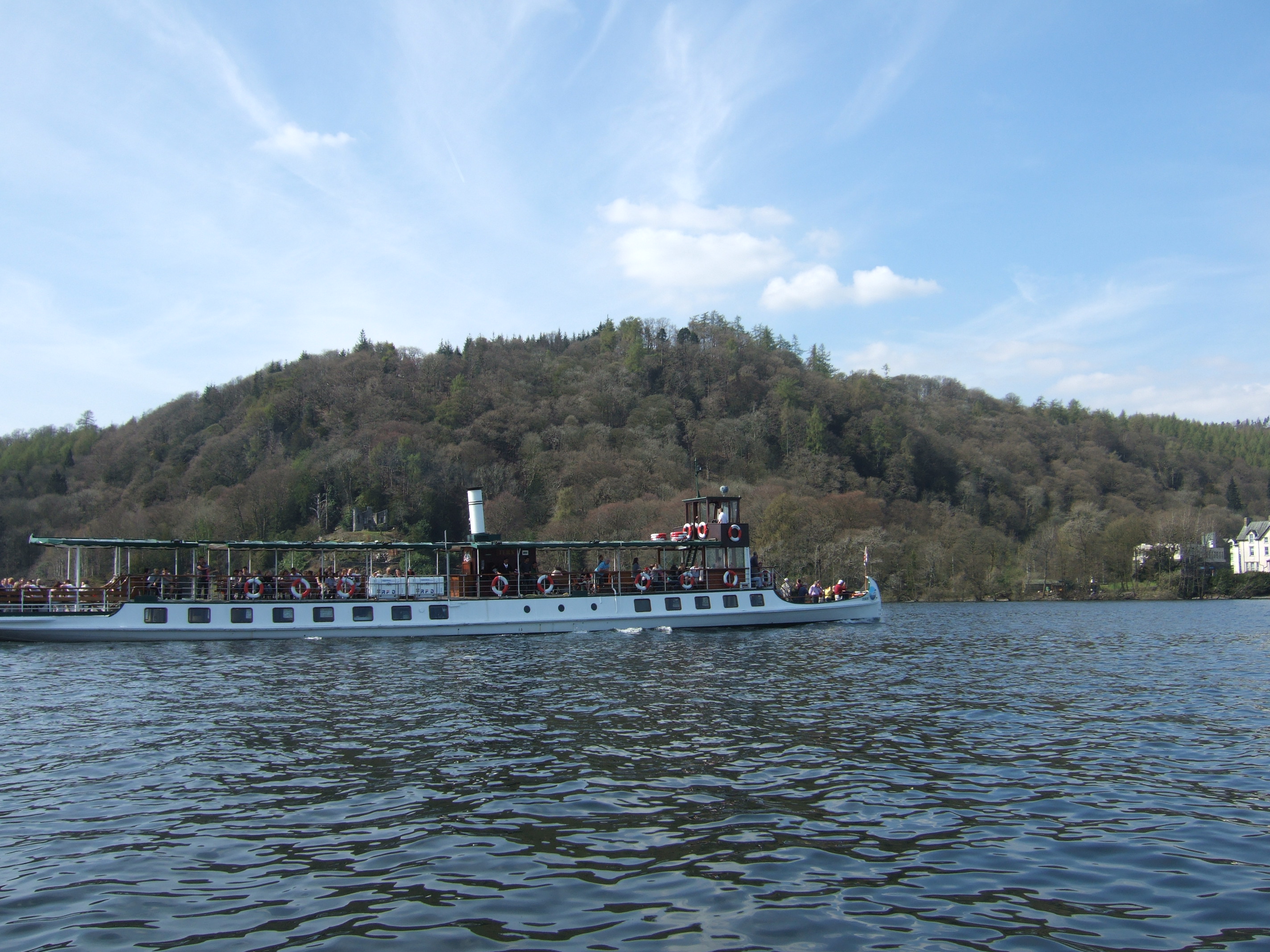 You can read more about the making of ‘Swallows and Amazons’ (1974) here:

4 thoughts on “Secret Waters ~ or Swallows and Amazons Forever!”