It is with some bemusement that I see myself described as a child star in newspapers. I only appeared in two feature films before I grew too tall to do more. It was the little girl here seen eating ice-cream in a pink dress, appearing as a film extra in Swallows & Amazons, who became a brighter starlet than I.

My sister Tamzin enchanted directors who cast her in one role after another. Her career started in 1972 when she was given the lead role of Elka in an episode of Arthur of the Britons opposite Oliver Tobias who played King Arthur. He later introduced her as his co-star. By this time he was known as The Stud, having starred opposite Joan Collins in the movie of her sister Jackie Collins’ racy novel.

No one asked Tamzin if she could ride a horse. It was a good thing that she was proficient as she was soon cantering up and down hills whilst clutching that medieval  doll.

Arthur of the Britons had the most prestigious cast: Brian Blessed, Martin Jarvis, Tom Baker, Catherine Schell, Iain Cuthbertson, Peter Firth, Heather Wright, Michael Gambon and Peter Bowles all appeared in the drama series, some of which was filmed on our parents’ farm. I remember Jack Watson leaping down the bank above our house. Tamzin played most of her scenes opposite  Michael Gothard, who became famous for playing the villain Locque  in the James Bond movie For Your Eyes Only. 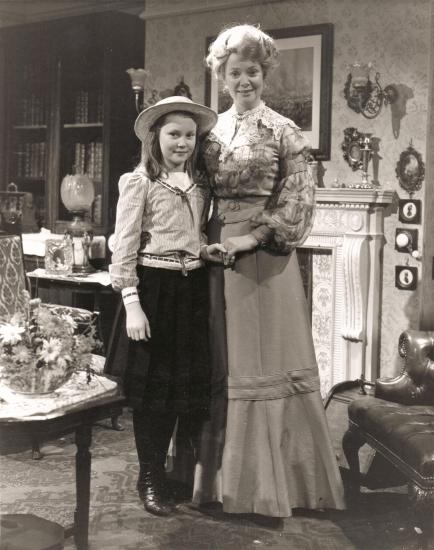 Tamzin was then cast as Anthea in the 1976 BBC adaptation of of E Nesbit’s classic story The Phoenix and the Carpet. I’ve just read that it was a story much admired by Arthur Ransome. 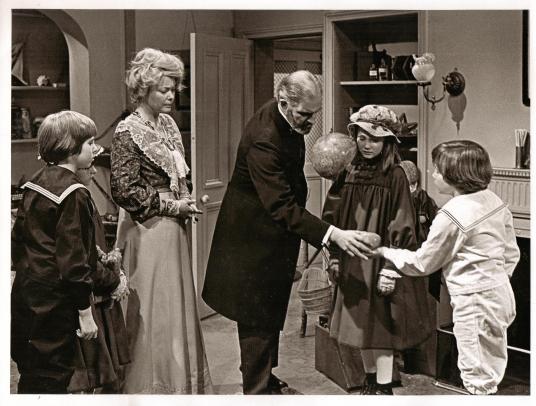 While Mum enjoyed playing the part of Mother, Tamzin’s brother Cyril was played by Gary Russell, who after appearing as Dick in the BBC series of Enid Blyton’s The Famous Five,  grew up to become a writer and script editor on Doctor Who. I last saw him at a book launch at the Imperial War Museum.

As she was used to appearing on television, Tamzin wrote in to Blue Peter and soon appeared on the show. She was also featured on Animal Magic and a number of other magazine programmes.

Tamzin soon had another lead role, that of the young Linda in the ITV production of Nancy Mitford’s semi-autobiographical novel Love in a Cold Climate. While Judi Dench and Michael Aldridge starred as her parents, her brother Matt was played by Max Harris who had the role of her brother Robert in The Phoenix and the Carpet. Tamzin can been seen on the trailer wearing a red dressing-gown in the Hons’ cupboard, looking dreamy in a tam o’shanter and jumping a white Arab over a Cotswold stone wall, whilst riding side-saddle.

She went on to take leading roles in episodes of A Play for Today, Crown Court and Screen Two. Ironically she was expelled from Drama College after Mum persuaded her to work professionally one summer vacation. At that, she tossed her head and went on to occupy time more gainfully.

She won’t believe me, but Tamzin is a most amusing writer.  You can see for yourself. Her letters are  featured in Ride the Wings of Morning. 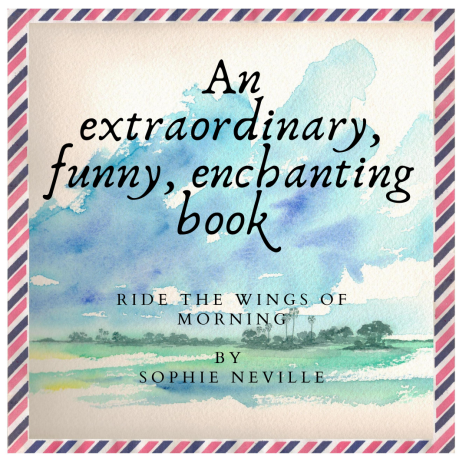 When a television drama is ready to be transmitted there is a little publicity, but not much. Photographs might be taken for the cover of the Radio Times or a book to accompany the series, there might be a Preview at BAFTA to which journalists from the colour supplements and daily newspapers are invited, but, because the programme can be advertised on air, the actors are not intensively involved in the promotion. A feature film is very different.

Whilst we didn’t mind our photographs being taken while we were acting, and were fine about Mum clicking away with her little instamatic, we all hated having promotional photographs taken for ‘Swallows and Amazons’. They were usually so posed, set up by strangers who had no idea of the story. Virginia McKenna tried to make it fun for us but this is what we all felt about this photo-call:

Why were the Amazons at Holly Howe? Why weren’t we with any of the boats? It was all terribly hot and difficult to squint into the sunshine. Only Mrs Batty’s dog seemed to be enjoying the attention.

The glare of the flash bulbs had started on day one. As Suzanna said in her diary, it made us feel ‘right twits.’ 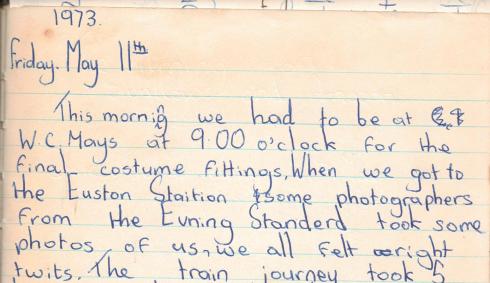 Claude Whatham was very good at explaining things to children. Looking back I wish that he had explained why the publicity was so important, but of course this was not his job and he would have been busy setting up the next shot. Certainly once the filming had finished we needed to know how important it was to promote the film. Richard Pilbrow really wanted to make a sequel, particularly an adaptation of Ransome’s twelfth book in the series – ‘Great Northern?’  He loves the Outer Hebrides and has a house on Col. I think we might have been a little keener about publicity shots if we had been told that the out-come could have been going up there for another summer. We would have been able to look forward to the possibility, but I don’t suppose he was at leave to even suggest it.

Journalists were introduced to us and looked after by our unit publicist Brian Doyle.  Brian had worked on ‘Straw Dogs’ in 1971, the thriller that starred Dustin Hoffman, Susan George and Peter Vaughan. Susan George had of course played Titty, or ‘Kitty’ in the black and white BBC adaptation of Swallows and Amazons in the early 1960s. She was now regarded as glamorous sex symbol in British cinema – setting me rather a daunting example. Much easier for Brian to publicise her then me. She had a gorgeous figure with beautiful, thick, blonde, hair. I had what my sister still calls ‘tendrils’ and my mother calls ‘bits’. And was skinny with crooked teeth.

Brian was a lovely man. He had an amazing career, going on to work on films such as Ken Russell’s Valentino with Rudolf Nureyev and Leslie Caron, The Wild Geese, Alien, Educating Rita starring Michael Caine and Julie Walters and the James Bond movie For Your Eyes Only – with Roger Moore in the lead role . He even has his name on the credits of one of George Lucas’ Star Wars films.

This was the profile he wrote for me: 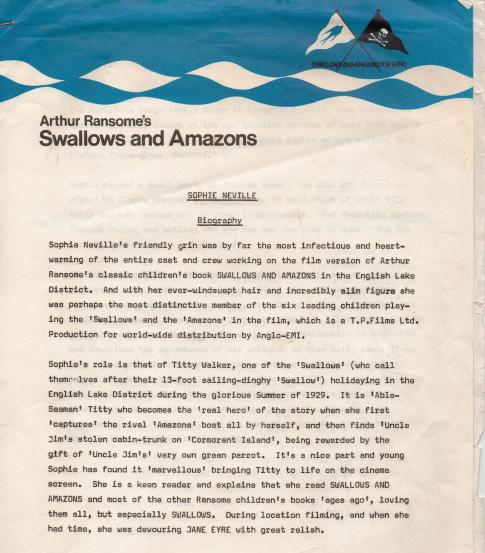 Brian adored Children’s literature. His own children came up to stay on location over their half-term and spent hours playing with my sisters, indeed they all appeared together as extras in the scenes shot at Bowness, and can be seen playing on the beach. Sadly Brian died, very suddenly, in 2008. His daughter told me that he left a collection of 35,000 books.

I still have Brian’s announcement: 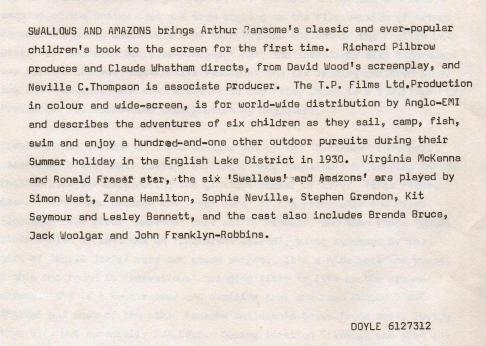 At this the journalists moved in. From all over the place!

There was a very trendy women’s magazine in the early 1970s called Over 21, which the senior girls at school used to read. My mother was thrilled to find that Celia Brayfield had written a double page feature. I was amazed. I didn’t mind the picture of us gutting fish, but started reading with trepidation.

(If you can read this, I’m afraid page one comes second.) 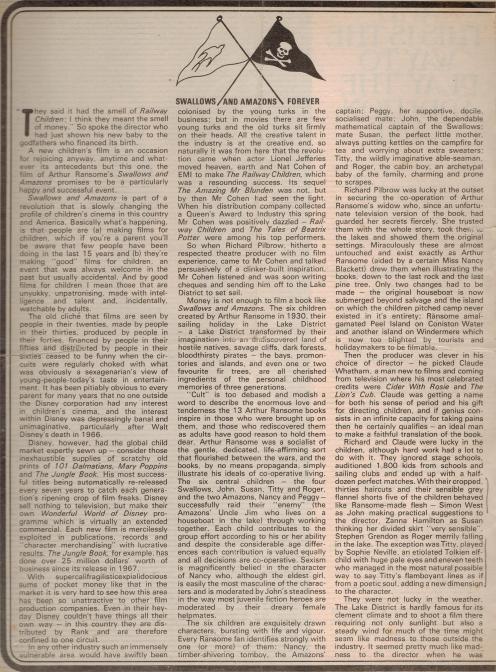 I read it, looked up the word etiolated in the dictionary and burst into tears.

Far worse was to come.