~ Behind-the-scenes in film and television, continued ~

Much of Arthur of the Britons was shot at Woodchester Mansion, a vast house built of cut stone yet left half-finished and eventually sold for £1 to Stroud District Council. My father became a Trustee of the Board that decided its future.

It was on the property below the half-finished building, that HTV constructed the vast lathe and wattle hall which comprised King Arthur’s seat.

We went to watch the filming soon after the fire scene, which opens the episode entitled ‘The Gift of Life’. My sister Tamzin was cast as Elka, the little Saxon girl who arrived with her brother Krist unexpectedly by longboat. This was spotted drifting down the river – which is in reality the lake at Woodchester. In the story Arthur insists they should be returned to their own people by Kai, portrayed by Michael Gothard, who rode some distance with them on his horse.

We were also able to watch. The episode was a beautifully shot.

‘I want to feed the squirrels,’ Tamzin declared after they had been riding for a while. It was a line few have forgotten.

‘Why couldn’t you feed the squirrels before you left?’

I was fascinated in her costume, including her shoes which were made of hessian sacking.

I am not sure whether Michael Gothard had worked with children before but he seemed able to cope. It was a good thing Tamzin could ride.  Her hessian dress was not exactly ideal riding wear.

‘I couldn’t even whistle when I had all my teeth.’

Shaun Fleming was excellent as her brother and managed to cling on behind the saddle as they charged across the hills, which can’t have been easy. The secret was that he acted under his mother’s maiden name instead of his real surname.

I appeared as the Saxon girl with blonde curly hair seen working in the fields with Heather Wright when the children returned to the Saxon village. While Heather was in lime green, I wore a gold-ish coloured top and plum skirt with no shoes. You can see me hobbling across the end of the field which was full of thistles. 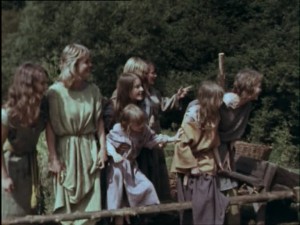 My other sister, Perry, was barefoot too. My mother, as a Saxon woman with short fair hair, (photographed above) virtually carryied her into the village after Tamzin and Shaun. 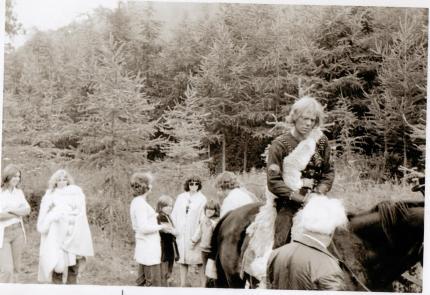 There were a number of weapons on set that intrigued us as children. We all wanted to learn how to use them. Oliver Tobias began to teach us sword fighting, however there was an accident on set which put a stop to this. One of the actors was having his boots sorted out by a wardrobe assistant when he casually swung his axe. Although it was just a blunt prop, with no edge to the blade, it went into her head, resulting in a four inch gash across her scalp. He was devastated. It was a complete accident. The wardrobe assistant recovered but it was a sobering incident and great care was taken when handling the props afterwards, even though they seemed blunt and harmless.

Forty two years later this series is still treasured by many. It had such a strong cast. Heather Wright went on to star in The Bellstone Fox with Bill Travers and Dennis Waterman and in the 1976 movie Shout at the Devil with Lee Marvin, Roger Moore and Ian Holm.

Geoffrey Adams was terribly well known at the time, as for years he’d played the part of Detective Constable Lauderdale in the long-running BBC Police series Dixon of Dock Green appearing with Jack Warner in nearly 300 episodes.

Shaun (Fleming) Dromgoole went to work in film production on a number of well known movies including American Gothic and The Woman He Loved, about which starred Anthony Andrews and Olivia de Havilland and Jane Seymour as Wallis Simpson.

The producer, Patrick Dromgoole was absolutely prolific, producing a huge number of classic television dram serials including The She Wolf of London and The Clifton House Mystery, which my mother appeared in as well as Robin of Sherwood . Her drama pupil Robert Addie played Sir Guy of Gisbourne so convincingly in that series he became hated throughout the UK.  For more photographs of Mum please see flick down though various posts on my blog for Funnily Enough.

Do please add additional information or memories in the comments below.

To read more about the story-line and see more photos, please click here.

It is fascinating to read Shaun Drongoole’s recollection of making the episode. Please click here

It is with some bemusement that I see myself described as a child star in newspapers.  I only appeared in two feature films before I grew too tall to do more. It was the little girl here seen eating ice-cream in a pink dress, when she appeared as a film extra in Swallows & Amazons, who became a much brighter starlet than I.

My sister Tamzin enchanted directors who cast her in one role after another. Her career started in 1972 when she was given the lead role of Elka in an episode of Arthur of the Britons opposite Oliver Tobias who played King Arthur. He later introduced her as his co-star. By this time he was known as The Stud, having starred opposite Joan Collins in the movie of her sister Jackie Collins’ racy novel.

No one asked Tamzin if she could ride. It was a good thing that she could as she was soon cantering up and down the hills on a massive horse, whilst clutching that medieval  doll. You can watch a bit on Youtube.

Arthur of the Britons had the most prestigious cast: Brian Blessed, Martin Jarvis, Tom Baker, Catherine Schell, Iain Cuthbertson, Peter Firth, Heather Wright, Michael Gambon and Peter Bowles all appeared in the drama series, some of which was filmed on my parents’ farm. I remember Jack Watson leaping down the bank above our house. Tamzin played most of her scenes opposite  Michael Gothard, who became famous for playing the villain Locque  in the James Bond movie For Your Eyes Only.

Tamzin was then cast as Anthea in the 1976 BBC adaptation of of E Nesbit’s classic story The Phoenix and the Carpet. I’ve just read that it was a story much admired by Arthur Ransome.

While Mum enjoyed playing the part of Mother, Tamzin’s brother Cyril was played by Gary Russell, who after appearing as Dick in the BBC series of Enid Blyton’s The Famous Five,  grew up to become a writer and script editor on Doctor Who. I last saw him at a book launch at the Imperial War Museum.

As she was used to appearing on television, Tamzin wrote in to Blue Peter and soon appeared on the show. She was also featured on Animal Magic and a number of other magazine programmes.

Tamzin soon had another lead role, that of the young Linda in the ITV production of Nancy Mitford’s semi-autobiographical novel Love in a Cold Climate. While Judi Dench and Michael Aldridge starred as her parents, her brother Matt was played by Max Harris who had the role of her brother Robert in The Phoenix and the Carpet. Tamzin can been seen on the trailer wearing a red dressing-gown in the Hons’ cupboard, looking dreamy in a tam o’shanter and jumping a white Arab over a Cotswold stone wall, whilst riding side-saddle.

She went on to take leading roles in episodes of A Play for Today, Crown Court and Screen Two. Ironically she was expelled from Drama College after Mum persuaded her to work professionally one summer vacation. At that, she tossed her head and went on to occupy time more gainfully.

She won’t believe me, but Tamzin is a most amusing writer.  You can see for yourself. Her letters are  featured in Ride the Wings of Morning.