If you take the East of the Lake road along Coniston Water you will find Bank Ground Farm. It lies between Brantwood,  John Ruskin’s former home, and Lanehead where Arthur Ransome’s friends the Collingwoods lived. Ransome was particularly good friends of Dora Collingwood, who married an Irish-Armenian doctor keen on sailing called Ernest Altounyan. They went to live in Syria but every five years or so would bring their children to visit their Grandparents for the holidays. The would stay at Bank Ground Farm next door. Ernest bought two 14 foot sailing dinghies called Swallow and Mavis in which his family learnt to sail.

It was for the five Altounyan children, Taqui, Susie, Titty , Roger – and Bridget, the ships’s baby, that Arthur Ransome wrote Swallows and Amazons after they gave him a pair of bright scarlet Turkish slippers as a birthday present.  I don’t think I knew that Titty was a real girl when I played her in the film, but I did know her character in the books and only felt rather bad that I didn’t have her thick dark hair.

Bank Ground Farm is much smarter now. Lucy Batty, who let us take over her home in 1973, is still around but the guest house is now run by her grandson Jonathan. You can either stay in the main house, where there is a lovely corner bedroom with views right down Langdale, or you can take a self catering cottage or flat, since they have been able to convert the barn and stables into further accommodation. I’ve just received post from Peter Willis of The Nancy Blackett Trust who said,

“I stayed at Bank Ground in the summer – it was utterly lovely, exactly as it ought to be – Jonathan Batty and his wife are really hospitable, and one of the great pleasures was the friendliness and interstingness of the other guests, who included a Japanese Ransome fan. Do have dinner if they’re doing it. Food’s great, but so’s the sociable atmosphere.”

It was grey and raining in the Lake District on 15th May 1973. Instead of filming the scene when Roger tacks up the field, Denis Lewiston, the Director of Photography, lit Mrs Batty’s living room at Bank Ground Farm for an evening scene. Simon Holland the Art Director dressed the room in the style of a Cumbrian farmhouse in the 192os with oil lamps, Bobby the prop man brought in all the camping gear we were to be packing, while Virginia McKenna was having her hair done up and we had lessons in our red double-decker bus. Then we recorded a scene, the dialogue of which was never used in the finished film. 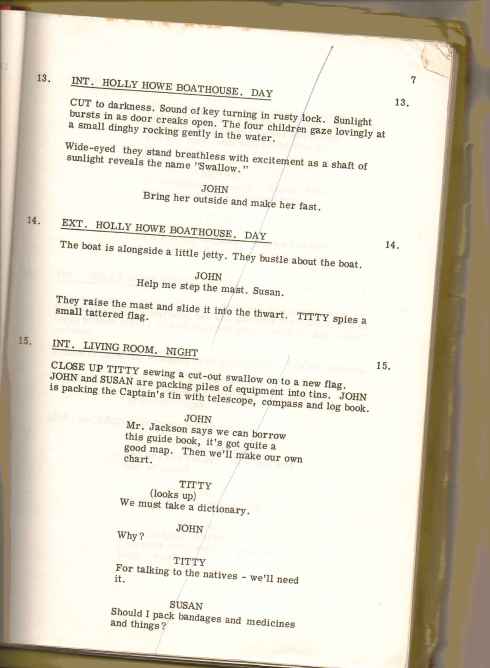 You do see Susan packing bars of soap and me making heavy weather of sewing our flag, my hair pinned back in a hideous way, with rather a modern reel of white cotton laying on the desk.  John packed the telescope in a biscuit tin, which to me now seems a mistake as we used it on the voyage, very much not in a tin, but then one always re-packs many times before an important trip.

After lunch we shot the scene when Mother is teaching us how to erect a tent on rocky ground, as she did with Father when they were young. Titty asks if she is really old.

‘Not really. But I was younger then,’ Virginia McKenna replied looking dubious.

This is rather how I feel now, all these years later, especially when I walk into a room when people are expecting me as Titty. I’m not really old, but I do look different from when I was only twelve. This always happens when I return to Bank Ground Farm. Everyone is a bit taken back by my height but say I sound just the same. And I am married now with a family of my own. It is a bit like when Peter Pan flew back to see Wendy and found she looked just like her mother – not least because in the play the adult Wendy is always played by the actress who formerly takes the role of Mrs Darling.

I was standing outside the front door of Bank Ground once, talking to Lucy Batty, when two Japanese girls arrived to stay at the farm. They were fans of the film. They looked up at me and declared, ‘Ooo Titty!’ and bowed their heads whilst clasping their hands together in greeting. They had come from the other side of the world and yet recognised me immediately. Perhaps I haven’t changed that much after all.

The weather must have cleared up a bit by teatime on 15th May as we recorded the scenes in the boat house when John discovers Swallow, brings her out to the stone jetty and steps the mast. I’m pretty sure that the sunlight comes from an arc-lamp. They must have had to take the generator down to the lakeside. Suzanna got her shorts wet as she pushed out the clinker-built dinghy but we loved being by the water.

You can rear more in ‘The Making of Swallows and Amazons’ available online and to order from bookshops and libraries.