When Sten Grendon was given the part of Roger in Swallows & Amazons (1974), his mother Jane Grendon came up to the Lake District with him to work as a chaperone, looking after all the children appearing in the movie.

Jane said that before filming began,

‘…one of the very first things we were asked was, ‘can Sten swim?”

‘I know he could doggy paddle. Neville organised swimming lessons at Pitville Pool, Cheltenham which included jumping off the diving boards.  At the time I didn’t know why and I don’t think Sten is a natural in the water and the swimming lessons didn’t prove very successful.  Claude told me – at the end of filming I think, when he gave me a copy of he original script – these lessons were because in the original script Roger was to jump in the water after Uncle Jim walked the plank.’

Jane sent me a copy of the page in question. I had not seen it before:

‘There are some personal memories.  An aunt gave  me the book for my birthday and I tried reading it but I hated all the technical boating details and I thought the children rather priggish so I didn’t enjoy it one bit and so was rather downhearted for Sten to be part of a story I hadn’t liked.’

Jane and her husband lived deep in the Cotswold countryside, at the rural Whiteway community, near Stroud in Gloucestershire. As I recollect, they had both qualified as teachers.

‘At the time of casting and during all the arrangements we had no phone at home and had to rely on a neighbour and the production team used to hold on while Ros came and fetched me!  They must have really been fed up as it must have taken 10 minutes or so sometimes for me to get to the phone!’

Jane hadn’t imagined that she would end up in costume herself, if only for a day. She looked wonderful.

‘…. so there I was – a naïve, country girl flung into this alien world of a film unit.  I was like a fish out of water!  But I think it came out in your account that I related to you children better than I did to the adults around.’

Jane’s husband Michael was able to bring Sten’s sister, their little daughter Jo, up to watch the filming over half-term.

That summer Jane appeared in costume once more when Claude Whatham asked if Sten Grendon could also appear in a commercial he was directing for Weetabix, back in Gloucestershire at harvest time. This time she found herself on location not far from her own home and was always smiling.

Jane still lives the same house. Her husband Michael has retired from teaching and they have just celebrated their 50th wedding anniversary.

When I look back on our lives as they were forty years ago I can’t help smiling. Whilst one is impacted by fashions that were too unfortunate to be revived – those collars we thought so groovy – other things haven’t changed at all. I don’t think sailing shoes or jean jackets have ever been out of circulation.

In July 1973 Claude Whatham, pictured above in his Levis, had my sisters and I in a series of three Weetabix commercials that depicted life in 1933, forty years before, when the Great British breakfast cereal was first launched on the market. There seemed to have been a wider difference between the thirties and children’s lives in the seventies than in the last forty years.  But am I right?

Whilst we had never seen stocks of corn until we went on the set especially constructed for the advertisement, Percy Baxter had made them himself back in 1933 when he lived and worked on the Cotswold hills.

The Land Rover in this behind-the-scenes shot could the same vehicle used on a film set today. 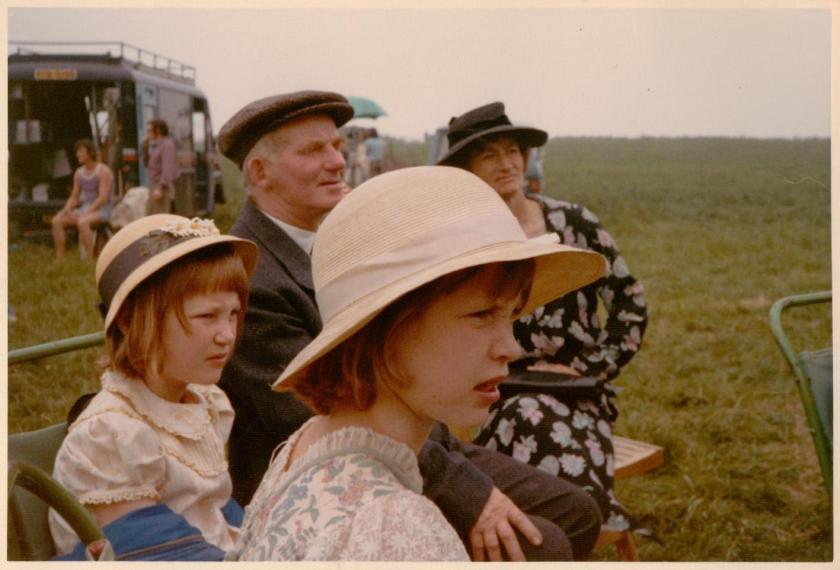 Meanwhile, my mother was presenting her afternoon television programme for HTV West called ‘Women Only’ – dressed in her Donny Osmond hat.  I would happily wear her suede coat today and can often be seen in the hat.  The lace-up boots looked good recently with a Wonder Woman fancy dress outfit but were terribly uncomfortable. My sister still hasn’t forgiven me for giving them away.

As always, well made things of quality have endured, and those faithful goods from Land Rovers to Levi jeans, Puffin Books and Weetabix are, thankfully, still being produced.

for more photographs of making the Weetabix commercial click here