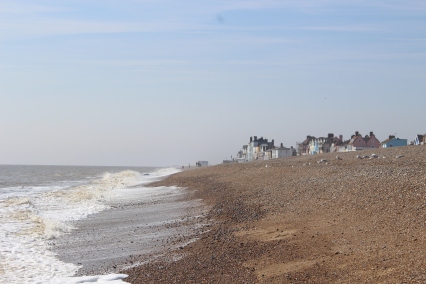 Lovely Aldeburgh on the Suffolk Coast

was shown at the Aldeburgh cinema with a Q&A afterwards with Sophie Neville who played Titty speaking to the actress Diana Quick.

Sophie was signing the last first edition copies of ‘The Making of Swallows & Amazons’. 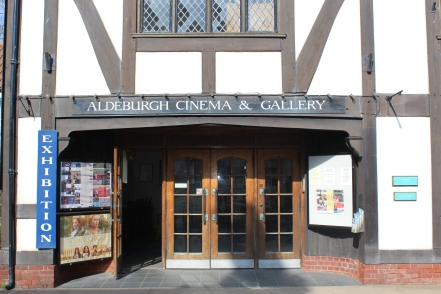 Opposite the cinema, books by Arthur Ransome, who once lived in Suffolk 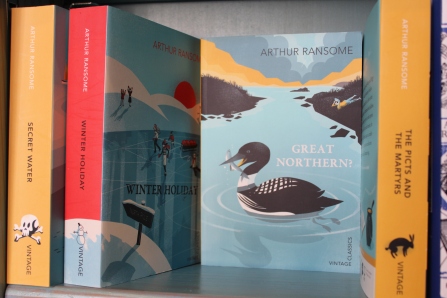 adorn the shelves of the award-wining Aldeburgh Bookshop

The sun shone and holiday makers enjoyed the beach

where you can buy fresh seafood and chat to the fisherman.

Swallow, the lugsail dingy that starred in the 1974 film

was sailing with the Aldeburgh Junior Lapwings who had a Swallows and Amazons regatta that weekend. You can read about what they got up to here. 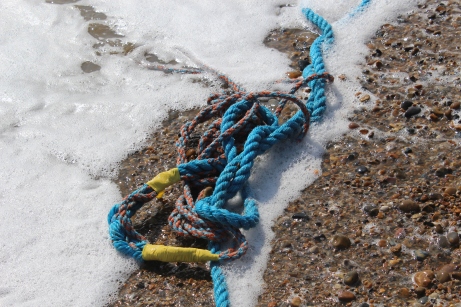 Thanks go to The Aldeburgh Bookshop for their sponsorship

May 1973 marked the 40th Anniversary of the filming of the original film ‘Swallows and Amazons'(1974). This was marked by a number of events:

Dulwich Film  screened ‘Swallows & Amazons’ (1974), produced by Richard Pilbrow and directed by Claude Whatham. The film was introduced by Sophie Neville, Suzanna Hamilton and Sten Grendon who played the Swallows. They answered questions about how it was made after the screening at the Michael Croft Theatre.

Michael Croft founded the National Youth Theatre.  One of his students was Simon Ward, who went on to star as James Herriot in the film version of ‘All Creatures Great and Small’, which Claude Whatham directed in 1974 after finishing  ‘Swallows & Amazons’.  Sophie Neville was invited to watch the filming in Yorkshire, meeting Anthony Hopkins and members of the cast and crew who had worked on Swallows & Amazons in 1973. Brenda Bruce played Mrs Harbottle and Wilfred Josephs composed the music, Terry Needham was the Location Manager and Ronnie Cogan the Hairdresser.

‘I didn’t meet James Herriot until I worked in production at the BBC on Russell Harty in 1982. He was charming – an incredibly confident man. I don’t remember his wife being interviewed but she came with him to the studio and struck me as being terribly nice. She wore a proper dress, which is more than could be said for anyone else in the Green Room.’

A year later Sophie Neville appeared with Simon Ward’s daughter Sophie Ward in the adventure movie ‘The Copter Kids’ when they played sisters. Simon brought the family to watch the filming on location near Gerrards Cross. In September there will be a special tribute to Simon Ward at the Michael Croft Theatre when they will be screening ‘Young Winston’.

Sophie Neville gave a 40th anniversary talk on ‘Filming Swallows & Amazons in 1973′ for members of The Arthur Ransome Society gathering for their AGM at Brockenhurst College in the New Forest.  ‘Swallow’ , the dinghy from the 1974 film, was moored at Buckler’s Hard on the Beaulieu River for members to sail.

Arthur Ransome’s boat The Nancy Blackett ~ The Goblin in Arthur Ransome’s book ‘We didn’t Mean to Go to Sea’ was also the Solent for this event and for the Old Gaffers Yogaff regatta at Yarmouth, Isle of Wight

Meanwhile in the Lake District there were two wonderful events:

30th May 2013  ~ An outdoor screening of the movie Swallows & Amazons at Holly Howe (Bank Ground Farm) on the shores of Coniston Water,  with Captain Flint’s Houseboat, SY Gondola, in attendance.

To read the filmography posts about the 1974 film please go to ~ https://sophieneville.net/category/autobiography/