I opened the pages of the programme at the film premiere to find one of the publicity photographs of us taken at Bank Ground Farm. I wasn’t sure the face Simon was making would sell a cinema ticket.

But the film was now out. It had to sell itself. Everyone was waiting to hear what critics from within the movie industry felt about it.

Would this photograph ever sell the film?

I think my mother must have written to Barry Norman, inviting him to bring his daughters to one of the promotional events held at the Commonwealth Institute. I wonder if she met him at the Preview of the Premiere.  He was then presenting BBC Television’s Film 74  and writing a weekly column in The Guardian newspaper. Here is his reply: 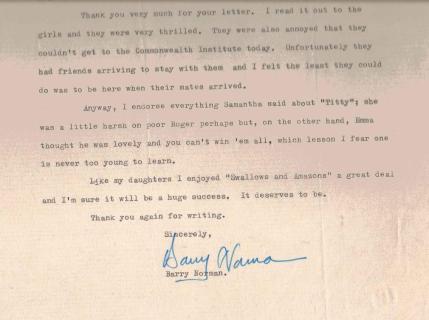 Barry Norman enjoyed it!  The Radio Times says that he was looking at ‘films for the family over the Easter holidays’.  Film 74 was shown on BBC TWO  at 10.15pm – and repeated on Fridays even later so he must have been speaking to parents. Here’s his theme tune.

One thing that strikes me when I open the March 1974 copy of ‘Films and Filming’, kept by my mother, is that ‘Swallows and Amazons’ has to be one of the most enduring movies to come out at the time. Sean Connery opted to appear with Charlotte Rampling in ‘Zardoz’. I’ve neither seen or heard of it. Why couldn’t he have played Captain Flint with us? I did see Steve McQueen in  ‘Papillon’  but had no desire to watch it more than once. Richard Lester’s version of ‘The Three Musketeers’ was also made in 1973. Even though it stared Oliver Reed, Raquel Welch, Richard Chamberlain, Michael York and dear Spike Milligan I don’t think it can have been broadcast on television as many times as ‘Swallows and Amazons’.  The magazine goes on to review ‘The Optimists of Nine Elms’ starring Peter Sellers, ‘Magnum Force’ starring Clint Eastwood, ‘Herbie Rides Again’ starring Stephanie Powers and many others, films I have never heard of. ‘American Graffiti’ came out in the States, directed by George Lucas starring Richard Dreyfuss, Ron Howard, Paul Le Mat and Harrison Ford. It made gross profits of more than U$200 million becoming one of the most profitable films of all time  but I wonder how many times it has been shown on British television this year? Do your children know anything about it? Has it been projected in the pouring rain for loyal fans sitting on a lake shore?

I his book, ‘A Theatre Project’ Richard Pilbrow says, ‘We had a success.’ He quotes Variety magazine, “Charming, delightful, beautifully made film,” but said it was, ‘Not a hit but a reasonable success that continues to play, principally on television, around the world.’ Richard goes on to quantify how it did financially. ‘The world of film finance is a distinct mystery. Our production costs were just under £300,000. Over the years, income trickled in from an international market. Curiously the costs inexorably rose to match the income. The costs of marketing the movie always seemed to equal receipts at the box office. In 2004 our film actually recouped. That’s why I have the temerity to call it a success.

Not all the newspapers thought so in 1974. I’ll find some of the articles for the next posting.