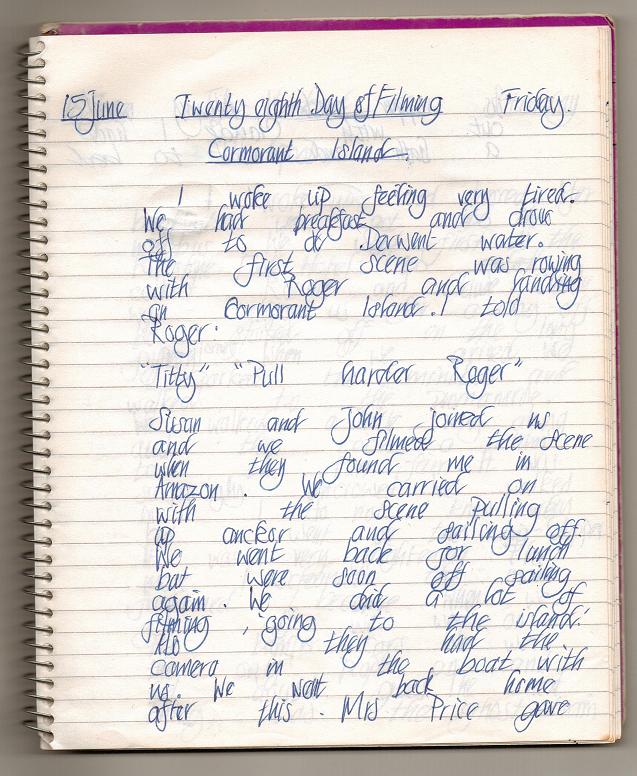 When we auditioned for Swallows and Amazons the emphasis was on sailing. Could we sail? In fact I needed to be good at rowing. Titty and Roger row back form the Charcoal Burners, I rowed the Amazon from Wildcat Island and here we were rowing across Derwentwater to Cormorant Island. This was more difficult than normal as Swallow was wired to the camera pontoon. 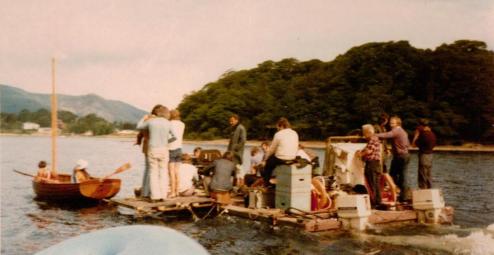 When I look at the 16mm footage my father took of me rowing at home before we left to film in the Lake District I cringe. My blades were high above the water, hitting the surface with terrible splashes but I seemed to achieve my objective.   I managed to fit an improvised mast to our Thames skiff and even made my own sail. It doesn’t look great, but I think Arthur Ransome would have approved.

Simon West and Suzanna Hamilton joined us for the scene when the Swallows lower the Jolly Roger and start to sail the captured the Amazon back to Wildcat Island.  I can only imagine that I changed my costume in one of the support boats. I think the scene may have been shot with two cameras on different boats ~

This shot shows Claude Whatham using the punt,* which somehow managed to accommodate Dennis Lewiston, the 35mm Panavision and quite a few crew members, while Richard Pilbrow remained on the camera pontoon with Eddie Collins operating the 16mm camera.

I remember the scene itself as being difficult to achieve in terms of sailing. Swallow has a keel, and Amazon with her centre board is much the faster dinghy. It is not like racing two boats of the same class. After hauling up the anchor Suzanna and I battled to turn the Amazon, not wanting to wiggle the rudder and jeopardise her pins. I remember Simon calling advise over the water.  He stalled and we caught up, trying to get close together for the shot. The result was a photograph used on the front cover of the next Puffin edition of the book.

* I may be wrong about these photographs. The still surface of the water in the shot of Titty alone in Amazon suggests that it was taken later on, when we filmed the burglars landing on Cormorant Island with Captain Flint’s trunk, but we probably had a very similar set up on this more sparking day ~ 15th June 1973.

We went on to film various shots of us sailing on to Wildcat Island, when I think the camera was in Swallow capturing close-ups of a triumphant Captain John. He did indeed do well.