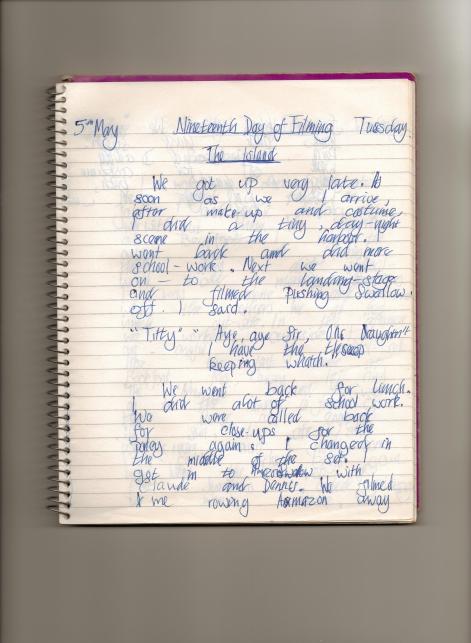 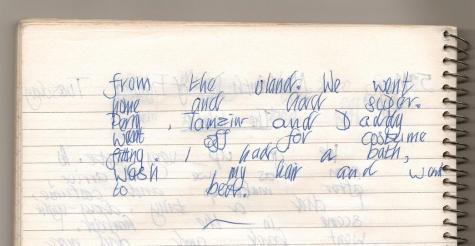 When David Wood constructed the screenplay of Swallows and Amazons he introduced dual action soon after the Swallows arrived at the island. By this I mean that he split us up a bit – John went to fetch the milk from Dixon’s farm whilst Susan and I were teaching Roger to swim.  This isn’t quite as Arthur Ransome wrote but it added vitality to the script, moving it along.  I reckon the Director, Claude Whatham needed to avoid a gang scenario of Five go to Treasure Island at all costs. It also enabled us to get on with our school work since no one actor was in every scene.  I was in all the scenes shot on this day 5th June (I wrote 5th May by mistake) but went back to my lessons whilst Claude was out on the pontoon filming John and Susan jibing Swallow – a pick-up shot set into the long shot, when I waved them goodbye from Wildcat Island, recorded on 2nd June.

At this stage in the story Arthur Ransome actually split the action into three. John, Susan and Roger sail off to find the Amazon river, Titty is left alone on the island with her telescope, while the Amazons are busy plotting and planning at Beckfoot.  Up until this time most films followed linear stories – this happened, then that happened – a bit like my diary. My favourite wartime drama A Town like Alice, which stars Virginia McKenna, is an example of this. It’s a road movie.  Lovely – but I need to watch it whilst doing my tapestry.

As it happened the method of running three storylines at once became all the rage in television dramas of the 1980s and 1990s, so when Swallows and Amazons was first broadcast on television it felt fresh even though it had been made six or seven years previously. The playwright John Mortimer said that when he first started writing three strands of action for Rumpole of the Bailey it terrified him. Would the audience be able to follow what was going on?  Now every detective story breaks into three as soon as possible, while soap operas keep a number of storylines boiling furiously. The technique helps to pace the action, up the suspense and gives the director much more flexibility in the cutting room. Apart from anything else it makes it easier to bring episodes in at the exact length required by the television schedulers. One reason why credits roll after a programme is because the Presentation Department can alter the speed they run at. Did you know this? It means that every story can be made to last exactly 37 mins 30 seconds.

Nowadays linear story-telling in movies, such a The Kings Speech seems to be received as more cinemagraphic.  I think that multiple action just went too far. ‘Flashbacks’ seem dated and running two storylines in different time periods can be confusing. I couldn’t do my embroidery whilst watching A Social Network.

Meanwhile two or three things were happening behind the scenes in the Lake District.  Terry Needham, the Second Assistant Director, found that most of the men who had come forward to be Supporting Artists for the scene soon to be shot at Bowness were refusing to have their hair cut. My mother was astonished. They couldn’t portray the Lake District unpopulated by men. Only a few, very elderly gentlemen, who didn’t have much hair anyway, agreed to a short-back-and-sides.  And my father.  He was more than happy to receive a free hair cut. Ronnie Cogan brought out his scissors and snipped away there and then on the shore of Coniston Water. Someone grabbed Dad’s Bolex and took a few shots for posterity:

Dad missed seeing me capture the Amazon. Although it seems I was all alone in my story line, this was not the reality. I rowed away from Peel Island with the DoP Denis Lewiston, his 16mm camera and a reflector board held by Claude Whatham who was also tucked into Amazon’s stern. No wonder I was tired by the end of the day.

12 thoughts on “‘Oughtn’t I have the telescope?’ ~ Arthur Ransome’s story breaks into three strands”