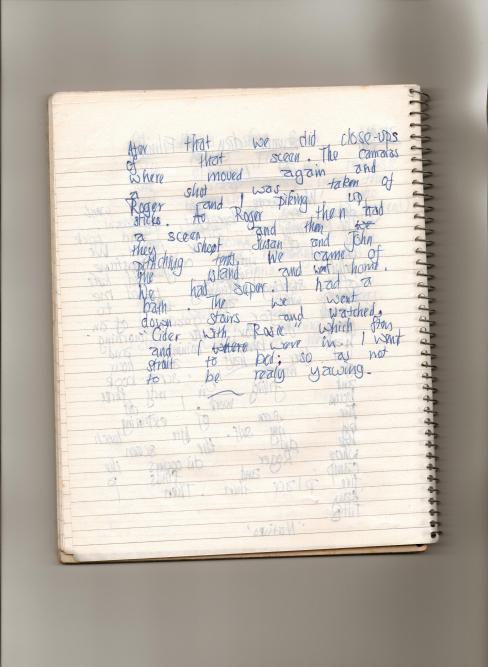 Arthur Ransome’s description of Wildcat Island is based on two real islands. The landing place and open grassy camp site illustrated in the books can be found at Blake Holme on Windermere but when Richard Pilbrow went there in 1972 he was so disappointed by the sight of caravans, and the fact it was so near the shore, that he decided to make the film almost entirely on Peel Island where you find Ransome’s Secret Harbour. We never went to Blake Holme.

It was Peel Island on Coniston Water where the real Swallows, the Altounyan children, camped. Roger Altounyan told Bill Frankland that he secretly spent the first three nights of his honeymoon camping there. It must have been magical. We loved going there – it was hugely exciting, even in the rain. There is something about the steep sides, which makes it like a fortress, the ancient Viking settlement WD Collingwood believed it to be.

Had I been producing Swallows and Amazons I would have used Peel island for the unique Secret Harbour but used the peninsular nearby on the mainland for the landing place, if at all possible. There is a nice open beach there and one wouldn’t have had to lug all the heavy paraphernalia of filming over the water – you can imagine time and effort  involved in taking a 35mm Panavision camera across with its mountings and track. I don’t know how they powered the arc lamps we needed to light the campsite, which was quite dark beneath the trees.  They must have run the cables under water. We loved crossing over there but getting us back for lessons and lunch wasn’t easy. There was no loo.

But – the wonderful thing is that now, when children reach the island, nearly all the places from the film are there. The Landing Place has nearly washed away.  We never knew it at the time but one great secret is that it was created for the film. They must have dumped a huge amount of shingle there.  The other secret is that there weren’t actually enough trees for the Swallows to erect the tents their mother had made for them. Two had to be added by the construction team. Arthur Ransome’s tents are not as easy to put up as you’d imagine. It is difficult for children to get the rope taut enough between the trees to take the weight of the canvas. You need to use wagon knots or twist it with a stick. If you tie the rope too high the tents ruck up. The reality was that Suzanna had Bobby-the-prop-man to help her.

One thing that is not a secret, but can take you unawares, is that there never seems to be any firewood on Wildcat Island.  It is the reason why the Swallows went to the mainland in the book. Roger really did struggle to find sticks to pick up on that wet day in May. Mine were carefully set out for me to find by the Designer.  Poor Roger did fall over and he did get quite badly scratched by thorns. Claude gave him a bit of  ‘Danger Money’ for being brave about it and not complaining.

I’m not sure if Sten had ever received Danger Money when he played Laurie Lee in Cider with Rosie, which Claude had made two years before. We watched it that night when it was broadcast on television. It must have been shown quite late as it was was labelled as avant garde.  We had to stay up as of course VHS machines hd not been heard of.

Rosemary Leach played Laurie’s long-suffering mother, Mrs Lee, quite beautifully. She was later to take the role of Mrs Barrable, the Admiral, in the BBC series Coot Club. Mike Pratt, who played Mr Dixon in Swallows and Amazonswas Uncle Ray, and Young Billy – John Franklin-Robbins was The Stranger.  Claude cast me as a little girl from Slad called Eileen Brown, who Laurie Lee always said was the first person he ever fell in love with. He was a friend of Mum’s and was around during the filming, since he still had a cottage in Slad. I’d been to a village school in the Cotswolds myself and enjoyed being in the classroom scenes, despite have to wear a drab and rather itchy green dress.

I was too shy to put myself forward when Claude asked if anyone knew the chants to playgound skipping games, but I did work hard to prepare for my big scene. I had to play quite a difficult piece on the piano, accompanying the ten-year-old Laurie Lee as he sawed away on his violin at the village concert, while his motherlooked on with tears in her eyes. I was only given the music three days before the filming and had to practice eight hours a day, for those three days, before I got it right. We plodded through Oh, Danny Boy but were so relieved to get it right that our smiles were real enough. At one point Claude took a deep breath and said, ‘Do you think you could play a little faster?’  I looked at him and replied, ‘They’re crochets. They don’t go any faster.’ He claimed that he didn’t know what a crotchet was.

Wilfred Josephs, who was familiar with crochets, wrote the most beautiful music for Cider with Rosie. You can listen to some of it on You Tube ~

4 thoughts on “Secrets of filming ‘Swallows and Amazons’ on Peel Island, Coniston Water ~ in 1973”