It is aways wonderful to hear how the film of Swallows and Amazons has effected people’s lives.  I have just had such an interesting e-mail from Australia that I asked if I could post hit here. I only wish that Claude Whatham was alive to read it.

Did anyone else know about the the clock on the mantelpiece at Bank Ground Farm?

Dear Sophie,
I can not tell you how much I am enjoying your website. I’ve searched for scraps of material regarding the making of Swallows and Amazons for decades, but you post more information in one day than I gleaned in a lifetime. It’s a fabulous insight, and one I really appreciate.
I became a film-maker largely because of Swallows and Amazons. I’ve written a small piece about this, which is going to be published in a promo for one of my film-making books. As a nine year old, I stumbled across Wild Cat Island just days after seeing the film. I was so thrilled to be standing where the film had been made, and so excited to see how clever use of the camera could exaggerate the feeling of a location and capture the magic of performance, that I set out to discover everything I could about film. It was a life-changing moment.
My daughters (5 and 7) adore Titty, and we are all impressed by your acting. I’ve directed my girls in a couple of things, and I know they gained confidence from having seen you perform. When Tabitha, my eldest daughter, saw the film for the first time, she burst into tears at the end. It was a release of pure joy, and is testament to the quality of the film.
I live in Australia now, but returned to the island in 2010 with Tabitha and Harriet (rowing all the way from the other end of the lake). We stayed at Bank Ground Farm. This months we went back and were lucky enough to sail Swallow into the Secret Harbour. It was a windy October day, and quite a frantic sail, but I can honestly say it was one of the highlights of my life.
When reading your recent post about set dressing at Bank Ground Farm, I wondered if you’d noticed that the clock on the mantlepiece is still there. It’s on the other mantlepiece, I believe, but it is still there. I have no idea whether it is a prop that was left behind, or whether the film-makers used the clock that belonged to the farm.
Thanks again.
Best wishes,
Chris
Christopher Kenworthy
Our set designer or ‘Art Director’ on Swallows and Amazons was Simon Holland. He worked tirelessly with his assistant Ian Whittaker and team of Prop men, making every effort to use absolutely authentic props and set dressing. It must have involved quite a bit of research. Holly Howe, for instnace would not have had mains electricity or back in 1929, so he made sure oil lamps were on set. These would have been modified by the Sparks so that it looked as if they lit the room in those evening scenes when we were busy packing.
The people of the Lake District still remember Simon asking if he could buy old tins of food. It seemed such an unusual request. When it came to making labels for the cans of ‘Pemmican’ he painted them himself ~
Simon had worked as the set dresser on the thriller Callan starring Edward Woodward, that we all saw in 1974. He had earlier been the Art Director on Bartleby, which featured Paul Scholfield with John McEnery in the title role.  Swallows and Amazons must have been one of his first features. He was only thirty-two that summer of 1973.
Simon Holland went to to work on well known movies such as Equus, Greystoke, Quadrophenia, The Sleeping Dictionary set in Sarawakand Tales of the Riverbank which starred Stephen Fry as the Owl and Miranda Hart as Miss March. He sadly died in 2010 at the age of 70 but will be remembered fondly by us all.
I have found the entry that Suzanna wrote in her diary at this time when we were filming at Bank Ground Farm. She drew a picture of the blue and white checked dress she wore and drescribed an interview with a reporter. 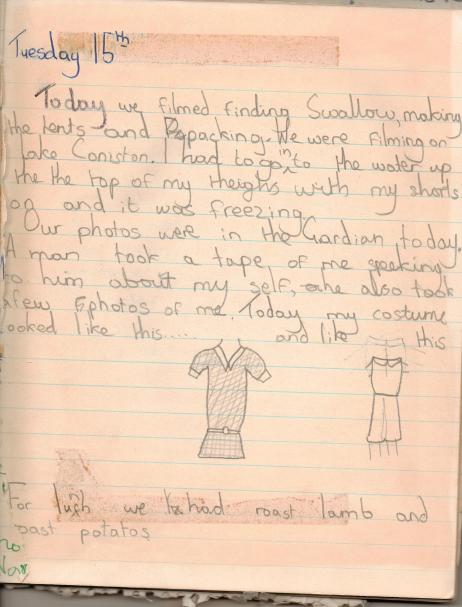 This is the newspaper clipping that Suzanna stuck in her dairy that featured Virginia McKenna and the six of us children in one of the old motors that Simon Holland found to dress the Railway Platform set at Haverthwaite Station on the first day of filming.

3 thoughts on “The clock is, indeed, still on the mantelpiece at Bank Ground Farm”