Before Jean McGill arrived at the Oaklands Guesthouse in Ambleside, to transport us to the location, a letter arrived. It was from my Daddy who somehow must have found time to post a quick note while taking my sisters to school. We were, indeed, all looking forward to the wrap party to be held that evening. There was much to do before it started. Twelve scenes are listed on the Unit Call Sheet and it was pouring with rain.

Here we are – it was Ernie Russell who was in charge of the action and support boats. Does anyone know where he is now? The day proved difficult and wet, but everyone was in high spirits. It was the last day for most. 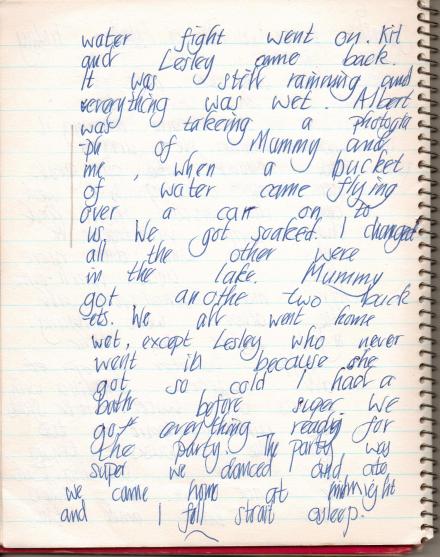 It was a great Wrap party, held at the unit hotel. Suzanna noted that it didn’t start until 10 O’clock. 10pm! Very grown up. It must have been the talk of Ambleside. Mum took off her Donny Osmond hat and wore a long high-collared dress in pink gingham. I wore the brown and black velvet pinafore dress Mummy and Daddy had bought me in Carnaby Street when we went up to London for my first interview with Claude Whatham. Everyone was kind and jolly. For a while the party revolved around us. We enjoyed the dancing so much didn’t want to leave, but it was evident that the adults wanted to start to play. As you can imagine, no one could persuade us to go to bed. Jean McGill saved the evening by organising a conga. Having led a sheltered life I had never danced the conga before and thought it the greatest fun. Luckily the Carnaby Street dress was well designed for the job. We conga-ed around the Kirkstone Foot Hotel with the entire crew. Somehow we ended up conga-ing into her mini-bus and were whisked back to Oaklands before midnight.

This clip shows Jean McGill (in red) with Sophie Neville (in blue tracksuit top) and Albert Clarke our stills photographer. Our Chaperone, Jane Grendon, is teasing Terry Needham, the second assistant director. Simon West, playing John Walker, stands by Derwentwater in costume. Neville C Thompson (in yellow shirt) smiles at our glamorous tutor Margaret Causey while Graham Ford and others get into a support boat. Actor Ronald Fraser walks towards the lake and waiting boat, followed by hairdresser Ronnie Cogan. You can see Swallow in the background whilst Jean McGill chats to my mother, Daphne Neville who is wearing her yellow, flowery Donny Osmond hat. She originally had a pink flowery version, which Claude admired (and wore himself) but it blew off and sunk to the bottom of the lake.