A few years ago, on a wet but beautiful day in Cumbria we set off on a quest to find some of the locations used in Richard Pilbrow’s 1974 film of ‘Swallows and Amazons’.

To my delight our journey started with a drive down through the streets of Rio (Bowness) and along the east shore of Windermere to the Lakeside and Haverthwaite Railway Station at the southern end of the lake (or Antarctica as Titty labelled the region). It was here that we spent our very first day filming ‘Swallows and Amazons’ back in 1973. I had not been there since.

We had a chat to the train driver who explained that they now run six journeys a day. From Haverthwaite, the steam locomotives run alongside the River Leven to Lakeside Station. From here you can take a native steamer back up to Rio (the Bowness pier) or to the Far North (Ambleside, which is the town at the head of the lake where we lived whilst filming in that long distant summer when I was twelve years old.) 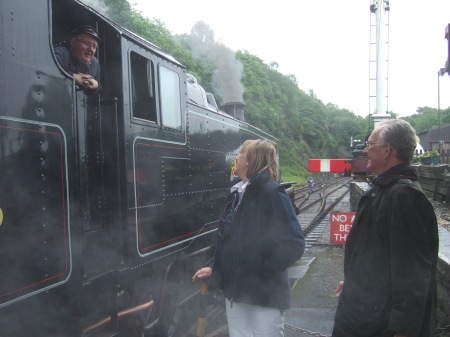 Whilst we used engine number 2073 in the movie, this steam locomotive 42085 was built in 1951. It uses about two tons of coal a day but it utterly magnificent.  The driver probably uses rather a lot of steam oil too.  It’s a smell I relish, familiar since childhood days spent on steamboats. I remember it from the SBA steamboat rally held on Windermere in 1991, which I describe in Funnily Enough.

Curiously, Haverthwaite Railway Station looked cleaner and shinier than when we used it as a film location in 1973. I can only suppose it was still in the process of being restored back then, when Simon Holland our set designer cluttered it up with push bikes and luggage trolleys.  Much to our surprise, the yellow taxi we were transported in during the filming was actually driven along the platform. 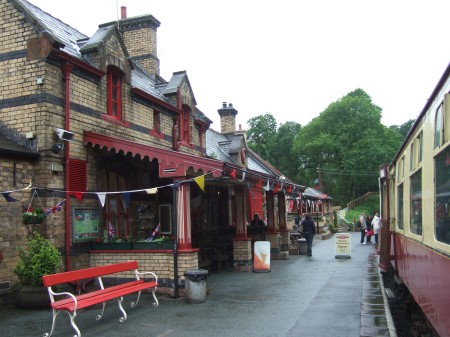 We climbed aboard the train and I explored, as Titty would have done, discovering people seated inside from far distant lands.

David Wood’s screenplay for the film of Swallows and Amazons, directed by Claude Whatham, opens to find the Walker family cooped up in a railway carriage compartment as they travel north for their holidays.

We saw this distinctive carriage in a siding as we steamed down the valley. Funnily enough when I reached home, later the next day, I came across a photograph on the internet I had never seen before. It was of Virginia McKenna, playing Mrs Walker, reading a magazine inside the compartment. Strangely it turned up when I Googled my own name – Sophie Neville.

The train is not included in Arthur Ransome’s book of Swallows and Amazons, written in 1929, but he does feature locomotives in his later novels, notably Pigeon Post. I clearly remember filming the BBC adaptation of Coot Club at what must have been The Poppy Line, a steam railway in north Norfolk when Henry Dimbley, playing Tom Dudgeon, jumped aboard the moving train and met Dick and Dorothea.

I jumped off the train at the Lakeside Station to meet up with Peter Walker of Mountain Goat. Peter has carefully researched and put together a Swallows and Amazons tour, exploring ‘High Greenland’, the ‘Forest’ and ‘High Hills’ to discover the places where Arthur Ransome lived. We set off in search of the places where he fished, wrote, and drank beer.  It was fascinating – and proved an excellent way to spend a day in the Lake District despite the rain. 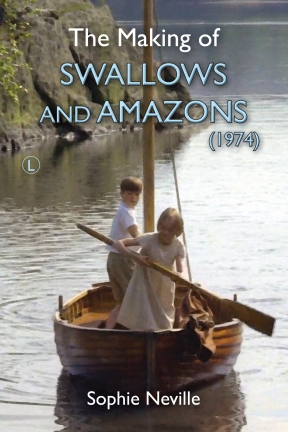 There is also a similar ebook, entitled ‘The Secrets of Filming Swallows & Amazons (1974)’ available from all ebook distributors including Amazon

If you have any questions, do write in.