On 7th June 1973 the seventy-strong crew busy making the movie ‘Swallows & Amazons’ arrived at Bowness-on-Windermere in Cumbria to film the scenes when the Swallows decide to explore Rio, the native settlement due north east of Wildcat  Island. The weather was glorious.

I have just been sent a scrap-book that contains a clipping from the Evening News, when reporter Terry Bromley joined the film crew for a day. He lists many of the forty or so local people who either appeared as supporting artists in the scenes or provided action props such as vintage cars and traditional boats. Everyone, including the drivers and boatmen were dressed in costumes from 1929 ~ 44 years before 1973. 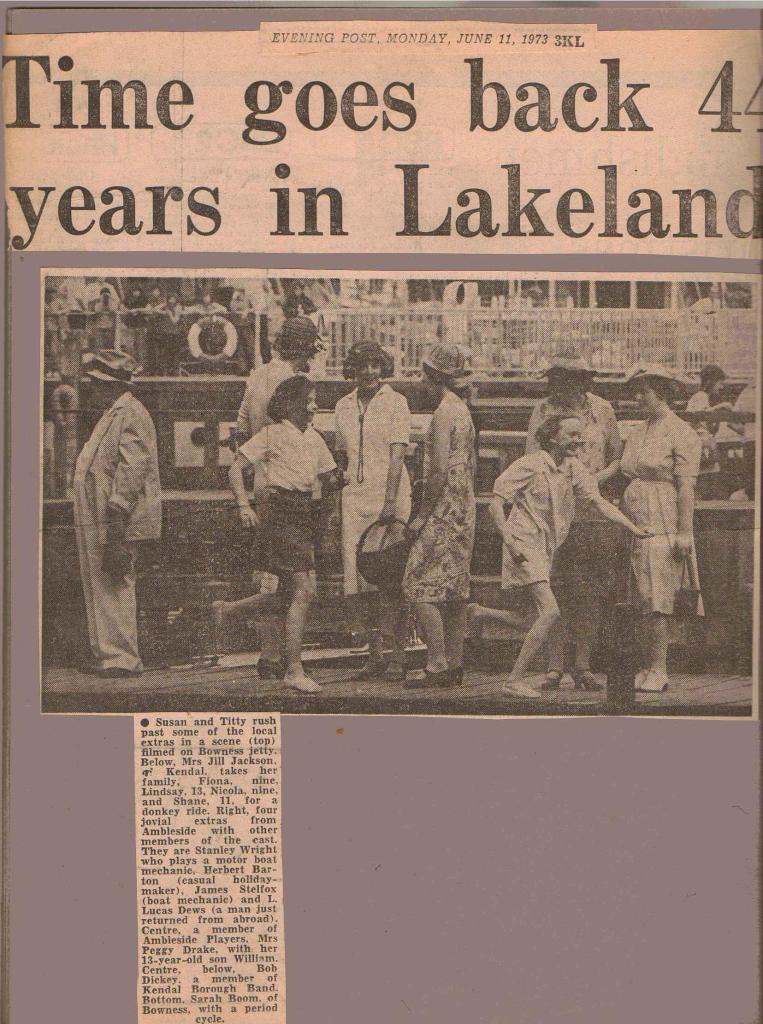 The caption reads: “Susan and Titty rush past some of the local extras in a scene filmed on Bowness jetty.”

“Four jovial extras from Ambleside with other members of the cast. They are Stanley Wright who plays a motorboat mechanic, Herbert Barton (casual holiday maker), James Stelfox (boat mechanic) and L.Lucas Dews (a man just returned from abroad).”  They were dressed by Wardrobe Master Terry Smith, while other period details were organised by the Art Director Simon Holland, his Set Dresser Ian Whittacker and crew of prop men lead by Bob Hedges.

“Sarah Boom of Bowness with a period cycle, a member of the Kendal Borough Band and a member of the Ambleside Players, Mrs Peggy Drake, with her 13-year-old son William.”  I know that the Kendal Band wore their own, original 1020’s uniforms as they played in the bandstand.

The caption reads:  ‘Janet Hadwin and her father, Jack Hadwin, stand by an Austin car and BSA motor cycle of the period.’ The photograph below shows Sophie Neville, Simon West, Suzanna Hamilton and Sten Grendon in a pony trap during a break in the filming.

For a full list of actors and supporting artists who were involved in the filming please see the second edition of ‘The Making of Swallows and Amazons (1974)’, published by The Lutterworth Press, which can be purchased on-line or ordered from your local library.

If you would like to see more behind-the-scenes photos and home movie footage taken in Bowness on 7th June 1973 please go to earlier posts: