A school friend of mine sent me this advertisement. She had found it in a teenage magazine we all read at the time called Tammy and Sandy. There was a similar one in The Sunday Times newspaper – and no doubt many others. Film posters hung in the London Underground and at cinemas throughout the country. Swallows and Amazons was to come out, on general release for the Easter Holidays.

My mother subscribed to a press clippings agency called Durrant’s ~ Durrant’s of Herbal Hill London ECI ~ who, for a fee of £50, sent her all the articles written about the film.  The Prince of Wales told a friend of mine that he never reads the newspapers. I know why. Reading about yourself is upsetting – or can be, especially if the facts are incorrect.  My mother didn’t mind.  She highlighted the bits about me, filling four albums.

After entertaining the Daily Express so nicely in the Lake District this is what they printed about the film. I would  think this is written by Ian Christie (1927-2010) the jazz clarinetist, who had formed the Christie Brothers Stompers with his brother Keith, and became a member of Humphrey Lyttelton’s band. He worked as a theater and film critic for the Daily Express for twenty-six years. Born in Blackpool and a habitue of Fleet Street pubs he held fiercely Left-wing views.

The same black and white photograph of me appeared on the front cover of The Daily Telegraph with the title ‘One Swallow won’t make a Summer’. Were they right?  The Scotsman said:

However, Russell Davies of The Observer, another jazz musician who now presents Brain of Britain on BBC Radio 4,  saw that the film of Swallows and Amazons  had niche. (If you click on the article it will enlarge).

Others recognised it as an innocent nostalgia trip ~

Others just loved it:

Rosemary Caink said that her three children, ‘completely identified themselves with the children in the story.’ 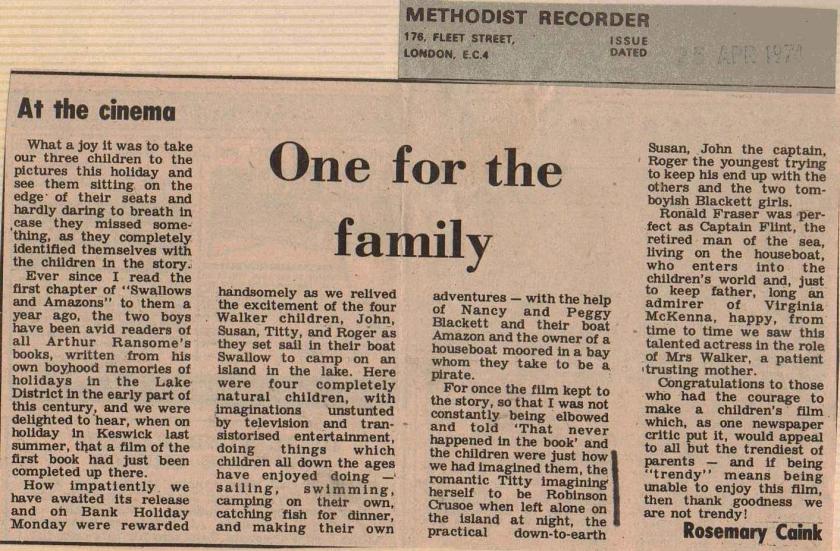 My favorite article wasn’t found by Durrant’s. It was written in The Brownie and must have been sent to me by a fan.

I have many more articles ~ please let me know in the Comment box if you would like to see more. Otherwise I will move on to write about how the public responded and what happened next.