I have been sent a newspaper clipping dated 15th June 1973, which appears to have been published in The Mirror, a national daily newspaper here in the UK. It describes a scene shot for Swallows & Amazons (1974) that was never used in the finished film and proved something of a discovery for me.

Whilst on their way to visit the charcoal-burners, Captain John shows the crew of the Swallow how to lay a patteran, a secret gypsy sign, usually made from twigs or vegetation, to point the way.  I remember the scene from Arthur Ransome’s book with affection but I  have no recollection of filming this in the Lake District. 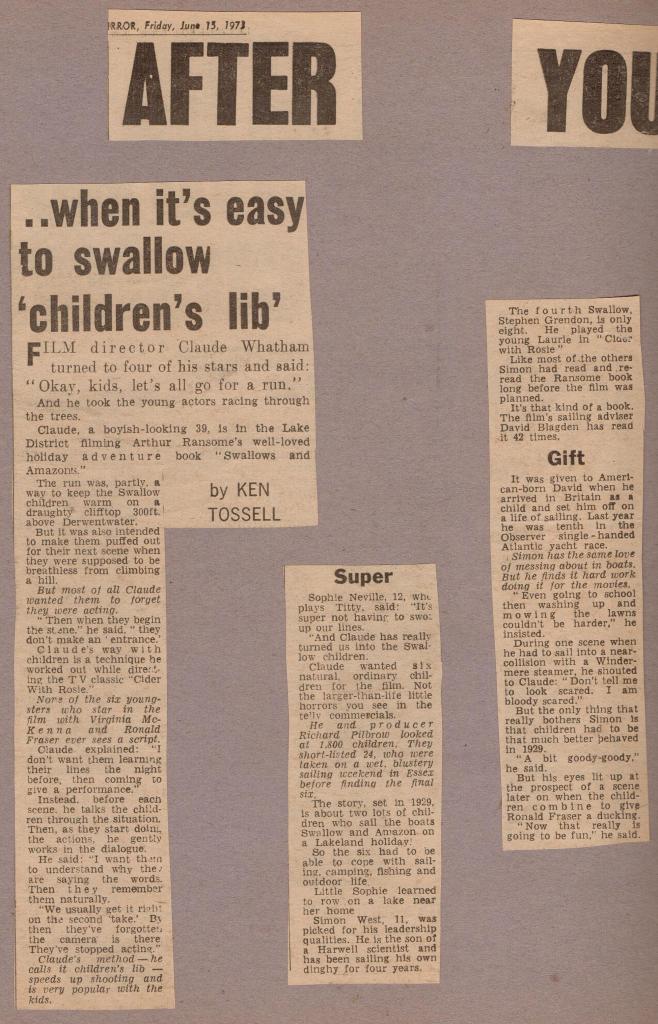 I do recall that our director, Claude Whatham would take us on a quick run just before shooting a scene so that we would be both energised and genuinely breathless as we delivered our lines. I expect it was his secret way of obtaining natural performances out of us children. Here we can be seen in rehearsal wearing our Harry Potter-like nylon track-suit tops for warmth, while the big old 35mm Panavision camera was tilted down on us. Claude can be seen holding the script we never read. We were much more interested in the patterans.

Claude loved running. When he retired from film making he would regularly run around Anglesey in North Wales, where he lived, covering miles each day even in his early eighties.  I have always been more excited about galumphing, the art of running down hill, taking leaps as you go to cover more ground.  Arthur Ransome must have tried this as a boy on holiday in the Lake District as he has the Swallows galumphing like anything at this stage in the story, on their way back from visiting the charcoal-burners. They get so carried away that some of them miss the patterans that had been so carefully laid on their way up the hill. There must simply have not been enough time to include this detail in the finished movie. I wonder if the original footage still exists.