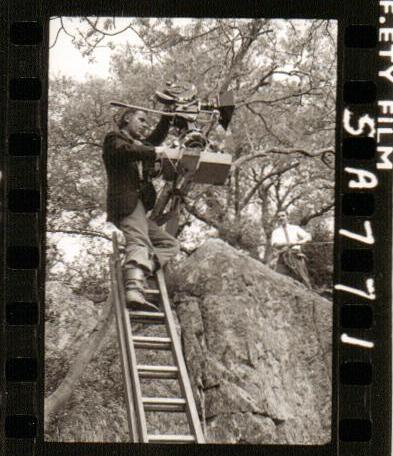 When I was a little girl, I was an avid viewer of Blue Peter, BBC Television’s flagship series for children. My favorite items would be profiles that were run from time to time about life behind the scenes at Television Centre. It was only later, whilst working for the BBC as a researcher, that I was told the terrible truth. The set designer Bruce Macadie said that such items were produced when the editor of Blue Peter was unexpectedly let down by a guest or couldn’t think of anything more newsworthy. I didn’t care a hoot. I was interested in how films were made from the age of about nine.

‘What a peculiar girl!’  I hear my friend Nac saying.

The reason was that I had rather a peculiar upbringing. I once described myself in an application for a job as a television director as a ‘Child of the studio floor’. The reason was that in 1969, when I was about eight years old, my mother became an in-vision announcer, reading the regional News and appearing on our crackly black and white set to brightly declare what would be shown that evening.  She worked at the Harlech Television Studios in Cardiff, alongside Martyn Lewis and Liz Carse. She would also descend in an oval wicker basket chair from which she would present a one-woman Children’s programme on called It’s Time For Me. This looked liked magic, and I wanted to know how it was achieved.

‘I was paid the same amount as a short-hand typist.’ The men were paid more than the women and her schedule was gruelling. On top of this she would drive 72 miles to the Cardiff studios in a rusty Mini van. Even though this was replaced she went part-time. Having become an expert on how long script bites took to read in different accents she would ‘whizz down to Bristol’ to read the letters on Any Answers for the producer Carol Stone.

‘But how did the basket come down?’

‘Oh, the rope was attached to a pulley on the studio lighting rig and  lowered  by three prop men.’

I would often travel down with my mother to be shown around various studios. I remember sitting behind the Dalek-like cameras watching a live afternoon programme called Women Only being recorded at HTV Bristol. Mum presented it with Jan Leeming and a rotund TV cook called Tony. He had to wear a bright yellow chef’s hat and top so that they would come across as ‘chef’s whites’ rather than weirdo glowing garments on everyone’s black and white television sets. Mum spent ages looking for clothes to wear in vision as she was not allowed to wear either spots or stripes since they were liable to strobe. Dresses made from crimplene were all the rage but (luckily) she was banned from wearing this as TV screens would pick up on any static that it might exude. Sparkling garments were a no-no.

You wouldn’t think that Gloucestershire would be a hot spot for the film industry in the UK but in 1971 I was able to watch a film crew making a drama on location in Slad near Stroud, when I was chosen to play Eileen Brown in the BBC adaption of Laurie Lee’s memoir, Cider with Rosie directed by Claude Whatham. It had nothing to do with luck. I was the only little girl they could find with long hair who could play the piano.

In 1972 I was given a tiny non-speaking part of a ‘Woodchild’ in Arthur of the Britons that was made near Woodchester by HTV.  I had forgotten all about this until I saw a Youtube clip. I gather the serial has become cult viewing in the States.

Around this time the BBC made an adaptation of Jane Austen’s Persuasion, shot on location in Bath. We went down to be film extras in this and in a BBC drama called Song of Songs.

By the time I was cast as Titty in Swallows & Amazons I was relatively experienced. Later that summer I was in a Weetabix commercial and the next year I was invited to appear on a number of magazine programmes to publicise the movie. I remember being interviewed on Nationwide and profiled at home on Animal Magic.

Inevitably one thing leads to another and I was soon asked to audition for a number of subsequent films. Inflation was roaring at 17% in the mid-1970s and I don’t think any of these were ever made but it was good interview experience. I ended up at Shepperton Studios doing a screen test for a musical version of The Old Curiosity Shop. This was serious stuff, shot on a film stage in Victorian costume. My music teacher spent ages teaching me to sing All I Want is a Room Somewhere but despite endless discussions nothing more came of it. However looking around Shepperton had been amazing. At some stage I had also auditioned at Pinewood Studios. I had been shown around the set of the latest James Bond and even had a go on the swing featured in Chitty Chitty Bang Bang. Mum wouldn’t let me tell anyone at school about it, as I might had come across as swanky. But as film studios were not open to the public then it did add to my education.

Although lanky, and focused on GCSEs, I managed to gain a leading role in an adventure film when I was fifteen. This proved interesting it involved working with stunt men including Vic Armstrong, who later became Harrison Ford’s double. We got to shoot from helicopters. At times the camera literally showed me shooting from a helicopter with a bow and arrow.

And then there was an opportunity to be in Crossroads. What an experience! I was various wedding scenes and the crowds who turned out to watch were unexpected. I was eighteen by then and did it purely for the money. I’ll see if I can find the article I wrote about it for my university magazine. Please let me know the name of the actor playing Kevin. I was meant to be his sister.

To see more about Mum’s career please see her website