When the movie Swallows & Amazons was released forty years ago the mere idea of Blu-ray or DVD recordings had not been dreampt of. When my father asked about acquiring a copy of the film he was quoted £450 for a set of 35mm reels designed to be projected on a cinema screen.  The sum was more than I received for working on location, even though I had a lead part. I was, however, sent a copy of the LP brought out to accompany the film. It was narrated by David Wood who wrote the screenplay and included Wilfred Joseph’s full score. You can still buy these online today.

Although we were never informed,  I now discover that at one time you could buy film clips on Supper 8, to project at home. You could probably still find this on eBay.

When home video recorders first came out in the late Seventies I was working for Virginia McKenna. I remember her husband Bill Travers telling me that they had decided to go for Beta rather than VHS.  Almost inevitably Swallows & Amazons was released on VHS, in a big fat box, and came into its own as families snuggled down to watch it at home on rainy afternoons.  There were a number of cover designs:

This one distributed by Warner Bros. is featured on the international movie data base. Click on the image more information and other cover designs.

Readers have sent in an image of the reverse:

There have been different versions marketed all over the world. The movie became so popular in the Baltic and Czech Republic that it has been dubbed a number of times:

For years the DVD has been sold as a double bill with The Railway Children, which was also financed by EMI Films.

This is the double-bill released by StudioCanal:

In 2008 a DVD of very good quality was released by the Daily Mail, with a picture of me looking like a baby monkey on the wrapper. We were given absolutely no warning. The first I knew of it was a friend ringing up to ask me if I could spare a DVD for his kids, ‘Someone’s swiped the office copy.’

It was featured on the front cover for seven days, as well as in the magazine. I am often asked if we get residuals for distribution rights or when our images are used to promote newspapers but I have never received anything. This version did at least have end credits. There are reviews on Amazon about a DVD that lacked these. I was amazed that anyone even noticed but viewers assured me it was an outrage. 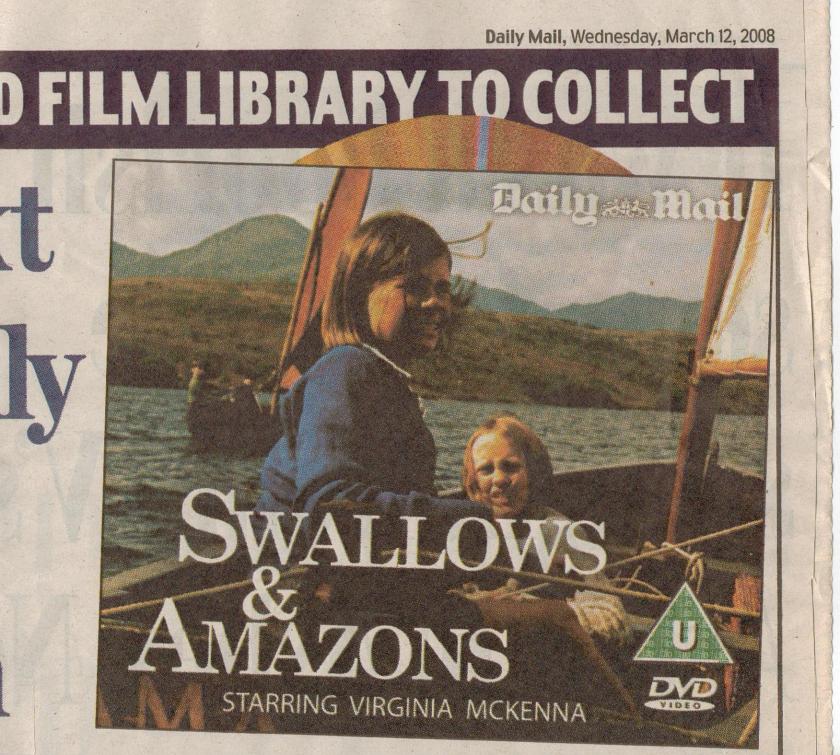 I am glad the movie can be watched and enjoyed by successive generations of children. The most inspirational cover of all was on that very first boxed VHS, which featured us sailing up Derwentwater:

In 2014 a remastered Blu-ray and DVD with an Extras package was launched by StudioCanal to celebrate the 40th Anniversay. If you are thinking of buying a copy, this is the one to get. It is available on Amazon by clicking here.

There was also an edition in French:

They later issued a DVD (without extras) adding striking new graphics to the old poster. A sticker advertising the 2016 film of Swallows and Amazons was added to promote the release:

Does anyone know of any other VHS or DVD covers?  Do add your comments in the box below.

StudioCanal, who own the rights to the film, have a set of stills you can see by clicking here. To see more stills from the film please click here

The Making of SWALLOWS and AMAZONS (1974)

Ride the Wings of Morning

There was an error retrieving images from Instagram. An attempt will be remade in a few minutes.