‘Paddling with Peter Duck’, John McCarthy’s  documentary for BBC Radio 4, portrays the boats owned by the author Arthur Ransome and includes extracts read from his classic book Swallows and Amazons by Kate Taylor.

While the broadcast is a portrayal of Arthur Ransome and his boats, it touches on his friendship with the Altounyan family who inspired him to embark on writing the series of twelve Swallows and Amazons books. It is easy to understand this when looking at their photographs. 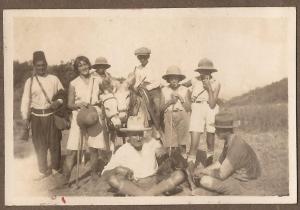 The Altounyan children with friends in Syria.

The girls seem to be Taqui, Brigit and Titty

Could it possibly be Arthur Ransome sitting on the right? He visited the family in Syria in 1932, when he must have been about forty-eight, but was never known to have worn shorts, although it would have been exceptionally hot in the Middle East. Click on the photos to enlarge.

Is this Arthur Ransome ? sitting on the bow of Peter Duck in Syria, the chap wearing the same hat and clothes as in the photo above? He took this  dinghy out to Syria as a gift for the Altounyan  children and wrote his novel Peter Duck while he and his wife Evgenia were  staying with the family in Aleppo. 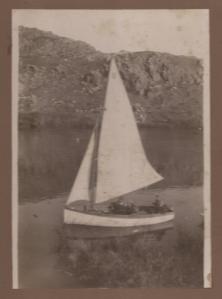 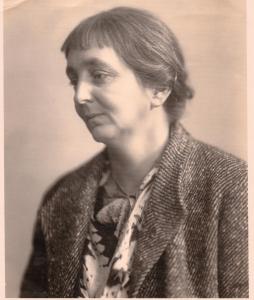 Was she the model for Mary Walker, the Swallows’ mother who grew up in Australia? 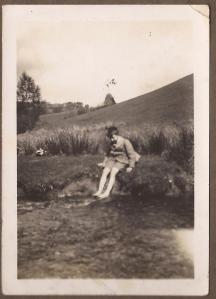 Roger Altounyan as a boy

Sadly there is no sign of the original Swallow bought at the same time as Mavis by Arthur Ransome and Ernest Altounyan in Barrow-in-Furness, and later sailed by the Ransomes on Windermere.  Mavis was later re-named Amazon by Brigit Altounyan, the youngest of the five Altounyan children, known as The Ship’s Baby.

Brigit Altounyan as a girl

Brigit married, becoming known as Brigit Sanders and later became President of The Arthur Ransome Society. The original lugsail dinghy Mavis or Amazon can be visited in the Coniston Museum in Cumbria. To read more please click here to see this previous post.

Dr Ernest Altounyan on Coniston Water with ‘Mavis’, one of the dinghies that inspired ‘Swallows and Amazons’

These unique photographs were recently found in Cheshire by the antiques dealer John Jukes who asked me if I could return them to the Altounyan family. This I have done and show them here by kind permission of Roger’s daughter, Barbara Altounyan. Please do not copy these photos.