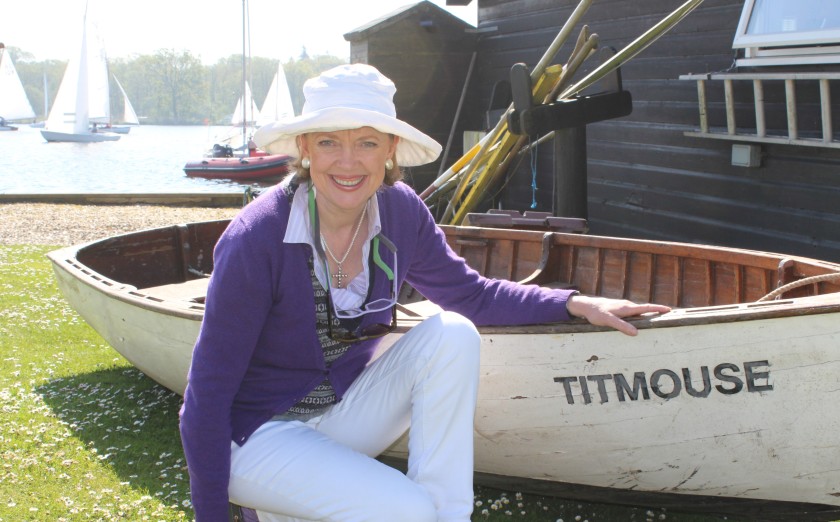 ~Sophie Neville with the star of ‘Coot Club’~

I was invited to talk about making the BBC TV classic serial ‘Coot Club’ and ‘The Big Six’ at the Norfolk Broads Yacht Club to help celebrate their 80th Anniversary. Titmouse, then 1930s dinghy owned by Hunter’s Yard had been brought down from Ludham for the occasion. 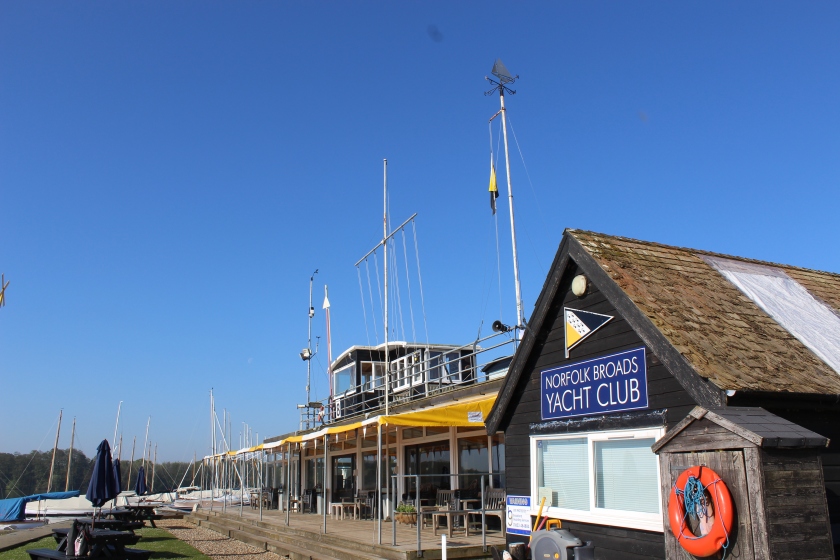 The bonus was that I was able to go sailing in one of the classic boats gathered at the club for their Open Day. 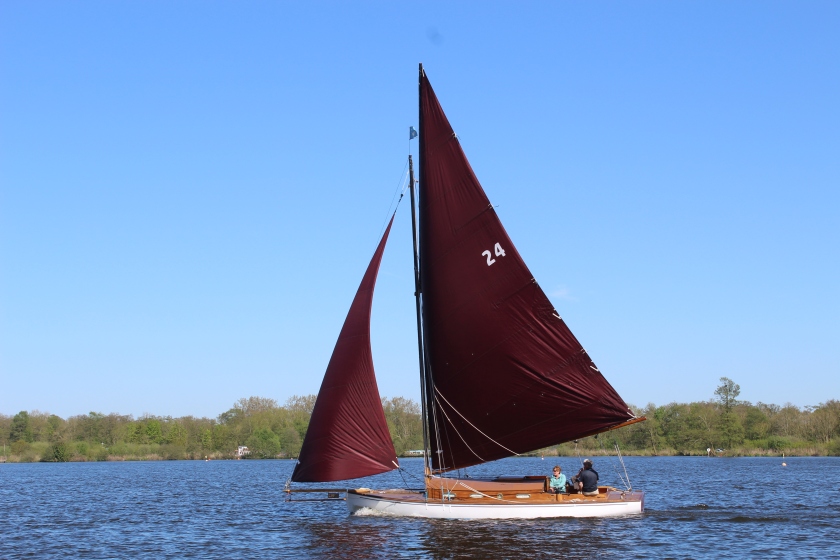 Geoff and Rose Angell kindly took me out on Pippa, their beautiful yacht with brown sails that appeared in ‘The Big Six’. I am sure Arthur Ransome would have loved her.

I’d spent nine months working with the BBC production back in 1983 when it had been my job to cast the children and teenagers who appear in the drama, many of whom needed genuine Norfolk accents.

We had been looking for young actors who could swim well and were able handle boats. We then spent three months filming in East Anglia when I looked after the children and helped rehearse their lines. I set up this shot for the cover of the Puffin paperback that accompanied the series. 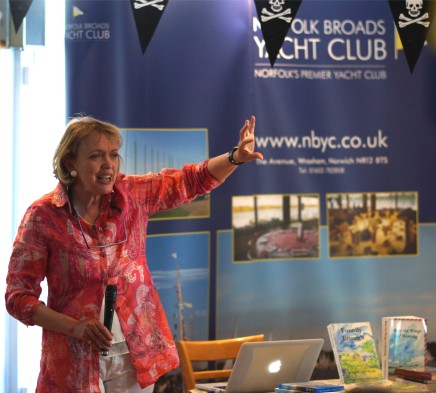 At a forum organised after my talk, Pat Simpson from Stalham Yacht Services explained how he found one of the stars of the series – an old lifeboat suitable to play the Death and Glory. She had been brought from where she is kept at Belaugh for the evening. You can see more photographs of her in the previous blog post here.

Pat provided a number of other vessels for the series including Buttercup and support boats such as the safely boat, a large modern cruiser used as a school room along with another for the costume and make up personnel. He explained that this came as a god-send as boat rentals had not been good that summer. Working on the series was harder than he imagined, ‘We once had to take a boat from Regan to Horning Hall overnight’ but he was pleased that ‘after three months of concentrated work, we got it all done.’ 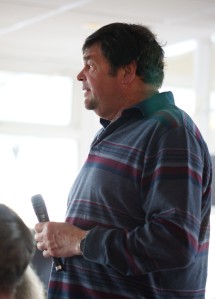 Robin Richardson, who co-owned Pippa back in 1983, explained how the shot of her being cast adrift was achieved. This wasn’t as easy as first thought as even when Simon Hawes, who was playing George Owdon, flung her stem line on the deck, a gentle breeze was blowing her back against the staithe. ‘Pippa didn’t want to go anywhere’. Robin had to stage the action by throwing out a mud anchor, climbing under her awning and pulling on the line to create the effect of a boat drifting out of control into potential danger. Pippa’s white canvas cover is pulled back here, but you can imagine the scene.

He was on location when Henry Dimbleby, who played Tom Dudgeon, was attempting to tow the Teasel under Potter Heigham bridge. He was rowing Titmouse, pulling hard on the aors but nothing was happening. ‘Stop for lunch,’ Robin advised the director, ‘and the tide will turn.’ This they did, and Henry we able to row under the bridge, towing the Teasel quite easily. Hunter’s Yard, who own Lullaby, who played the Teasle, could not bring her down for the weekend as she had been leased out with other boats, but they sent her transom, painted with her stage name. 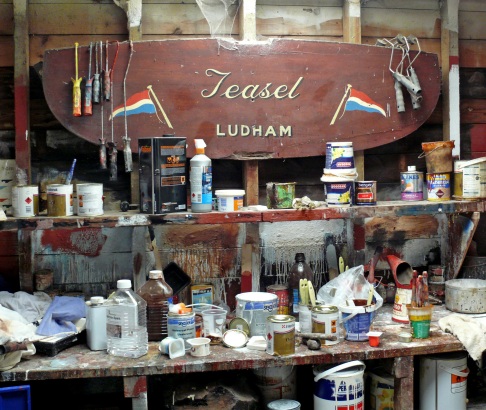 Robin Richardson owns the ‘Slipstream’ class dinghy called Spindrift who played Shooting Star in the serial. She was built by her father but couldn’t be with us as they were not able to complete her winter maintenance in time but Richard Hattersley said she came tenth in this year’s Three Rivers race when only 15 of the 98 entries actually finished. It’s a 24 hour endurance challenge, which they completed despite light winds. He sent me this shot, ‘of her battling it out with much larger Thames A Raters.’

I was shown a wonderful black and white photograph of the vessel used to play the Cachalot. She was skippered in the series by the film actor Sam Kelly in the role of the unnamed pike fishermen who the Death and Glory boys simply called ‘Sir’. She is seen here with John Boswell, her real owner who has sadly passed away. His son, the artist Patrick Boswell, brought along an album of behind-the-scenes photos.

The theme of the weekend was ‘Boats of the 1930s’. I explained how Swallow, the dinghy used in the original film ‘Swallows and Amazons’ originally came from Burnham-on-Sea where she was made by W. King and Sons to be used as a run-a-round boat. She was stabilised by a keel that ran the length of the hull, as Ransome described. It makes her rather difficult to turn. You can sail her today and is in the Lake District right now. Please see Sailransome for details.

There was quite a bit of interest in memorabilia from the original movie ‘Swallows and Amazons’. I bought along the white elephant flag captured from Captain Flint’s houseboat in the 1974 film, which was approved by a young Amazon pirate.

After a celebratory dinner, David and Nicky Talbot invited me to spend the night in the comfortable for’ard cabin of Kingfisher, a 1970’s motor yacht moored at the club.

I woke early on the Sunday morning to find mist hanging above the water as the sun was rising on what proved to be another sunny day with a fair wind for sailing.

After breakfast aboard, I was invited out in the 1930s river cruiser ‘Water Rail’, who had also appeared in the serial. We took her down the River Bure to her mooring in Horning where she is still part of the scene.

It was wonderful to be out on the waterways of Norfolk, passing traditional buildings. This was a stretch of river never featured in the television drama as Rosemary Leach, who played Mrs Barrable, took Dick and Dorothea from Wroxham to Horning in a trap pulled by Rufus the pony. One reason for this was that in 1983 we had to use the North Norfolk Steam Railway, since Wroxham Station had been modernised but Joe Waters, the producer, said he wanted to add variety by featuring a pony rather than a motorboat.

We encountered a number of period cruisers, although Janca, who we used to play the Hullabaloos’ Margoletta, sadly could not be with us, as she is still under repair.

However, by motoring into Horning ourselves, we passed The Swan Inn and Horning Staithe where a number of scenes had been shot, including some that featured Julian Fellowes and Sarah Crowden, playing the hated Hullabaloos. You can see photographs of them in an earlier post here.

Another vessel that interested me was a river launch that reminded me of the 1901 steamboat Daffodil, which I renovated with my father in 1978. I have photographs of her here.

You can read more about the traditional boats used in the series by clicking here.

Gerry Spiller, has written from Woodbridge in Suffolk, to say that she has found an oar labelled TITMOUSE, bought at a boat jumble. Could this date from the early 1930? Does anyone have the pair?

The DVD of the serial is now available on a re-mastered DVD, available from Amazon here