~Sophie Neville with the yacht ‘Goldfish’ sailing on Wroxham Broad~

Last weekend, I travelled up to Wroxham with my camera and memory stick for the Norfolk Broads Yacht Club’s Open Day. They were celebrating life on the Broads in the 1930s, along with the books by Arthur Ransome’s that are set in East Anglia.

We were blessed by such glorious weather that almost everybody seemed to be sailing when I arrived. 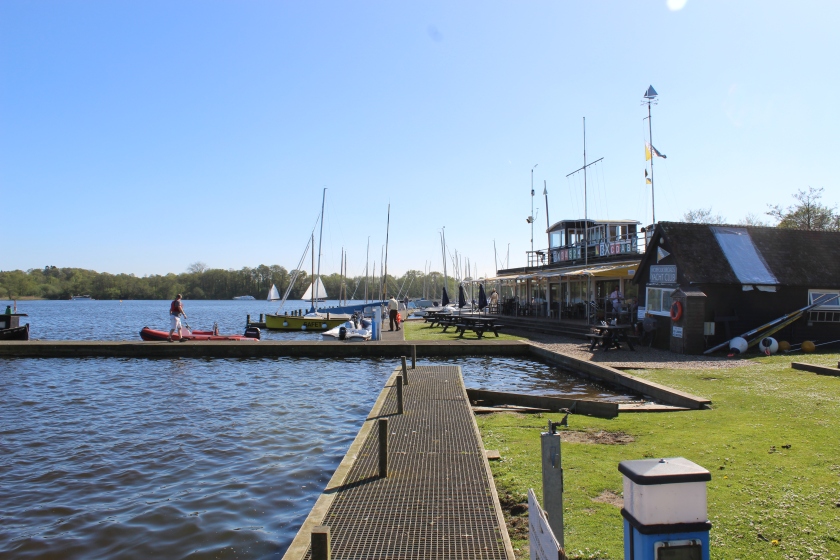 A number of vessels that appeared in the BBC TV adaptations of ‘Coot Club’ and ‘The Big Six’ entitled ‘Swallows and Amazons Forever!’ were on display at the club, including Titmouse, the dinghy belonging to Tom Dudgeon in the story, that normally resides at Hunter’s Yard in Norfolk. She is no longer seaworthy.

Tom’s punt, the Dreadnaught was pulled up alongside an elegant Edwardian skiff called Joan B that was once set adrift at Horning by George Owden. She had been brought along by Pat Simpson, a member of the Norfolk Broads Yacht Club.

Pippa, a classic broads river-cruiser with dark sails belonging to Geoff and Rose Angell, was cast adrift at Horning in the dark of night. She came to no harm and was now out on the water, racing against a 1904 yacht with white sails, number 4, called Swallow.

‘White Boats’ or ‘Yare and Bure one-designs’ originally brought out in 1908, were also  racing as they have been since the Farland twins, Port and Starboard, crewed for their father in ‘Coot Club’. Ransome refereed to a white boat called Grizzled Skipper who belonged to Chris Shallcross, but no one could remember which of the 140-odd White Boats registered was used in the series. Many members of this class of 20 foot half-deckers are named after moths or butterflies. You can see a fleet of White Boats here racing at Horning, the Swan Inn in the background: 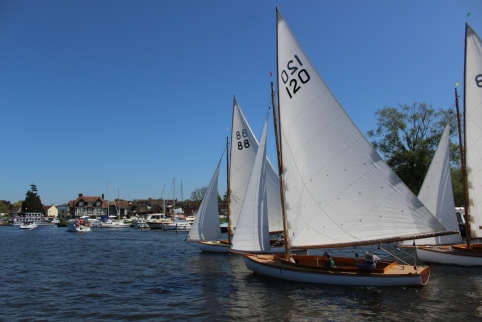 I spotted ‘Brown Boats’, a Broads’ one-design with a distinctive counter stern and spoon bow, which would also have been seen racing in the 1930s. They were first built in 1907 and although a few were lost during the war there are still 88 in existence, although some now have fibre glass hulls. Number 61, called Hanser, is owned by Danny Tyrrell.

Lullaby, who played the Teasel in the series, was up at Horsey Mere with other from her fleet but we had her costume on display. It is a varnished transom painted with the name Teasel. Janca, the motorboat who played the infamous Margoletta, hired by the Hullabaloos, was unable to come as she is currently being renovated, but Water Rail, a Herbert Woods Delight Class B 1930s cruiser belonging to Liz Goodyear was safely moored alongside other classic boats. She appeared in the back ground of several scenes in the television drama. 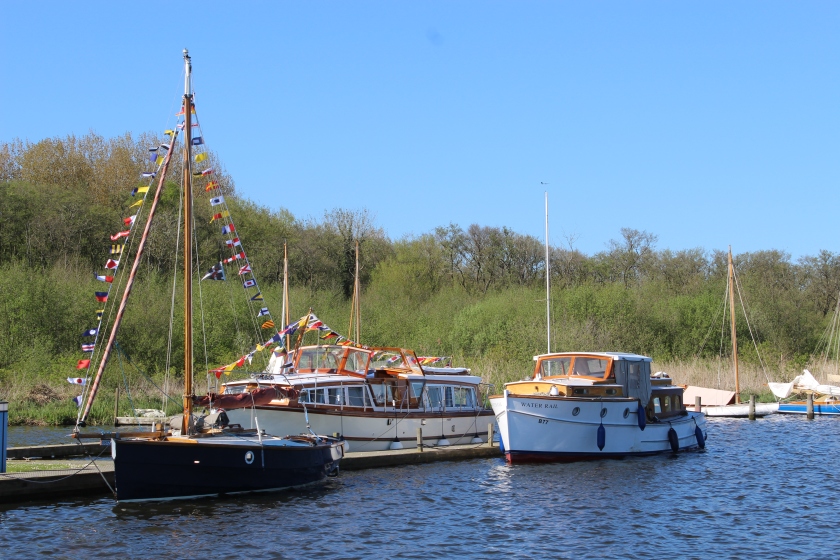 I then spotted a distinctive burgee that took me back thirty-five years: 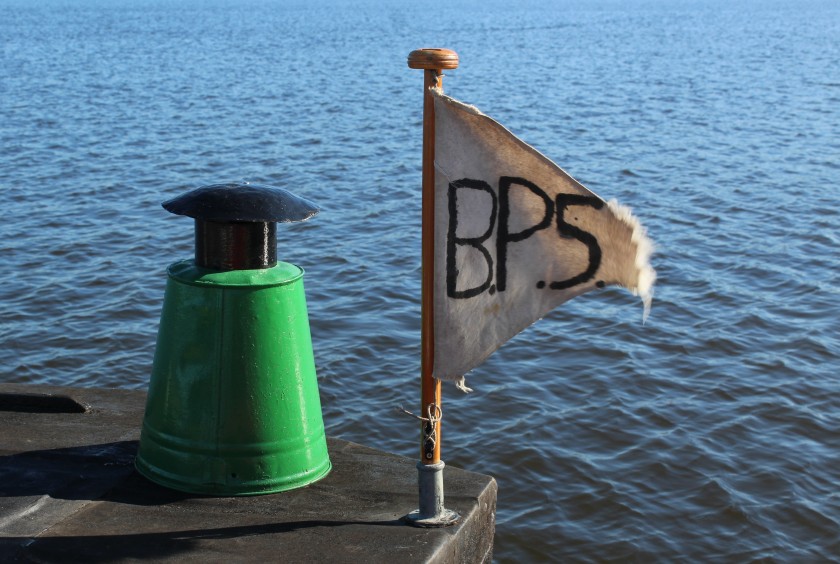 Bird Preservation Society – it was the flag belonging to the Death and Glory, flying next to ‘the little old chimney’ made from a galvanised bucket. 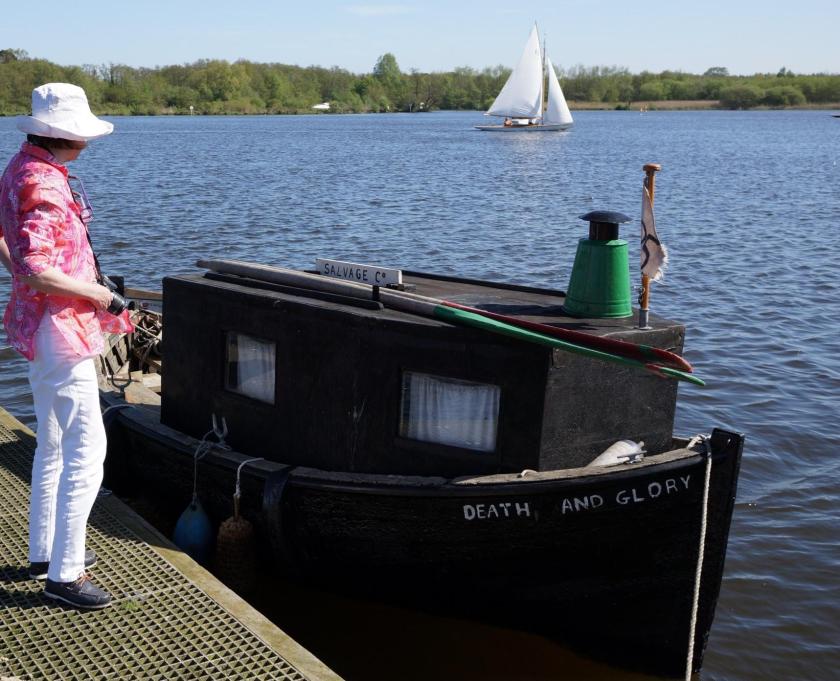 Originally a German lifeboat washed up on the beach at Southwold, she had been bought for the series by Pat Simpson of Stalham Yacht Services, who found her moored at Snape in Suffolk. 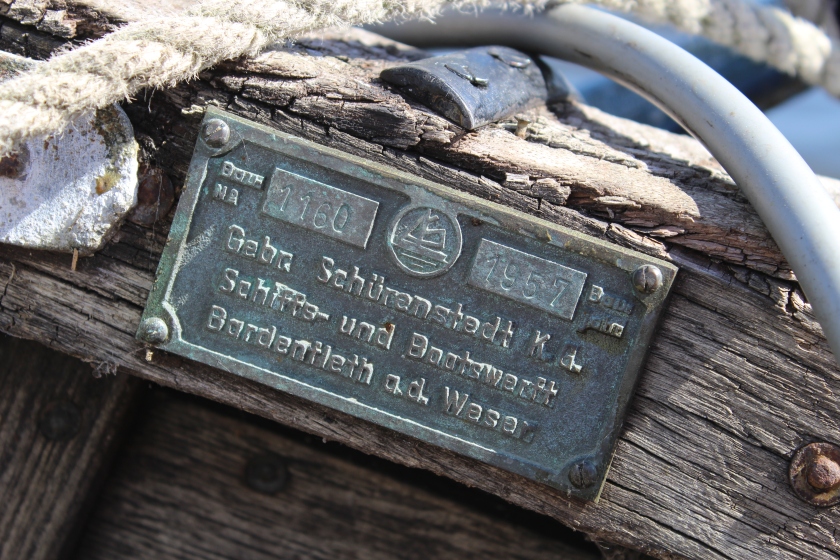 Pat kept her for his sons to take out on the Norfolk Broads and it has been operated by children as Death and Glory, ever since.

It must have taken a bit of work to make her sea-worthy but tarred and fitted-out correctly, she closely resembles Arthur Ransome’s illustrations, the homemade cabin mysteriously larger inside than out.

I was asked to sign a copy of ‘The Big Six’ bought along by Professor John Farrington from Aberdean, who acquired the Death and Glory for his own children in 1989.

‘I took them to the boatyard and suggested they climbed aboard. “Get on!” ‘They were aged ten and eleven.’

‘”But what about the owners?” they asked.’

“You are the owners,” I told them.’ He had just bought it for them as an unexpected present. ‘Before long they rowed it from Stalham to Sutton and back.’ 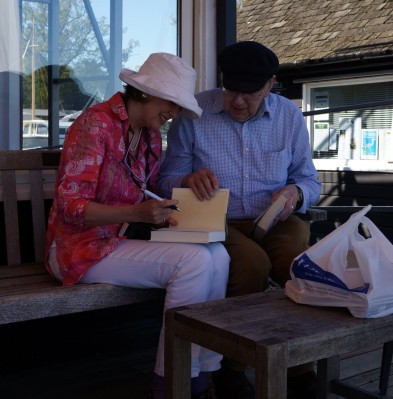 This year is the 80th Anniversary of The Norfolk Broads Yacht Club, which is why they have a 1930’s theme running through their calendar. The day proved a true celebration of traditional boats that would have been seen back then.

I had been asked to give a talk about filming the series, which I will relate in my next blog post. The re-mastered DVD, for which I wrote the DVD extras, is available on Amazon here:

Do add any information about these boats or ask questions about making the book adaptions in the comments below.