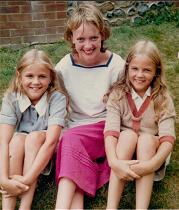 All the children who appeared in the BBC serial of  Arthur Ransome’s books ‘Coot Club’ and ‘The Big Six’ were delightful. They were committed to the project and focused on their roles in the drama that was released in 1984 under the strand title Swallows and Amazons Forever!

They enjoyed the process of putting the story together but we were filming on location in Norfolk for three months, which is a long stretch for anyone. It is a very long time when you are aged thirteen.

It can be difficult hanging around on set, waiting for the crew to set up, especially when you have to keep quiet and reasonably still, avoiding the perils of sunburn and scratches. In many ways it’s the most challenging aspect of being an actor, especially when you are constricted by your costume that has to be kept clean and dry.

Watching the film crew record a scene was interesting, and in many ways good work experience, but it was not always possible as they were often out on the water.

Once the school summer holidays started, we bid farewell to Angela Scott who had given the children lessons while they were on location. She’d been teaching them on a boat most of the time – the blue fibre glass cruiser in the photograph above.  It was part of my job to make sure the children rested and were quietly entertained when they weren’t in front of the camera. I thought it important to let them be themselves and build friendships.

I was very strict – I had to be when we were near water or traffic, but the girls were naturally self-disciplined and boys team spirited.

Joe Waters, who was producing the drama, said that the sun always shone for him. It certainly did. The summer of 1983 was scorching. We had a few rainy days, but the actors where wonderful at helping to keep up moral. The boys adored Sam Kelly, Captain of the Catchalot, who the British public knew so well from his role as Bunny Warren in Porridge and the German Officer in the WWII sit-com ‘Allo ‘Allo. We only had to look his way and we’d all collapse laughing. Sam Kelly is probably now best known for his recent roles in Nanny McPhee and the Big Bang , in which he played Maggie Smith’s husband Mr Docherty, and for taking the role of Grandad in the new Mike Leigh comedy  A Running Jump, 2012 but on that far off summer on the Norfolk Broads there were quite a few terrible take-offs of  Captain Geering’s German accent. One of his later episodes of ‘Allo ‘Allo was titled ‘Up the Crick Without a Piddle’   which aptly described that particular day in East Anglia.

Sam Kelly playing Captain of the Catchalot with Jake Coppard

In the end it was the boys who kept us amused. They were inventive and used whatever they could find and whatever opportunity came along to make me laugh.

You can read more about the making of Coot Club and The Big Six in the DVD extras of this 30th Anniversary edition.