I am assured that Titty’s family will not be offended if I re-publish these news clippings. She has become well-loved by many who I know would like to learn more about her. The Times used her Christian name of Mavis, but she was always known as Titty. 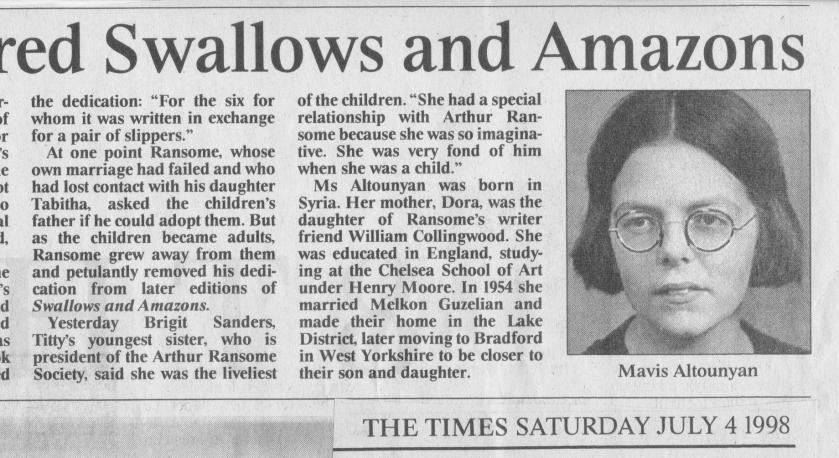 Although she was heralded as Arthur Ransome’s muse, I know that Titty Altounyan had no wish to be famous. If anything she gradually disassociated herself with the character in the books, who struck her as being so good and clever. But Titty was her name.

It was a name I have lived with too, for I played the part of Titty in the film of Swallows & Amazons produced by Richard Pilbrow in 1973. Children and adults alike still call me Titty all these years later. One summer, when I was sailing Swallow, the dinghy used in the 1974 film, someone took this shot of me. It is as if I am still flying Titty’s inspirational flag, which I do with humility and with honour. 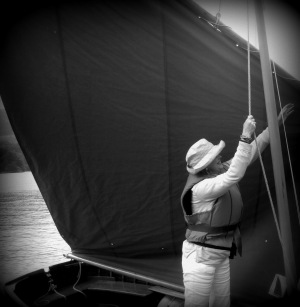 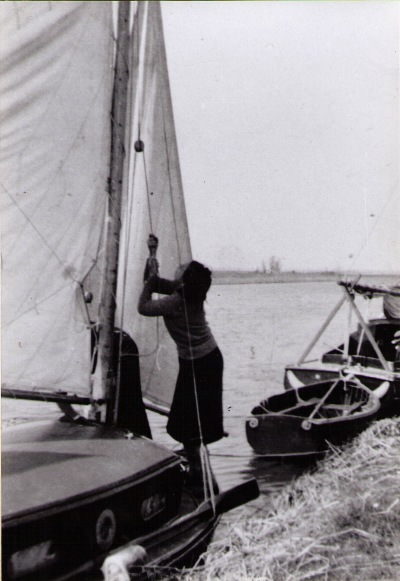 Titty Altounyan with the Ransome’s flotilla on the Norfolk Broads in 1934 (?)

Mrs Ransome wrote to Titty’s mother, Dora Altounyan, from Wroxham. This postcard was kindly shown to us by Ted Alexander who rescued it from certain destruction.

I thought I was far too fair to play Titty but Mrs Ransome approved.  Despite Ransome’s book illustrations of girls with dark hair, she was most decisive about casting “An English rose” to play Titty and that the children should have British colouring. The idea was that viewers could easily associate with us. I am of Scots/English/Irish heritage, like three of Titty’s  grandmothers, but have no Armenian blood. I rather wish I did. It’s nuisance having such fair skin. My second name is Rose.

I don’t know if Titty ever saw the 1974 film of ‘Swallows and Amazons’. She might have done. I only hope that we captured the sense of adventure experienced by the Altounyans when they were little and went camping on Peel Island during the weeks when they stayed with their grandparents, Mr and Mrs WG Collingwood, at Lane Head at the northern end of  Coniston Water.

Although they are seen wearing shorts as young children I have been told that the Altounyan girls sailed in dresses, which they tucked up into their knickers if they had to wade ashore, much as I did in the film. 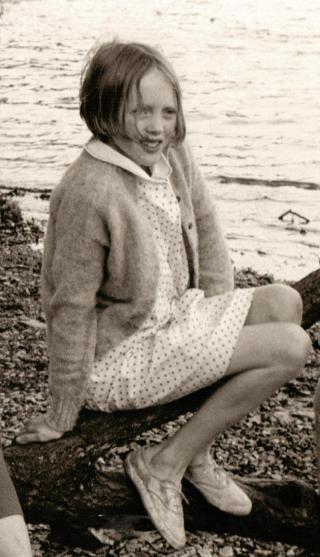 The reference to Titty’s name coming from the tale of Mrs Tittlemouse in the article feature in The Times above is incorrect. Titty’s name was based on a character in fairy story Titty Mouse and Tatty Mouse by Joseph Jacobs published in 1890, that begins when Titty Mouse and Tatty Mouse go leasing (or gathering) corn. Here is a later edition. Titty ‘never could resist anything in print.’

You can read the original story here 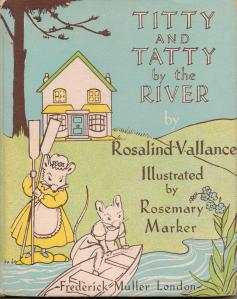 A version of the story published in 1949

With thanks to Roger Wardale who showed me the handwritten letters that Titty sent him. She had the most beautiful writing.

If you would like to read more about the amazing time I had playing Titty in Swallows and Amazons, the first section can be leafed through, free of charge here: