On Saturday 13th May members of the Nancy Blackett Trust hosted an Arthur Ransome Jamboree at Pin Mill in Suffolk.

Although Ransome is remembered for his ‘Swallows and Amazons’ books set in the Lake District, he moved to the east coast of Suffolk in 1935 where he set a number of other books in the series. 2017 makes the 80th anniversary of the publication of his inspirational sailing book ‘We Didn’t Mean to Go to Sea’. 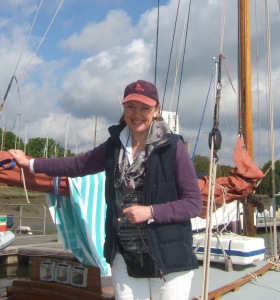 You can actually go aboard the Goblin, since she was modelled on his own favourite little yacht, the Nancy Blackett. I joined her at The Royal Harwich Yacht Club where she was moored alongside Peter Duck one of his other much-loved yachts, named after the book he wrote that begins in Lowestoft. I met up with Octavia Pollock, a feature writer from Country Life, and walked down the riverside to enjoy supper at the Butt and Oyster in Pin Mill where Ransome himself often ate.

Soon after leaving university, I worked behind the camera on the BBC TV adaptations of ‘Coot Club’ and ‘The Big Six’, Ransome’s two books set on the Norfolk Broads. The Coots also visit Beccles in Suffolk.

It was the Swallows who made it to Pin Mill and Ransome set his novel ‘Secret Water’ in the Walton Backwaters nearby. I first went there when The Arthur Ransome Society asked me to give a talk about making this BBC TV serial entitled, ‘Swallows and Amazons Forever!’. I gave another talk about the cast and signed copies of ‘The Making of SWALLOWS and AMAZONS – 1974’. 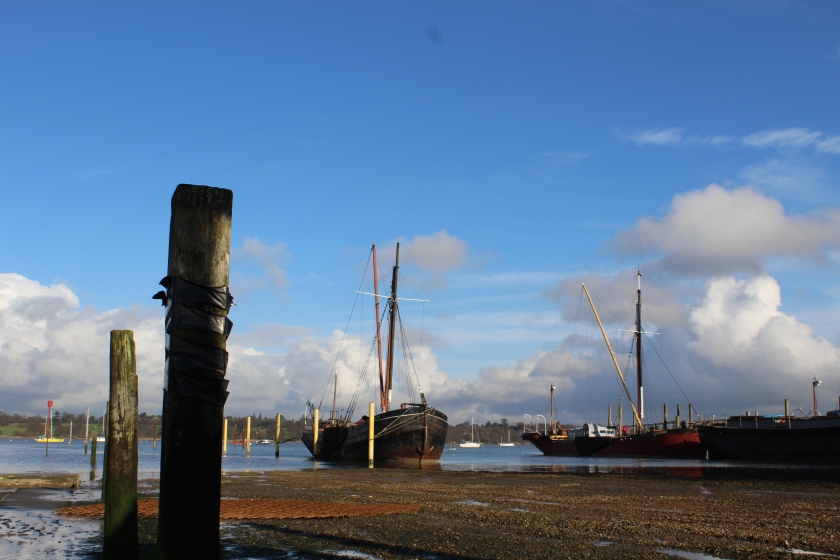 ~The Orwell at Low tide~ 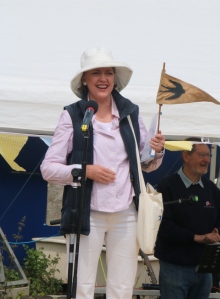 This VisitEngland event was great fun. There was a geo-caching route along the footpath from Shotley to Pin Mill. Marine artists Claudia Myatt and Christine Bryant hosted drop-in sessions on the riverside where visitors could also find the Rabble Chorus singing.

There was an outdoor installation of old Pin Mill images enabling you to look back in time. These were taken by Arthur Ransome himself of the building of his boat Selina King at King’s boatyard nearby. It was the first public exhibition of these pictures ever seen and was appreciate by the hundreds of visitors who turned up. 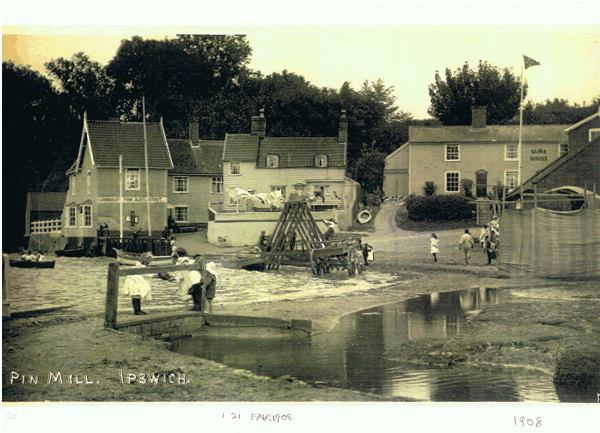 The Pin Mill Studio also hosted an exhibition of photographs from the restoration of Melissa, a barge restored to her former glory by Webb’s boatyard, with additional archive images of Pin Mill from the early 1900’s.

~The Nancy Blackett in her 85th year~

A Pin Mill ‘Wooden Boat’ race was held along the stream leading down to the river and you could take a ride on the Victorian swing boats on the Common as in years gone by. There was a ‘pirates and seafarers’ fancy dress competition for children and an Arthur Ransome lookalike competition (pipe and moustache) along with stalls and sideshows from local groups, charities and organisations.

Live music, including shanties from Pin Mill favourites, High Water Mark and a performance of We Didn’t Mean to go to Sea by pupils from Holbrook Academy who entertained visitors while cream teas, a barbecue and refreshments were served at the Butt and Oyster and Pin Mill Sailing Club.

T-shirts celebrating this special anniversary were sold along with gifts to generate funds for The Nancy Blackett Trust, who celebrate their 20th anniversary this year.

Do let us know if you came along by leaving a comment!