Skip to content
Nancy Blackett, the 28 foot cutter that Arthur Ransome bought with Spanish gold, as he called his royalties from ‘Swallows and Amazons’, is an old lady now. Built by Hillyards of Littlehampton in 1931, she turns eighty-five this year and yet looks pristine. If you ever wanted to sail the Goblin in ‘We Did Mean To Go To Sea’ you must know that it was Nancy who took this starring role in Ransome’s novel, first published eighty years ago.
I arrived in the Netherlands this summer to find Nancy receiving visitors at a nautical festival in Midddleburg, while a jazz band played on the quay.  She was moored by a lifting bridge in the centre of town, neatly rigged and ready for anything. After taking a look at a number of old gaffers, her crew enjoyed a cold beer and walked down the canal to vittel-up at a supermarket before having dinner in what was once a packing house for silks and spices imported from the East Indies.
As the swing bridge rose the next morning, we made way and motored down the wide canal to Veere, mooring up by the grassy port bank.
After being granted permission to go ashore, I passed the historic town well and walked down lanes bordered by hollyhocks to visit the museums of this ancient port. They house a number of charts and medieval maps that would have delighted the Swallows, along with old photographs of Dutch natives in traditional dress. I was tempted to buy a pair of clogs to take home for Bridget.
We left Veere to explore the islands and creeks of the Veersemeer before sailing down-channel and through a modern lock into the Oosterschelde estuary formed by the River Scheldt. It was once an important shipping route that bought wealth to the Netherlands but is quieter now. I spotted a seal and watched a cormorant swallow a large eel, that wriggled and jiggled inside its gullet.
After negotiating the impressive Zeelandbrug that spans the delta, we sailed down to Zierikzee where you can climb the church tower, if you dare, and look out across the once fortified town. The windmills, ornate spires and ancient buildings help one to imagine what life must have been like in the 1500s when it became famous as a trading centre for salt and madder. I found scold’s stones and a whaler’s kayak from Greenland at the Stadhuis Museum in Zierikzee where Veronica Frenks was once the curator.
Our skipper, Ian McGlynn, wondered if we could sail back under an arch of the Zeelandbrug instead of waiting for one section of the road to lift. Built between 1963 and 1965 the Zeeland Bridge is more than five kilometres long and hardly comparable to the arch of Potter Heigham but Mate Judy Taylor didn’t want to take any risks. We had Nancy’s new mast to consider.
It was only on our last evening-but-one that rain hit us. We’d had blue skies and sunshine all week. As the salt water was washed away from Nancy’s portholes I opened the pages of ‘We Didn’t Mean To Go To Sea’ to find Ransome’s illustrations and read the final passages of the Swallows’ unplanned voyage to Holland. The book is eighty years old this year and yet moves me still. There is Nancy, portrayed as the Goblin moored up in a foreign port, which is where we left her to be enjoyed by other members of the Nancy Blackett Trust.
A marathon reading of ‘We Didn’t Mean To Go To Sea’ is planned, to celebrate the 80 year anniversary of its publication, at Pin Mill Sailing Club on the Orwell in Suffolk on Saturday 21st October 2017.

To read more about Nancy or join the Nancy Blackett Trust please click here
Nancy has been featured by Country Life in a July issue you can read here
. 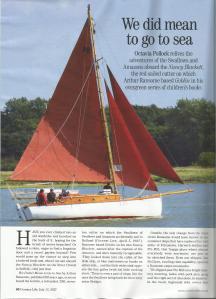