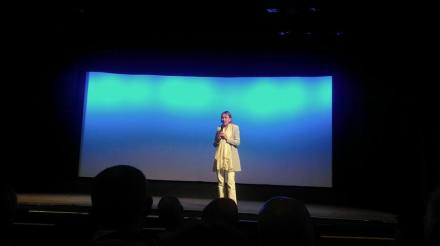 The screening of Swallows & Amazons on Sunday was sold out. 250 tickets. They were endlessly turning people away. ‘We should have shown it again in the 6.00pm slot,’ I told the manager. ‘Oh, we have American Snipper on then.’ It stars Bradley Cooper and Sienna Miller. ‘How many have booked to see it?’ ‘Three.’ 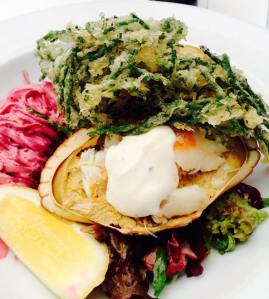 All age groups were represented in the audience who came to the event – a fundraiser in aid of the Nancy Blackett Trust. About 70% had seen the film of Swallows & Amazons before. Some knew it well.

Swallow, the clinker built dinghy, originally built by William King and Sons at Burnham-on-Crouch and used in the 1974 film, was rigged up outside the cinema for everyone to meet. She is going to be at a number of The Arthur Ransome Society’s events in Suffolk and Essex this summer. We used the best photo of Swallow under sail for the cover of the paperback on how the film was made, which was on display in the cinema lobby after the film. It is now available online or from the Aldebrugh Bookshop in Suffolk. 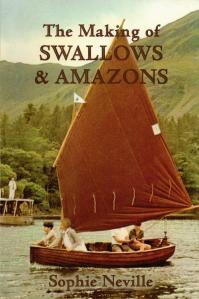 Someone asked if we had any disasters while making the film.

‘Swallow’s mast broke, we nearly sailed under the Windermere steamer and we were often rained off,’ but I couldn’t think of anything utterly disastrous from my perspective. I’ll have to ask Richard Pilbrow who produced the film back in 1973. I can list other questions asked by the audience in the next post. Do add any you might have to the comments box below.

The Riverside Cinema in Woodbridge are thinking of showing Swallows & Amazons again in September to help them celebrate their centenary ~ ‘100 Years of Film’. Do add a comment in the box below if you would like to organise a screening of the film at a cinema near you.

4 thoughts on “Sophie in Suffolk ~”