Hill Top, the 17th century farmhouse at Ealingsheath, a tiny hamlet near Haverthwaite in Cumbria, where Arthur and Evgenia Ransome lived in the 1960s enjoys lovely view across the Lakeland fells.

In the Epilogue to Arthur Ransome’s autobiography, Rupert Hart-Davis wrote: ‘In 1960 the Ransomes bought the little derelict farmhouse in the Lakes which they had rented for the last four years as a holiday cottage. Repairs and alternations took longer than expected, and it was not until November 1963 that they moved into their home, Hill Top, Haverthwaite, near Newby Bridge. They both loved the house, and the buzzards, redstarts and deer by which it seemed to be surrounded… ‘ Arthur Ransome celebrated his eightieth birthday there, although by then ‘…he was confined to a wheel chair on the upper floor of the house.’

The present owners, Stephen and Janine Sykes, who bought Hill Top in 2012, have converted the garage/barn-end into a holiday cottage. You can read about the story in the Mail Online entitled: ‘A home full of Swallows & Amazons…’ As they say, it’s a good base for exploring the locations described in book and used in the 1974 movie of ‘Swallows and Amazons’, which the Mail describes as, ‘A perfect adventure.’ I’ve described doing so myself in previous posts.

Please click here for feature article in the Mail on Sunday, which was published in their travel section.

Stephen Sykes says, ‘The picture used was actually of “The Pavilion” – a games room.’ It was converted from a substantial former kennel.
.

.
‘We demolished another kennel of 1,000sf (now a courtyard garden) and we’re just finishing the conversion of another to an office/store room! We’ve spent a lot of time, effort and money in “de-kennelling” Hill Top and returning it to domestic use! Needless to say, the guest accommodation, “The Cottage at Hill Top”, forms a self-contained part of Hill Top itself.’
.

.
Stephen added, ‘Cumbria Life are coming to photograph Hill Top today for a feature in their Christmas issue.’ The house certainly looks wonderful.
.

.
Stephen and Janine are more than happy to take direct bookings – please ring: 01539 531 452. The last three digits of their phone number are the same as in Ransome’s time.  They offer a 10% discount to TARS members.
. 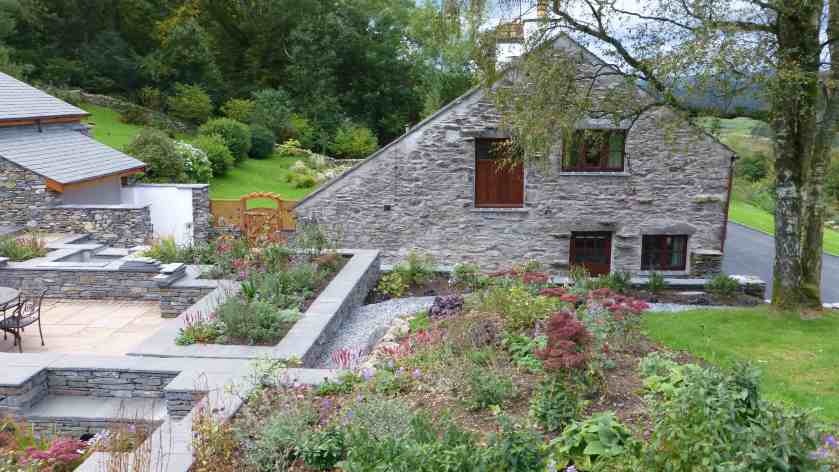 .
Stephen Sykes is an investment analyst and author of The Last Witness who studied astrophysics at UCL in the days when men were landing on the moon.  He previously wrote to tell me that they have a number of old photographs and, ‘… a collection of most books by and about Arthur Ransome. Obviously, we’ve made it our job to learn much about the Ransomes and… visited the Brotherton Library at the University of Leeds to look through Arthur Ransome Collection where there are dozens of photographs of Hill Top from the late 1950s to c. 1963. I now have digital copies of most of these, including a number of good quality colour slides of Arthur and Evgenia. I guess it’s rather unusual for someone to find a treasure trove of photos of their house from half a century ago and see how its then famous owner transformed it!
.
‘Astonishingly, the Lake District National Park Authority indicated that they had absolutely no interest in the Ransome connection and even moaned that if Hill Top were to become a “tourist attraction” it would merely create traffic problems!’ Stephen added.
.
When I last passed Hill Top with Mountain Goat no one else was using the lane that runs in front of the house even though it is not so very far from the southern end of Lake Windermere and the Haverthwaite Railway Station where the steam train comes in and the Windermere steamers dock.
.

…………..
If you would like to read the ebook about the making of the original film of ‘Swallows and Amazons’, please click here.
There are also different versions of the paperback.

7 thoughts on “Hill Top, the house where Arthur Ransome once lived in Cumbria”