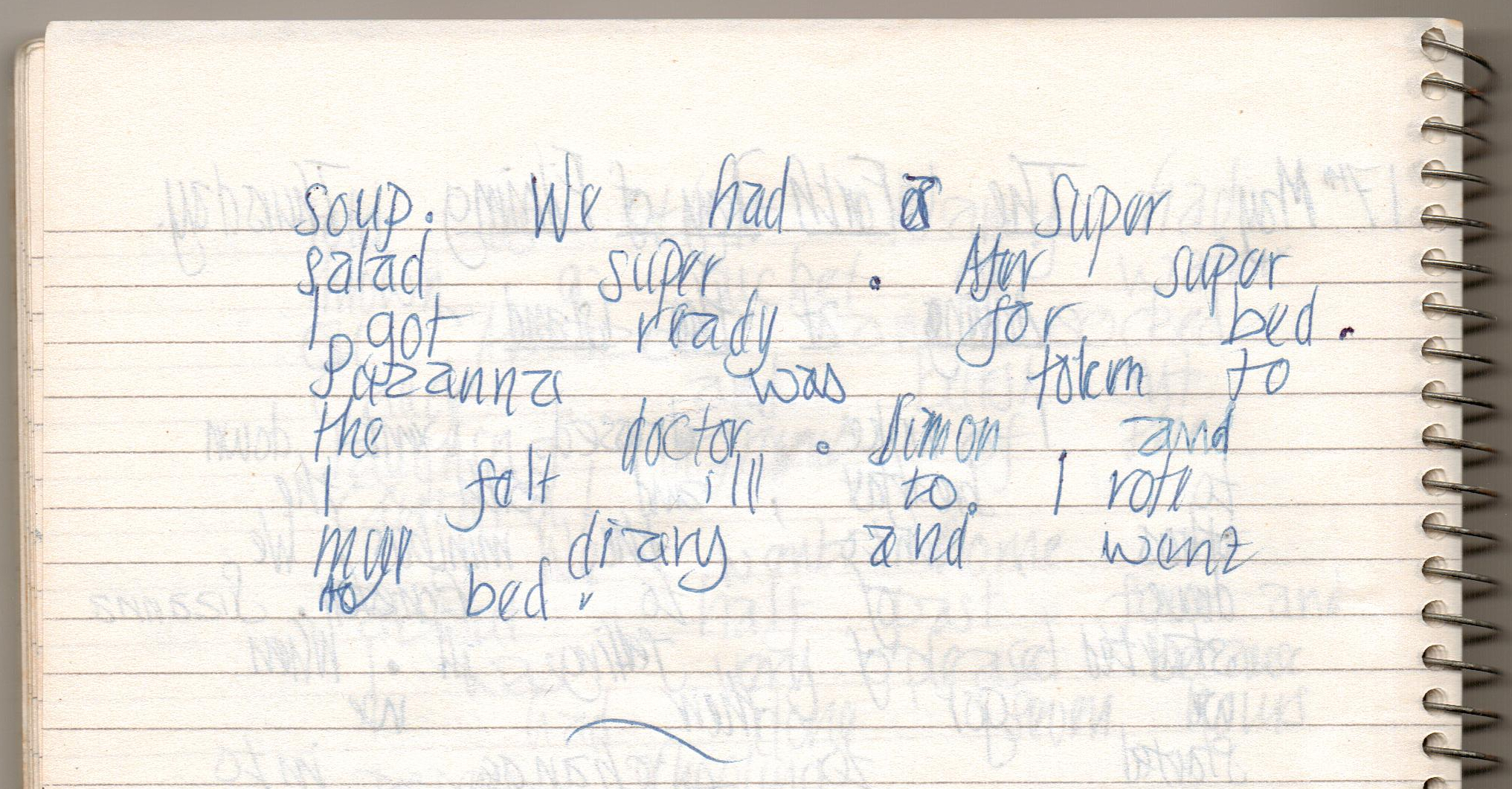 What would you wear to go sailing on Coniston Water in May?  Arriving at Wild Cat Island was exciting but I got terribly cold.

The crew took delight in referring to my navy blue gym knickers as ‘Passion Killers’. Claude Whatham had me tuck my dress up into them. I don’t know if he knew it but, as Arthur Ransome said, the real Altounyan girls had done this, since they usually wore dresses in the 1930s rather than shorts. It made me think that I was wearing even less and haunts me still. Even this year ! there was a photograph in The Telegraph of me with my dress tucked up into my knickers. I was never allowed to un-tuck it between takes for fear of spoiling continuity.

Emma Porteus, the Costume Designer on Swallows and Amazons was the one person we didn’t see much on location. I’d met her at a fitting in London, when I tried on the silk dress and the shoes I wore in the train. She then had my cotton frocks made up, seemly without a thought to the Cumbrian climate. The fact that they were rather short was in keeping with 1970’s fashion, rather than 1929. It was Claude who insisted that we all – boys and girls – wore original 1929 knickers and Mum who found us vests to wear once everyone realised how cold it was out on the water. I had to beg T

erry, the Wardrobe Master, to let me wear the grey cardigan in subsequent sailing scenes.

Emma Porteus must have either been expensive or busy or both. She became the designer on many of the Bond movies ~ Octopussy, A View to a Kill and the Living Daylights. She worked on Aliens with Sigourney Weaver, Judge Dredd with Sylvester Stallone and, guess what? –  1984, which starred Suzanna with none other than John Hurt and Richard Burton. This was partly made near my home in Gloucestershire ~ Mum visited the set at Hullaverton ~ at the time I was working on the Arthur Ransome book adaptations of  Coot Club and The Big Six on the Norfolk Broads. Of all the costumes worn in movies through the decades Suzanna wore a classic in this film: a workman’s boiler-suit. Not designated by Emma Porteus, of course, but by George Orwell. Nice and comfy though for wearing on location.

The terrible royal blue nylon track suits with go-faster stripes down the arms that we wore on location were purchased to keep us warm during rehearsals. This was a huge mistake, firstly because they were ineffective in terms of thermal insulation and secondly because they found their way into the publicity shots. Someone commented on this only last week. they even made their way onto the cover of the VHS.  I can remember thinking at the time that they were a misguided purchase (and please note I was aged twelve at the time) but so grateful were we for the meagre warmth we willingly put them on.

Dennis the DPO ~ Everyone on the crew was wrapped up warm and well equipped with wet weather gear.  They needed to be.  There was so much hanging around.  While it took a little time to line up a dinghy for a shot, Dennis Lewiston the Director of Photography was very strict about waiting for clouds to pass so that it looked sunshiny, even if it wasn’t that sunny in reality. This could take ages and ‘takes’ were often snatched between clouds. Looking back on it, this was crucial. My vision is of Dennis in a navy blue rain coat peering at the sky with a shaded eye glass that he wore habitually around his neck. He went on to make The Scarlet Pimpernel with Anthony Andrews, Jane Seymour, Ian McKellen and Julian Fellows,  The Rocky Horror Picture Show with Tim Curry, Susan Sarandon and Meat Loaf, The Country Girls, starring Sam Neill, Marilyn and Me, Heidi with Patricia Neal, Montana and numerous other TV movies.

Filming the filming ~  I did not know until I read Mum’s letter last night that John Noakes had been offered a part in Swallows and Amazons or that Blue Peter,  had been offered the chance to document the making of the film. I wonder if John Noakes ever knew this? Biddy Baxter, the editor, was keen on ‘behind the scenes’ items.  Lesley Judd had worn a lovely red dress to make one earlier, in February 1973, about Dad’s Army with Arthur Lowe and John le Mesurier, who happened to be a cousin of Dad’s. Instead my father bought 16mm stock for his company’s Bolex and shot a number of reels.  The footage was never sold but not forgotten. I found it in 2003 when the BBC included it in the Countryfile documentary presented by Ben Fogle that was re-issued as Big Screen Britain. Does anyone have a copy of either of these?  I am yet to see them properly. Notes on the Diary ~It looks as if the food had improved.We had turkey for lunch on location, which was a great treat in the early ’70s.and ‘a super salad supper’ at the guest house, which I evidently enjoyed. Does anyone remember such things being a real treat? Translation of my mother’s letter home:My Darlings ~ Dad and my sisters’Letter to SAJ’ ~ Sister Ann-Julian, my headmistress. She signed her name SAJ and everyone called her Saj. When my long hair was cut for the part of Titty we sent the pony-tail back to my form at school so they could thatch the cottages of a model village they were making of medieval Childry. I was really sad to be missing the project.   Toos ~ Mum’s nick-name for me, Ruth ~ our cleaner from the village who was helping to look after my sistersB…    ~ (no idea) Gertie ~ her enormous Irish mare& co ~ our moorland ponies, Lupy, Joshua and Blue ~ our dogs. She must have been a bit homesick.