Skip to content
Arthur Ransome first visited the Lake District as a tiny baby. He said that his father, ‘carried me up to the top of Coniston Old Man at such an early age that I think no younger human being can ever have been there.’  Thereafter the family traveled up by train every summer, from 1884 – 1897, to stay on the Swainson’s farm at High Nibthwaite at the southern end of Coniston Water.
. 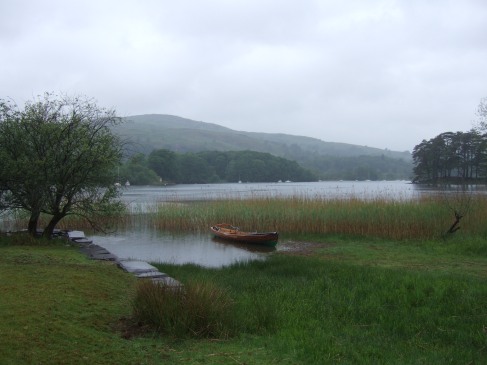 .
The four children were allowed to run wild in the hills or slide down the knickerbocker-breaker rocks above the farm whilst their mother painted and their father fished the River Crake. They had the use of a rowing boat, which they would take a mile up the lake to Peel Island for a picnic.
.
.
I’d love to take my family to spend a week at Low Water End, a holiday cottage at the southern tip of Coniston Water, which has boats, lake frontage and a small slipway.
.
Another lovely place to stay is Hill Top Farm, a traditional Lakeland house built in the 1700s and now owned by Martin Altounyan, son of Roger Altounyan and grandson of Dora Collingwood who was such a great friend of Arthur Ransome’s.  They say you can see the Crake estuary from the garden. It is near Penny Bridge village, four miles from Coniston Water and just three miles away from Hill Top at Haverthwaite where Arthur Ransome lived at the end of his life.
.
As a young man Ransome escaped from London for a holiday in Coniston village and found himself invited to stay nearby at Lanehead by WG Collingwood, Dora’s father. Ransome writes in his autobiography that  had originally meet the family in 1896 on Peel Island. ‘Mrs Collingwood told me that she remembered that meeting on the island and her surprise that my mother, who was a very pretty young woman, could have a family of such very ugly children.’
.
.
By 1904 Arthur Ransome was being taught to sail by Dora, Barbara, and Robin Collingwood in a heavy old dinghy called Swallow that they were able to take out on Coniston Water. He later  stayed at Low Yewdale at the north end of Coniston, which I believe still offers Bed and Breakfast or a self-catering cottage.  Ransome would set up ‘a tent on a small mound close to Yewdale Beck a hundred yards up the valley’ so that he could sleep outside when it was fine.  In her guide-book, In the Footsteps of the Swallows and Amazons Claire Kendall-Price shows you how you can walk from Low Yewdale to Ambleside via The Drunken Duck, a pub you can now stay at that I believe Ransome visited.
.
It is easy to see how all this experience, the houses Ransome loved and places he knew of since childhood were poured into his Swallows and Amazons series of books. You will have to tell me which of his stories were written here:
.

After many adventures in Russia and the Baltic, Arthur Ransome bought his second wife Evgenia to live at Low Ludderburn on Cartmell Fell above Windermere where they lived from 1925 until 1935.   He loved the work room made for him at the top of the grey barn outside. They moved to Suffolk for a while  but returned during WWII to live at The Heald, which overlooks Coniston Water.

It was here that Ransome wrote The Picts and The Martyrs. They had a jetty there where he kept his boat Coch-y-bonddhu, which is used as the model for the Scarab, a sailing dinghy bought for Dick and Dorothea Callum in the novel.

There are a number of books about the life of Arthur Ransome, not least his own autobiography published by Jonathan Cape from which I have quoted briefly here. I can recommend Arthur Ransome, Master Storyteller by Roger Wardale and The World of Arthur Ransome by Christina Hardyment – which has a photo of me on the cover.