Albatros Media in the Czech Republic have re-published a hardback edition of ‘Swallowdale’ by Arthur Ransome, illustrated by the great Czech artist Zdenek Burian. 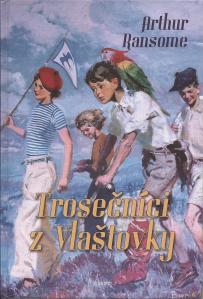 The forward has been written by me, Sophie Nevilleová.

I was commissioned by Ondřej Müller, Fiction Program Director, thanks to an introduction by Petr Korbel, a feature writer in Prague. My somewhat daunting task was to introduce the well-loved story that comes with classic illustrations.  I took the opportunity to recommend that readers book a holiday in Cumbria, which has been so badly hit by the recent floods. It’s always exciting to find the actual locations described in a novel, particularly one you know well.

Do tell any Czech friends or collectors of Ransome’s books about this publication. Click here for  the sales site.

Here is the English version of my contribution:

Of all Arthur Ransome’s books, it was Swallowdale that inspired me to go camping. I have since pitched my tent all over the world from Papua New Guinea in the Pacific to Patagonia, which I crossed on horseback. I once spent six months driving down through Africa, sleeping in a tent and using all I had learnt from this beautifully written book. Not long after this expedition, I started to draw maps in the hope that I that might encourage others to travel and explore the world as the Swallows did.

Back in 1973 I had the great privilege of playing the part of Titty in the movie of ‘Swallows & Amazons’ that has been translated into Czech twice. Throughout my life I have received letters from people telling me how Arthur Ransome’s books have given them direction in life, encouraging them to set sail and explore unchartered waters.

If you ever visit the English Lake District take the charcoal burners’ advice and keep a good lookout for adders but in searching for Swallowdale one thing is for sure, you will be walking in Arthur Ransome’s footsteps. He was taken to the summit of Old Man Coniston, the mountain known in the book as Kanchenjunga, as a small baby and rowed into the secret harbour of Peel Island, or Wild Cat Island as the Swallows called it, when he was a boy.

The people of Cumbria still welcome visitors, indeed you can stay at the farm known as Holly Howe and it is possible to take a boat out on the lake below it. Coniston Water is not an exact replica of the map in the book, but you can enjoy looking for Horseshoe Cove and the Amazon boathouse. Rio can be found on Windermere where you might also find the Peak of Darien along with native steamers. Titty would encourage you to let your imagination take you further and I am sure Roger would suggest you take a fishing rod.

Even if travelling does not appeal to you, ‘Swallowdale’ is such a vivid story that you will sail back in time to 1931 quite effortlessly. This classic book is a full of wonderful imagery from ‘black wretched thoughts…crowding in like cormorants coming to roost’, to potatoes being in bad mood. It is enjoyable on many levels. I laughed when Titty decided, ‘Miss Turner could hardly be dead if she was complaining of cold plates’ and was uplifted by her joy at discovering, ‘the most secret valley that ever there was in the world.’

I am so pleased that Albatros Media are able to bring you this beautifully illustrated edition, to read, enjoy and perhaps pass on to others.

Swallows and Amazons flags on the back cover