It could only happen to them. My parents decided to take a holiday looking at castles in Northumberland and came across this scene:

They ended up appearing in a Walt Disney movie called Unidentified Flying Oddball.  Here is the evidence:

The film’s original title had been The Spaceship and King Arthur, billed as a family adventure. It was an adaptation of A Connecticut Yankee in King Arthur’s Court and was shot at Alnwick Castle, the seat of the Duke of Northumberland where the Harry Potter films were later made.

It was released on an unsuspecting public in 1979, but was shot in the summer of 1978. I’m not sure how advanced Visual Effects were at the time but there were no Computer Generated Images. It looks to me as if this little airbourne stunt was for real. 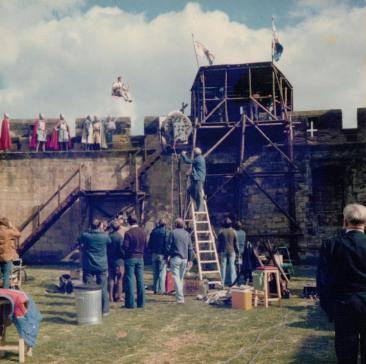 Life before the advent of CGI

Absolutely terrifying. While Kenneth Moore played King Arthur, Dad’s distant cousin John le Mesurier was Sir Gawain. Ron Moody played Merlin and Jim Dale starred as Sir Mordred with Dennis Dugan who played Tom Trimble. Rodney Bewes, who we knew as one of the Likely Lads had the role of Clarence. My father was hired for five days as a weapon bearer. This was simply so Mum had license to watch the filming.

Dennis Dugan on location in Northumberland

Pat Roach,  6’5″ tall British actor, later in all three Indiana Jones films, was Oaf. Mum hadn’t seen Jim Dale with permed hair before. She was used the lovable innocent he tended to play in Carry On films, but there he was looking fashionable on location in Northumberland, in the Duchess’s garden at that.

Jim Dale is known for the Harry Potter audiobooks in the USA, winning several high-profile awards for them, and for narrating the Harry Potter video games such as the Hogwart’s Challenge and Wizarding World. I wonder if they transported him back to Alnwick Castle?