A newspaper report has just arrived from Nantes in France, where we arrived on 30th August in our shallop, the Royal Thamesis and Serena, a sandolo belonging to our rowing club, City Barge. As I explained in my previous post, we’d been asked to lead a procession of historic boats into the city as feature of their jazz festival – an activity holiday with a difference. 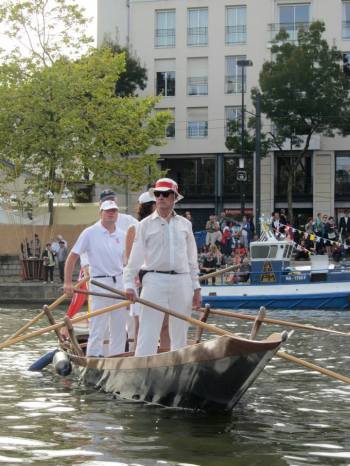 I’ve also been sent these photographs of the sandolo, showing our standing up oarsmen being applauded by the crowds. 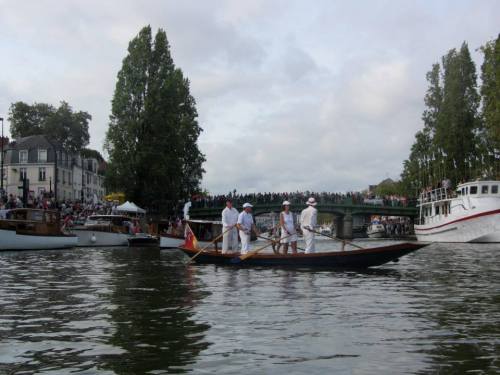 Although a couple of gondolas took part, accompanying us some way down the River Erdre, I don’t remember seeing them in Nantes.

There was certainly a huge variety of boats involved in the Rendez Vous de l’Erdre 2014. 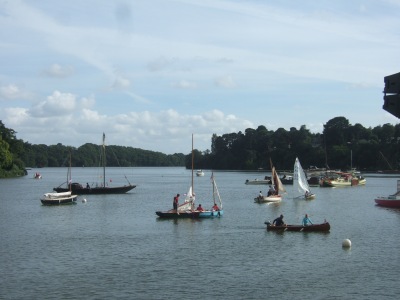 The 240 vessels taking part ranged from sleek period motorboats to a barge once used to transport cattle, which was now taking jazz musicians downriver.

I loved seeing the steam boats or bateaux vapeur, including Ursula who was flying the flag of the SBA or British Steam Boat Association we once belonged to as a family.

After mooring up in the basin at Nantes,

the Mayor of the city treated us all to the most fabulous reception at the Hotel de Ville.

We found that a feast awaited us.

Hungry sailors and oarsmen were rewarded for their efforts

with a variety of delicious things to eat

I am often asked what I get up to on holiday. We have just returned from Rendez-vous de l’Erdre in Brittany, when we rowed some forty-five kilometers down a tributary of the Loire, leading a procession of 240 traditional boats into Nantes. 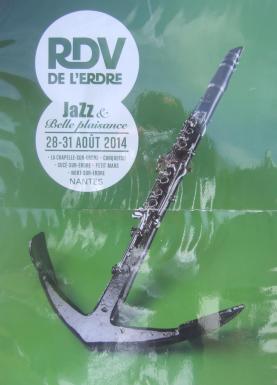 The journey started in Portsmouth, 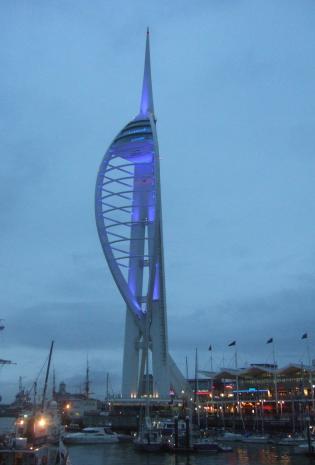 where the crew from our boat club, City Barge, gathered to load two boats onto the cross-channel ferry to Le Havre.

We took Serena, a Venetian sandalo and The Royal Thamesis, a thirty-six foot shallop belonging to the Draper’s Company. Towing them from Oxford to Brittany was no mean feat, but other vessels from Great Britain had also made the crossing, including a thirty-three foot steamboat.

We launched the shallop at a pretty town called Nort sur Erdre where a jazz band was already playing to herald the festival de la Belle plaisance française.

Stephanie Pasgrimaud from France Televisions Pays de la Loire came aboard to interview me – in French and English for the regional News on France 3. 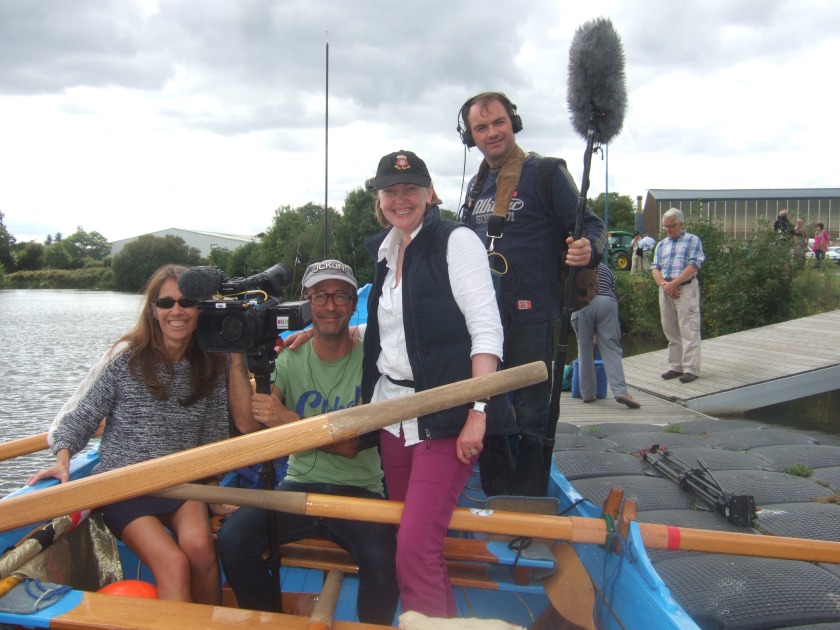 That afternoon we rowed some way down to Monsieur et Madame Courant’s B&B on the river where we met up with other members of the party and stayed for the next four nights.

I had the most lovely room overlooking the water; chambre d’Empire.

As the mist rose the next morning we put up our canopy to transport our passengers downstream.

We have a crew of six oarsmen,  with a cox and a wiffler. I alternated with others, taking on all three tasks.

We row in medieval fashion, one oar each, seated on a fixed thwarts.  Please click on the image for a history of the vessel. You may have seen our boat if you watched the Queen’s Jubilee pageant, rowing in third place, while old Father Thames glared down from our badge on the stern, elvers peaking from his beard. 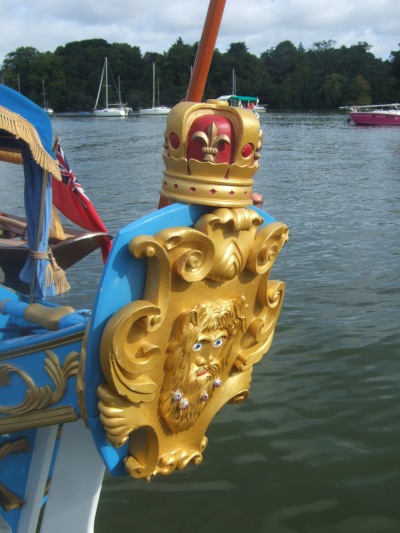 That first morning in Brittany we practised various manoeuvres before rowing a short distance to a boat club, where we moored for a picnic lunch. 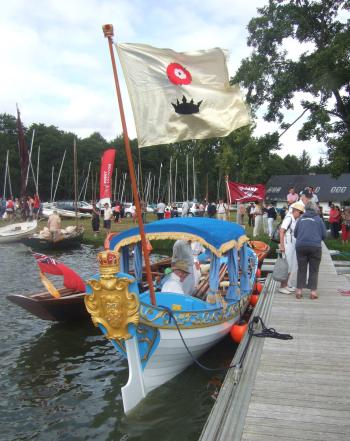 Here we met oarsmen from all over Europe.

Including those who row standing up.

where Stephanie was reporting on our progress for France 3.

Here the crews of the 240 boats taking part in the event were treated to a special dinner held outside with a jazz band playing sea shanties.

The organisers had brought together traditional boats, passé nautique, of many kinds. 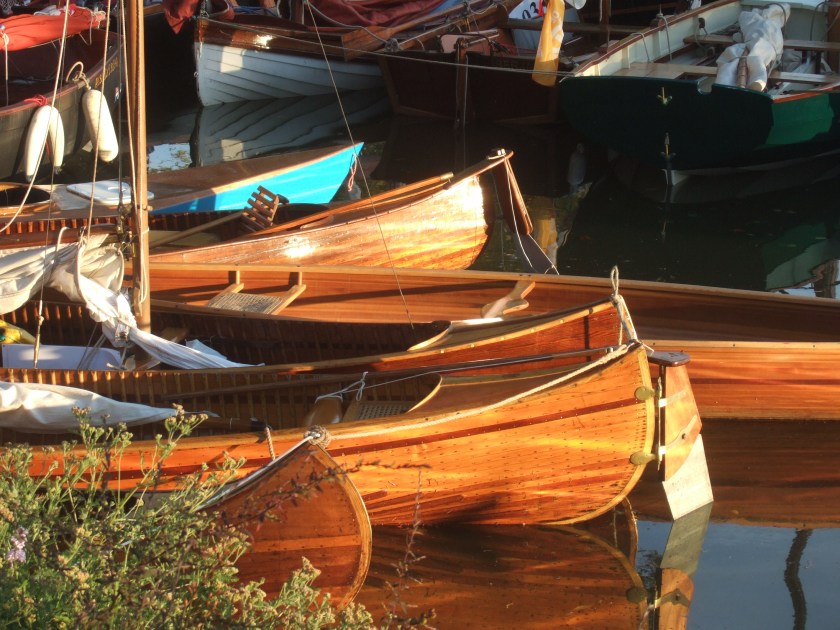 Although there were four steamboats and a number of canoes

At every stop for coffee or lunch, laid on by the festival au point de vue, we were accompanied by le jazz.

It was phenomenal. Much was traditional but new experimental jazz was also being played to appreciative audiences.

With the music came with the most amazing food.

We were looked after beautifully. 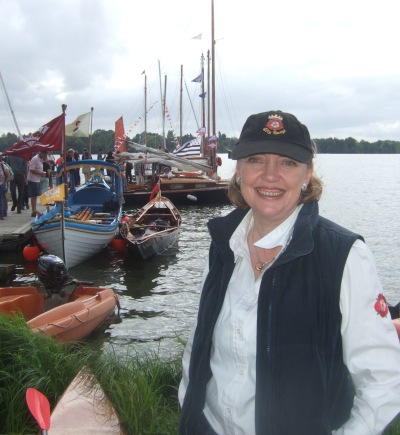 Having eaten well, with our passengers aboard once more,

we were honoured with the task of leading the procession of historic boats into Nantes. 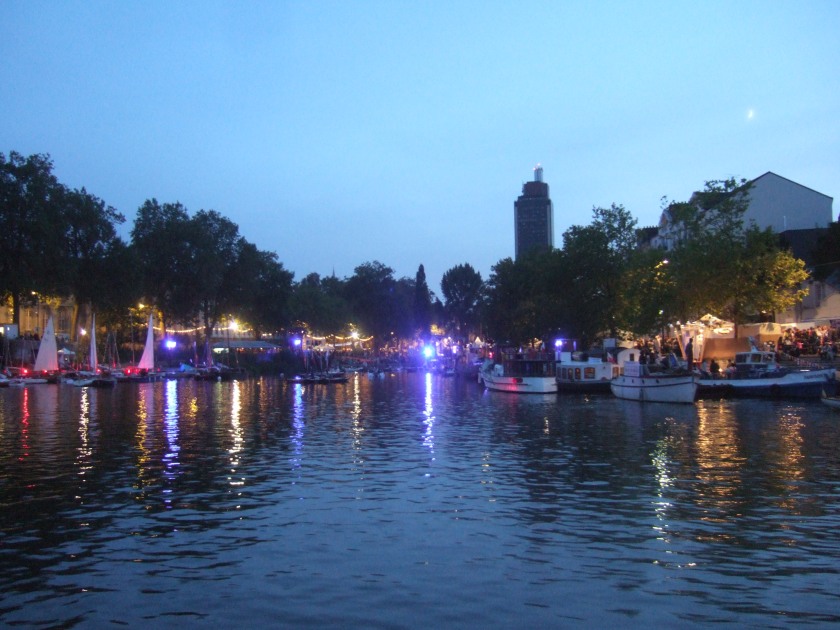 On the Sunday morning we were invited to the Hotel de Ville, the town hall 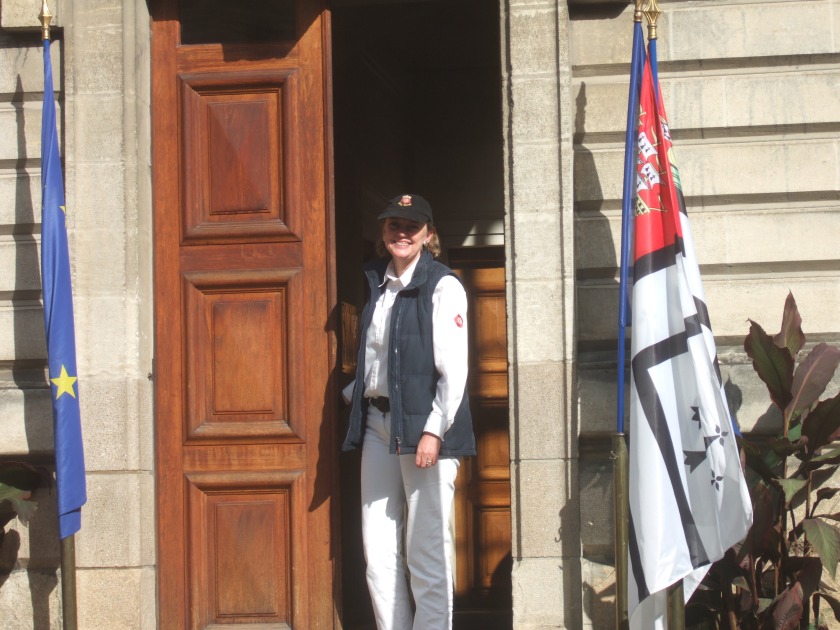 for a reception with speeches

and prize giving when our club, City Barge, was awarded a very large bottle of red wine.