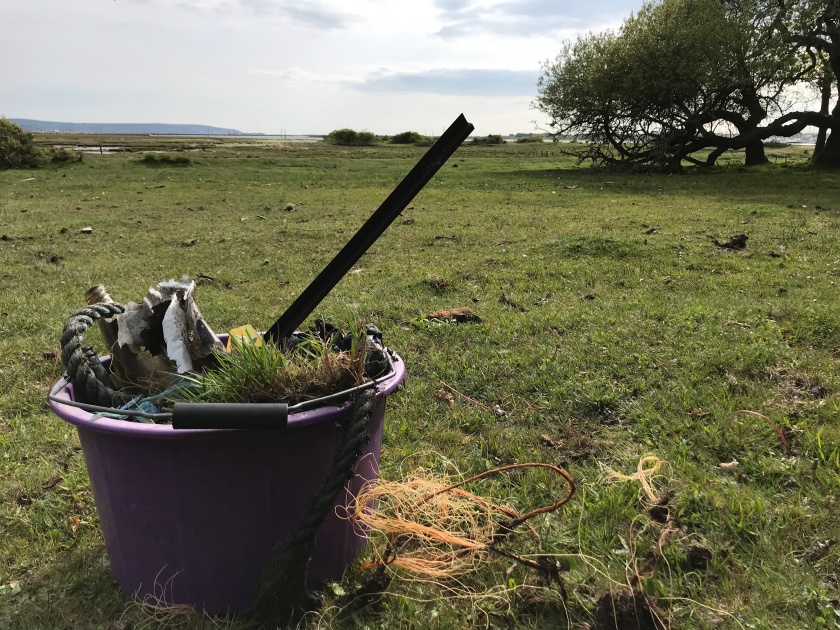 As a child, I collected sea shells on the beach. Now I walk by the Solent pulling rope and other litter out of the springy coastal turf, finding rubbish that has literally grown into the landscape. I often find litter that looks as if it has been previously ingested by New Forest ponies that graze the area. Some plastic had been around for years. How old is the Mars Bar wrapper or the bottle of Fair Liquid in this photo? 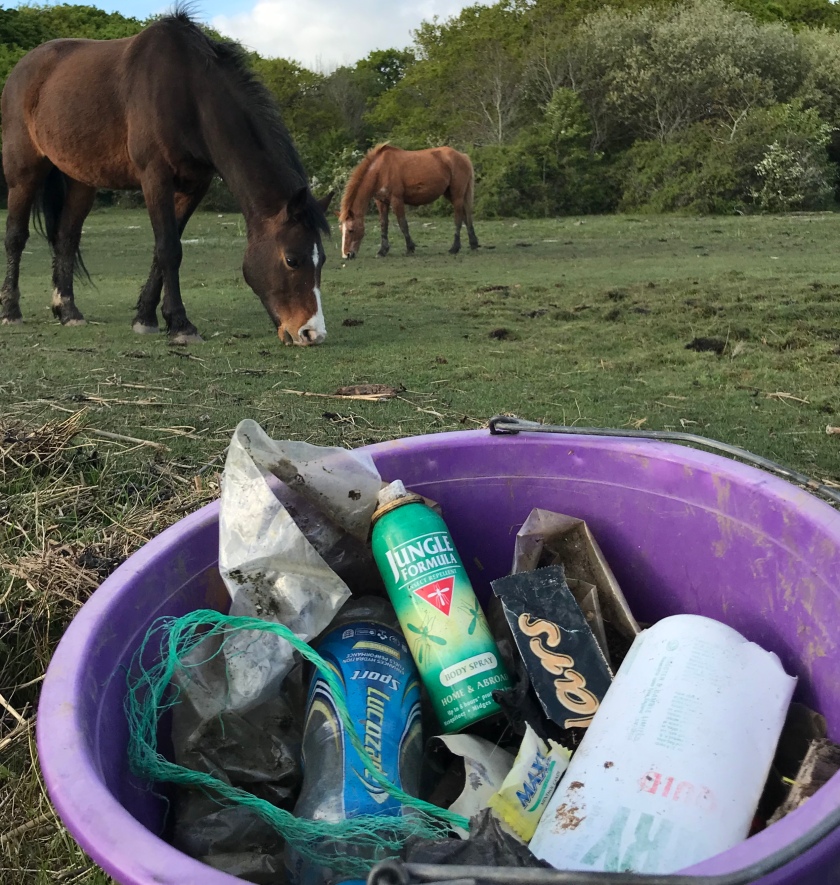 As I work, I’ve been thinking up reasons why it is good to collect litter:

Could you add to the list? Please use the comments box below. 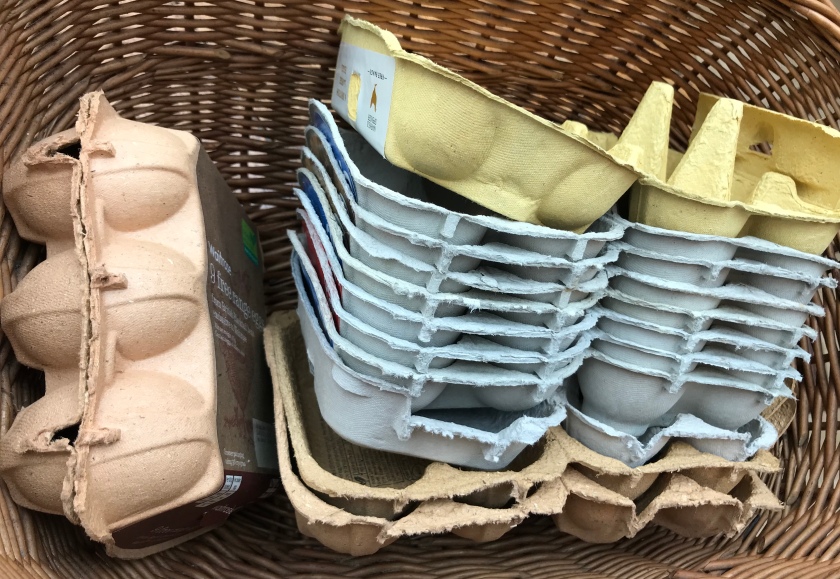 One Thursday in May –

I decided to count how many pieces of #plasticpollution I could pick up from the Solent shore in an hour. Since this was along a section of coast that I have been cleaning for years, most of the cellophane, plastic bags and other items had been washed in on the tide, so it took longer than litter picking: 101 items in one hour. 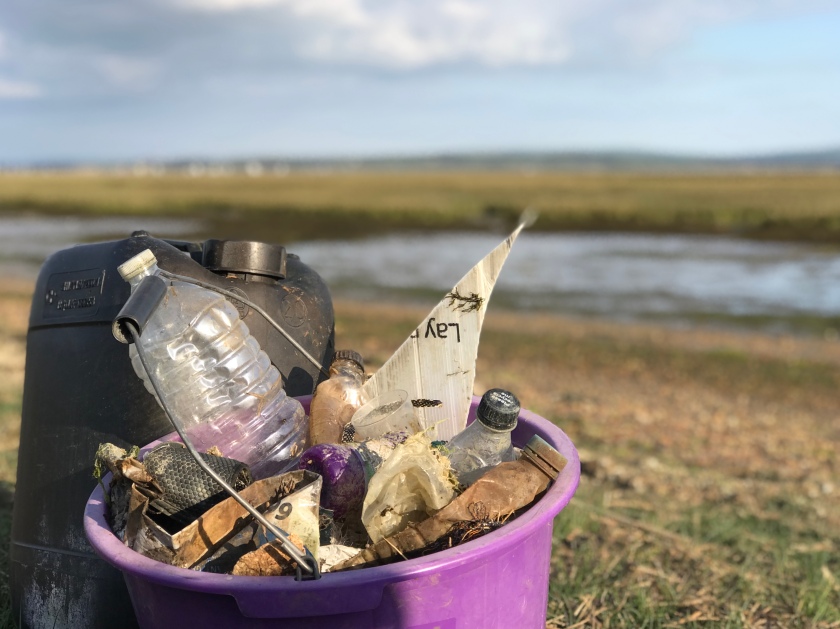 ~101 pieces of plastic pollution washed up on Solent shores ~

One Friday in May –

Tonight I walked westwards along the Solent shore, thrilled to find a plastic feed bucket, an unopened can of larger,a torch, a new tennis ball and a cap. I also picked up a helium balloon, black tubing, an empty bottle of rum and various pieces of rope from the fishing industry. My dog spotted an old flip flop.

~50 pieces of rubbish washed up on the Solent coast~

One Monday in May –

Since New Forest ponies, wildfowl and other animals graze on Solent shores I am keen on collecting broken glass. As there is no wave action, it remains sharp for decades. I can’t bear the thought of swans’ feet being cut. I collected this much in an hour but failed to reach it all.

I met two South Africans on the beach who told me more than fifty tonnes of rubbish had recently been washed onto the shore near Durban in the recent floods. 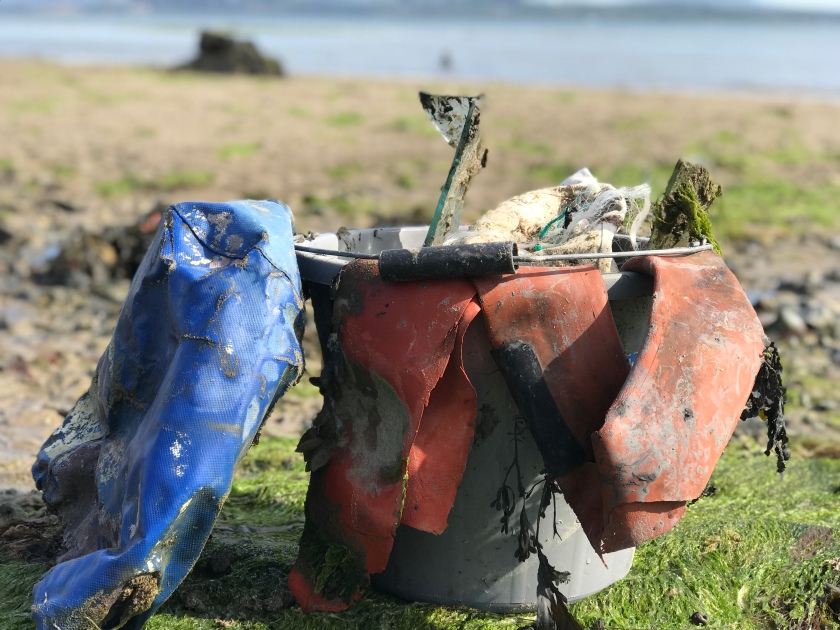 ~a cap, 2 balloons and about 50 pieces of rubbish and broken glass~

For a full list of items I’ve found on the same stretch of coastline, please click here

How many items could you collect in an hour? Were any useful? Please note your findings in the comments below.

14 thoughts on “The diary of a litter picker: 20 reasons why it’s good to collect trash”